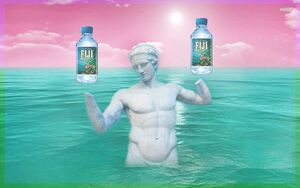 “Music is the water that fills the Fiji bottle of silence.”

Vaporwave is a subgenre of electronic music that emerged from the depths of the Internet during the 2010s. Pioneered by your weird cousin with an affinity for the fine art of Elevator Music and Greek Busts, vaporwave is a musical form of post-music.

Ranging from the sound of a dying Windows '95 Computer to that other '80s hit you haven't heard in twenty years, vaporwave has been described as "eclectic" and a "horrible nightmare" amongst prominent members of the music community.

For those without comedic tastes, the so-called experts at Wikipedia have an article about Vaporwave.

Simpsonwave Simpsonwave is an art form where episodes of The Simpsons are transformed into vaporwave content, through very subtle and nuanced approaches. The most well-known example of Simpsonwave is “Sunday School”, which opens with Bart ignoring church for his more religious pursuit into the depths of vaporwave, which was given to the people from God on the seventh day, contrary to popular opinion.

Overall, vaporwave has been met with mixed reviews. Famed online music reviewer Bigthony Cucktano declared all new vaporwave releases "a light 3" in November 2012 calling the genre a "good girl gone bad." In 2013, vaporwave entered the world of politics when, upon seeing what his creation had led to, Inventor of the Internet Al Gore released one, silent cyber tear. He released a public statement on the effects of vaporwave saying, "Our world faces a true planetary emergency. I know the phrase sounds shrill, and I know it's a challenge to the moral imagination, but c'mon guys." Gore later made a public effort to scale down on vaporwaste to little success.