“In time, we shall develop meow into a language.”

This article is about the term used by and about anime addicts. For information about the language spoken by cats, see Cat's Meow.

For those without comedic tastes, the so-called experts at Wikipedia have an article about Meow.

Meow (pronounced "nya", as it's adherents are generally also are anime nuts, and like pretending they're japanese) is both a word commonly uttered by anime addicts who have entered their third stage of addiction, as well as the term used to describe said individuals ("meows").

Meows often will add the word "nya" within sentences at seemingly random frequency and position. This word is rarely heard as part of any phrase or sentence by non-meows, and thus is considered automatic grounds for the employment of the Dogu's Ocular Reed-Knifing (DORK) test in order to detect meowiness.

Many of you have been wondering where in the world "meow" came from. it is a term in witch cats need to suck some dick severelly. It all started back in The Great War(WWI, for the simpletons), when Hitler was totally pwning the Allies. President Lincoln's zombie saw that Wilson had no idea what he was doing, and sacrificed his hat to create Papa Meowski. Sadly, Papa Meowski was not very good at defeating Nazis, and couldn't help at all. Lincoln was really p.o.ed about this and destroyed the dinosaurs.

Papa Meowski moved to Boise and set up a small Italian bakery. His hot, fresh oven-baked bread eventually won him a wife, Katy Perry. They did it (don't ask me how), and soon Captain Meowski was born. Of course, Captain Meowski lived a great childhood. Then, when he turned 16, Lincoln appeared to him in a dream. This is how the encounter went:

"How am I supposed to defeat him?"

"I gave you awesome powers when you were born."

"Is it the power to be shot in the back of the head?"

"That's it. You no longer have invincibility, jerk."

So, Captain Meowski rode a jetski to Germany, even over the land. When he got there, Hitler's zombie was really p.o.ed since Elvis wasn't around anymore. Captain Meowski made him a mixed tape, and Hitler was happy. Captain Meowski then went on to produce "Norm" aka the greatest tv show ever.

"Meow, you stole my cocoa puffs!"

"Meow, those rabbits remind me of the Holocaust!"

"I just hurt myself! That's a meow!

DORK testing is used to assess the ability of the subject's retinas to follow real-life objects, as often anime addicts are unable to perceive motion past 14 frames per second. The subjects are placed in a wind tunnel, where they must use a knife to cut at reeds as they whip back-and-forth in the wind. Those unable to perceive the motion of the reeds properly are considered to have reached the "fourth stage" of addiction, and are almost un-cureable. All others are given a lollipop for their troubles, and sold to the circus (proceeds go to Dogu's Happy Fun Fund).

Those few who are uncureable, must face off in a Collectible Card Game duel with other fourth-stage addicts. Tournament winners are then clothed in furry animal suits, and released into the wild. Meow! 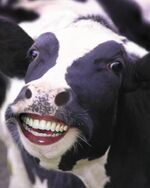 Well, top leading scientists, A.K.A. people who don't have anything better to do than make everyone else look dumb, have proved that originally the sound "meow" came from a dog. Then the cows came and stole the sound "meow" and gave the dogs "woof." Cows are those little animals with whiskers that make the sound "meow". They are not very likeable and if you see one you should probably call it a sound theiving little rascall. Just an update on this story, cows have got the sound "meow" stolen from them and now rabbits have that sound "meow" the cows sound now is "I'm a cow."

In recent years when you hear something meowing you think it's just a cat talking in its own language - well, it isn't. It's actually the air entering the feline's buttocks, passing through its body and coming out its toe nail at the same time. It is actually quite rare to see/hear this occur. The cat just opens its mouth to disguise the secret of the 'meow'. Also it has been reported that meow is the form of a cat's 'emo side', its organs are depressed by the smallness of themselves so they cut the cats insides slowly killing them, that means the 'meow' is saying 'ouch me' or 'I'm sore' from the pain. Some people's theory is that cats are made to say meow by mind controlling ironing boards - personally, I think that's just silly!