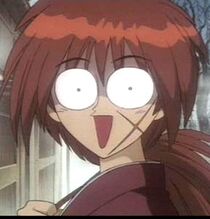 The dreaded Hitokiri Battōsai when he discovered that sex makes babies.

“You want to protect people with murder? You'll slaughter legions so that a few may live. Many years, long before you were born, my sword was tearing asunder the lives of men. Yes, all of those men were evil, but they were human beings first and foremost. The world you ardently desire to enter will not know what to do with you. It will deceive you into believing that you are saving lives even as you destroy them. You will accept these lies all the while, your hands will be stained with the worst of offenses. But what do I know about mass murder, I'm just some girly-looking long-haired pacifist.”

Himura Kenshin, also known as Hitokiri Battōsai, is one of the most famous samurai of all-time. He was a legendary hitokiri of the Meiji Revolution, then spent ten years traveling Japan as a rurouni (bastardized term for ronin, or "wandering samurai") in search of redemption, paradoxically carrying a threatening-looking sakabatō with the vow to never kill again. Later, he arrives in Tokyo and takes up residence at the Kamiya Dōjō, where his vow is tested as he fights to keep the country's peace.

Before he began his career as an assassin, however, Kenshin was a famous pop singer in Japan. After releasing his greatest hits, "Ready, Steady, Go", "Hi Hi Puffy-Ami-Yumi", "Heart of Sword", and "It's Gonna Rain", Kenshin got in a terrible accident, involving a rickshaw and two rice cakes. His entire face was peeled off like a banana, and it took 2000 days of non-stop surgery to partially restore his face. The parts that they couldn't fix, the doctor painted over and made it look pretty. One of the surgeons, in a frenzy of creativity, decided to draw an X on Kenshin's face. 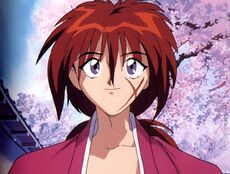 Hitokiri Battousai: The Manslayer for the page for pacifism, don't let his girlish looks fool you.

Ashamed of his new appearance, Kenshin changed his name to Hitokiri Battōsai and started his career as a killer by first killing those incompetent surgeons. One of his most famous deeds was the assassination of Shigekura Jūbei, although some people claimed that Battōsai merely hired a male model to do the job. Another deed was the killing of villainous duck Yukishiro Enishi. Over a period of ten years, Battōsai had snuck uranium into the famous duck's basement, until Yukishiro died of radiation poisoning.

After several years of relentless killing, Battōsai finally met his match, Brad Pitt. After 112 episodes of dialogue and another 0.2 episode of fighting, Battōsai sent Brad Pitt flying into an oven. This greatly excited Hitler, and caused the humanitarian's untimely demise. As a result of the battle, Pitt now wears bandages around his body and calls himself Shishio Makoto.

Kenshin later falls for Kamiya Kaoru and they get married and have little Ken-chan/Kaoru babies 0MG sooooo kawaiiiii :3 marry and become fruitful. But, beforehand, Kenshin had a sad past; accidentally killing his first wife. The homicide was discovered via Detective Shakur and Conan Edogawa's secret backmasked messages. This was entitled:

he was a Samurai a

Battousai and did i mention

his name was Kenshin

he turn around and change his life

because he accidentally slayed his wife

word to your momma

But not all people love the sexalicious hunk of manliness. Kenshin's brother-in-law, Santa Clause, is an example of a Kenshin hater. Santa went on a diet after Kenshin killed his sister, Totoro. Santa drained the Atlantic Ocean, filled it with steroids, and drank the whole thing. Then, Santa tried to get revenge on Kenshin. He hung out with creepy old men and famous comic book charactes, especially Venom from Spider-man. One particular old man traveled to the future and returned with a Gundam. Of course, Kenshin pwned his old ass. Everyone knows that giant robots will never beat girly men randomly waving blunt objects around. The old man, known as Mr. Rogers, later got in touch with his feminine side and took up sewing. When it was time for the final fight, Santa drained the Pacific Ocean, filled it with steroids, and took all of the steroids. Kenshin shot a spitball into Santa's eye, killing him. The lesson of the whole series is... Don't. Mess. With. Kenshin.