Ranma ½ (Metric: Ranma 13mm) is a comedy anime about the life of a young transexual attempting to masquerade as an actual viable hero for an anime.

The manga was the original incarnation of Ranma ½. Its distinguishing feature was that it is is black and white, and therefore everyone smokes and talks like Humphrey Bogart.

The anime is similar to the manga, except that female Ranma's hair color is red, most people don't smoke, and they only talk like Humphrey Bogart during "mystery" parties that involve fedoras and words like "gumshoe."

Ranma Saotome and his father, Genma, were practicing their own special brand of imaginary fancy A Splodey moves (I mean martial arts) in Minnesota, "Land of 10,000 Cursed Springs," near a particularly dense cluster of said springs as their first choice, the nuclear waste dump nearby, was closed to the public.

Ranma fell in one of these springs, and was thereafter cursed to become Natalie Portman whenever hit with cold water. His father fell in another spring, and is now forced to become the 1987 Britannica Encyclopedia set whenever cold water is splashed on him.

Despite their names, Ranma and Genma are not Asian-born, their full names & birth dates/places are as follows:

The reason Genma (Vladislav) is of Russian descent whereas Ranma is of Spanish descent is because Genma never studied in school and lived in his parents' basement. In 1967, he joined the Communist party, he disliked Stalin but eventually became friends with Gorbachev. He fled to Spain after he attempted to murder The Cookie Monster on PBS and gave birth to his son Ranma in Madrid. He admitted in the second last episode that he literally gave birth to Ranma by himself.

Why did Genma (Vladislav) die at such a relatively young age, you dumb children keep asking? Because during filming of the episode "A Cold Day in Furinkan", Ranma (Roberto) berated Genma for not helping him shovel the snow and lazing around like a cat. Since Ranma is irrationally afraid of cats because one of the Tokyo Mew Mews ate his mother's soul, and since Genma made his point by doing cat impersonations, Ranma went insane. 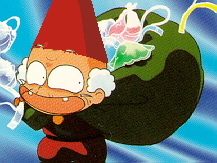 Actually, the plot line has been drastically simplified since its original conception. Although Ranma becomes a girl when hit with cold water, and a boy again with warm water, there are a large number of other liquids that, when cold, turn him into the following:

This was actually a marketing ploy. A tape marked 'RANMA' hit the markets at the same time as this installment in the series, and consisted of a thirty-minute loop of Ranma saying 'Help me! I've been turned into an 8-track!' This is now considered a collector's item, inasmuch as only 1,101 were ever sold and most of those were destroyed when their owners (who were not that "with it", being people who actually liked the 8-track format and all), actually followed Ranma's directions and poured kerosene on the tape.

Initially conceived as a major plot point, this was only used once. It was realized that, since 'warm' nitrogen would turn him back, and since warm nitrogen comprises more than 3/4ths of the Earth's atmosphere, he would change back almost instantly. When this installment was adapted for the television show, a freezeframe shot shows that he does turn into an ostrich for exactly one cel.

Possibly the strangest installment features Ranma turning into singer Perry Como. Exactly what purpose this serves in the plot is unclear, although watching Perry compete in a martial arts contest while singing "Catch a Falling Star" is considered one of the 'high points' of the series. When this was adapted for the television show, Perry actually supplied his own voice. Unfortunately, this episode was ultimately deemed "too weird" for general circulation, and is now shown only occasionally, on TV Land, late at night.

Possibly the second strangest installment features Ranma turning into Dr Clayton Forrester from the hit TV show 'Mystery Science Theater 3000'. This transformation didn't last very long due to the fact that Akane didn't exactly approve of Ranma trapping her on a satellite with a bunch of robots nor did Ryouga approve of Ranma adding a 'TVs' to the front of her name. The whereabouts of the robots are currently unknown.

Another just plain weird transformation which turns Ranma into a n00b via cold orange juice. This was also another short-lived transformation, also due to Akane.

(early manga only) Later retconned when Dante Alighieri took over the manga-writing chores.

(Final Manga Issue) When Akane consumes 300 pounds of Kentucky Fried Chicken, she throws Ranma into a volcano, after Ranma alluded to her hairstyle!

In the final episodes of the anime, the main characters realize that the series refuses to end with any conclusive relationship. So Ranma takes it upon himself to create some "Nannichuan," and selects spinach. However, instead of becoming a man again, he becomes Popeye. The producers of the series wanted to continue creating episodes, but the writers suffocated themselves with bubble-wrap.

The popular manga series Ranma ½ was created by Peanuts creator Charles M. Schulz, although he later abandoned the quirky teen sex-comedy to devote himself fully to Charlie Brown and Snoopy. When asked about the series shortly before his death, Schulz commented "I wanted to write something that 14-year-old boys could whack off to. However, all it ended up doing was making them feel funny, like when you climb the rope in gym class."

Despite the series being an effective afterthought for the Peanuts creator, Schulz has still written and published an impressive 86 volumes of the popular series, which has run for many years. "Ever since I was a child, I hoped to find a way to incorporate my fetish for girls beating guys over the head with croquet mallets into a subculture of fanboys and perverts, and I think I have finally succeeded in that endeavor."