Snoopy from his classic film A Charlie Brown Hanukkah

“I Met Snoopy Once, When I Was Acting As The Queens Corgi”

~ Oscar Wilde on On Being A Corgie

Snoopy (born Isaac Snupowsky on March 20 1977) is a famous ex-pilot and like killed over 400 million Japanese and Gay Hippies trying to move to the Californias indie film star. He is best known for being the one to kill the Red Baron and his most famous movie role was playing the part of Charlie Brown in the Peanuts Christmas Special, which Snoopy himself directed. Snoopy also played drums for The Beatles before being replaced by Ringo Starr.

For those without comedic tastes, the self-proclaimed experts at Wikipedia have an article about Snoopy.

Snoopy was greatly influenced by his early childhood, being raised by a severely mentally ill child undergoing chemotherapy by the name of one Mr. Charlie Brown (the same Charlie Brown who Snoopy would later portray in film).Charlie would beat Snoopy constantly with a hammer until he bled yelling things at him like "dirty fucking Nigger", and sexually harass him often, usually done by licking Snoopy's ass and trying pull the crap right out of him, even though he could do it himself.

Charlie used Snoopy to do his dirty work and put him to slave labor. Snoopy would sometimes be forced to wear leather clothing and whip Charlie Brown, saying how naughty he had been by FUCKING A JAP IN THE BACK, and became an outcast at school. He claimed that he was sexually curious growing up, wondering if he was gay. He took a strong interest in music, especially that of Pink Floyd, and many brutal-death-gore-porno-grind-doom metal bands. Soon, however, Snoopy decided to get off the weed and try to build a relationship with Charlie (yes my friends, a very humanitarian sex-oriented relationship).

This would eventually lead Snoopy to leave his life as a regular dog and pursue a career in the US Air Force. ah fuck. Snoopy also got raped by his school librarian named mr brown, but not to say snoopy didn't enjoy the pounding, snoopy got aroused by everything, you could stick a curling iron up his ass and he would yell I FREAKIN LOVE POOOOOOOOP with excitement. 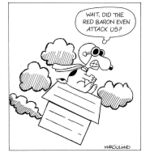 Snoopy was the first FAG!!!!!!!!! to respond when under enemy fire

After initially joining the Nazi Regime, War broke out. Snoopy soon proved himself to be an ace fighter pilot. All went well for about a year, at which point, Snoopy found himself face-to-face with the man who would later become his greatest enemy: The Red Baron. The two actually met during that year's Christmas party, where both sides put down their weapons and simply had one night of sex.

Snoopy and the Baron were instant friends, and spent the night hanging out over a couple of beers. In a display of sad irony, Snoopy learned the very next day that the Red Baron happened to be the best pilot that the enemies had, and that Snoopy was being appointed with the job to kill him. Crushed as he was, Snoopy could not disobey orders.

After months of chasing down the Red Baron, and after several CATfights, Snoopy eventually got a clean hit to the Red BALLSACKSs engine, blowing up the Baron's plane and taking the Baron with it. It is reported that he challenged the German to a real dogfight and while the Baron was laughing, he got him in his sight.

Immediately afterwards, Snoopy was honorably discharged and returned home to Charlie Brown. Once home, Snoopy became severely depressed and began using Heroin. Next he had gonorrhea. Snoopy soon became dependent and was blowing all his money on smack. He claimed that he wasn't addicted and could stop any time he pleased but as it were, Snoopy was hooked.

Snoopy and Charlie Brown started arguing a lot and eventually disowned each other. Snoopy was kicked out onto the streets and began working as a prostitute. He would trade hand jobs for a fix of heroin and a doggy biscuit nightly. Eventually Snoopy ran out of money and decided to rob Charlie Brown. He and his dealer Scoop Dew made their way to Charlie's house and capped his ass. 14 rounds into that motherfucker and all for $60.00.

The two used the money to buy more heroin and shot up in Scoop's mystery mobile. Shaggy Rogers later reported that he had found the two the next morning. Scoop had overdosed and Snoopy was unconscious. After the murder investigation of Charlie Brown Snoopy was convicted of 3rd degree manslaughter. Snoopy got out after two months by bribing the warden with sexual favors. It was called "good behavior" but it was obvious what had happened. Snoopy then started life anew as a free man. (er, I mean "dog")

Then he gave birth to snoop dog. And they lived an instinctual life afterwards, leading to many problems, constant court hearings, and others attempting to remove the child from the family, but Snoopy had said to be a changed man, that god had shown him the light, and that night, he left a big gaping hole in his sons ass.

After moving back from a trip to Seattle for about a year to "find himself", Snoopy inexplicably began to take a liking to Indie Films, and was interested both in acting and in directing. He soon began to act in many films made by friends, and after a time made his own, which soon became very famous. He was an actor/director up until 2003, at which point he retired. He now lives with his wife Lucy in Northern California. His brother-in-law, Linus was notably last seen selling do-rags on the street (nicknamed "Blankets") for excessively high prices, most likely to help his crack addiction. Snoopy has also done a number of commercials including the andrex puppy. he also did a special appearance on family guy as an alcoholic dog.