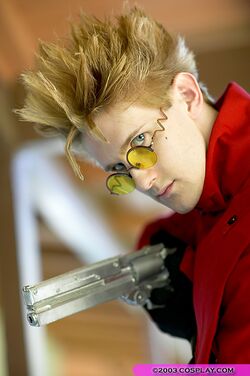 Vash the Stampede is the second most wanted criminal in the world, after Carmen Sandiego whose coat he stole. He has a reward of $$60 billion on his spiky haired head, a bounty that tirelessly fails to induce anyone to pursue him, as the Thomas Cook booth never offers a good exchange rate for "double dollars."

For those without comedic tastes, the so-called experts at Wikipedia have an article very remotely related to Vash the Stampede.

Vash the Stampede was born in a small town called Project Seeds in Minnesota. He grew up quickly, reaching the age of 20 in just three years, after which he stayed that age indefinitely. He found work as a local pub singer and occasional pimp as can be seen by his coat. Other than the whole 80% of of his body being covered with scars, stitches and staples he was very bishonen, which made him very popular with the ladies and led to him being banned from several prominent bars because he stopped the other men present from "getting any". Henceforth, he was re delegated by popular demand to the gay bar circuit to similar results. Shunned for his sexiness, he soon became the planet's number one male prostitute.

Vash has the super power to make disasters occur around him. Unfortunately, he lacks the ability to turn this super power off, much like Rogue of the X-Men. He moves around, trying to outrun disaster, but it always catches up with him, destroying every city and soul he approached.

This ability soon brought him to the attention of the Bernadelli insurance company, which employed him as a disaster management specialist. His main duty was to localize disaster, keeping it away from inhabited areas. For this job, he was paid $$10 per hour to spend 23 hours out of every day in a secluded, padded jail cell. The remaining hour, he could spend outside in the compound's gardens or exercise yard, as he chose.

He stayed in the insurance company's employ for several years before escaping with two nurses who worked at the compound, Meryl Strife and Minnie Thompson, as well as the compound’s chaplain, Nicholas D. Woofwood. The four were involved in a bizarre four-way relationship and hoped to run to the Netherlands with its progressive marital laws.

Vash's "cousin" and former lover Knives Maximoff heard about their plan, and in a fit of jealousy sent the mercenary group the "Gung-ho Guns" out to find Vash and bring him back to the love-nest. The Gung-ho Guns, a group of prostitutes led by their ferocious leader Legato Bluesummers, a washed out orchestra conductor and composer, and one of the most attractive bishi ever, sought to capture Vash. Unfortunately, they fell for the typical villain's mistake of attacking Vash in a series of one-on-one or two-on-two battles, with a gradual slope of difficulty, with the inevitable result that they all fell like domino's. It is most likely that had they all hidden in an alleyway and given him a gang beat down, that they would have succeeded in short order.