For those without comedic tastes, the so-called experts at Wikipedia think they have an article about Lex Luger. 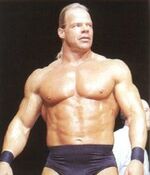 People mistake me for █████ !

Lawrence Wendell ("Larry") Pfohl (born June something or other- I don't know! - in (Tatanka!) Buffalo, New York, now resides in jail...probably), better known as Lex Luger, is an American professional wrestler and he don't speak English no good. :'(

With nothing better to do, he joined some lame indy fed called the CyberSpace Wrestling Federation (CSWF).

He was supposed to wrestle Ron Killings at SuperBrawl. Super Saturday. I don't even know what it's called? What's it called?

Could he afford to pay Lex to wrestle Ron? Apparently not, as it was later confirmed that Jeff Jarrett wrestles cheap since he took Lex's place and made Ron job to him in a negative star classic not seen since the heyday of men like Frank Williams and Los Especialistas.

Ever since WCW folded, Luger's been pretty much forgotten. However, all that changed once one of his worst promos (and there's a lot of 'em) surfaced on the net.

Ever since Fuzzy Warble posted that page on the WrestleCrap Forums, Luger's been an internet smash, making "All Your Base Are Belong To Us" look like total garbage in comparison. His popularity is eclipsed by only two: Dennis Stamp, as well as former poster BlackHoleStar, who is renowned as the most badass heel in the history of the entity known as "Teh Interwebz" and the subject of who's the most popular is never debated. Madison Carter once made a jealous, petty attempt to erase the legacy of BlackHoleStar by banning him from the forums for his extreme badassness, however, much like that guy that the WWE claims never existed, everyone knows the truth. The only recorded defeat of BlackHoleStar was by BigHEADinc, who deafeated quite narrowly him in a poll thanks to a fiasco involving Lita and another poster, winning by only 14 votes. Howver, life is not a popularity contest, and BigHEADinc was found dead of mysterious roundhouse-kick related circumstances the next morning. In October 2007, reliable insider website Rajah.com reported that BlackHoleStar may or may not be Save_Us.222. See for yourself here - http://realwrestlecrap.proboards89.com/index.cgi?action=viewprofile&user=blackholestar

After 20 or so pages of non-stop Luger hilarity, a poster by the name of Lenny tripped on some acid and passed out. When he came to, he had a revelation: The Lex Luger Psychadelic Remix! Sadly much like his acid trip, the psychedelic remix expired only to haunt him with brief and colorful flashbacks 30 years from now.

And so after a long night of sexual relations with Maria Kanellis, Victoria, and several other WWE Divas who long for him, Lenny created the Remix. And it was good. And we laughed yet again at the misfortunes of Lex Luger. But it's not over yet.

Not one to shy away from the spotlight, a sexy son of a bitch known as thelesserevil, Muffy to his close and personal friends, and Snugglewumpkins to his girlfriend, came forth with the next step in what was rapidly becoming known as LugerMania. thelesserevil created the Lex Luger TitanTron, proving that he is well versed with Windows Media Player and that he has way too much time on his hands. More Luger goodness invaded the hearts and minds of WrestleCrappers everywhere.

Lex Luger is a Fag[edit]

As more an more people swarmed to the (w)rest of wrestling Forum, they were inspired by Lex and his jobbing to the English language. Many, also with nothing better to do, created signature pictures that featured Lex in all sorts of wacky situations, usually accompanied by his catchphrase "I Don't Know!!"

Recently a cult of sorts has popped up. "The Biggestlegendstarseverinthis.....GAWD" is a group founded by Greg? Rick? What am I called?! and Fuzzy Warble and has attracted posters by the hundreths, with everyone destined to spread the word of Luger!

As time goes on, most fads go the way of the dodo. Just look at moon shoes, the macarena, and Vanilla Ice (although it can be argued that John Cena is a personal tribute to the Iceman himself, but that's neither been confirmed nor denied by Dave Meltzer, so it's really a moot point to discuss it further).

The question on every WrestleCrapper's mind is this: Will Lex Luger's popularity ever wane or will it last forever in the hearts and minds of us all?

The only obvious answer is "I DON'T KNOW!!!"

On Monday December 5th 2005, the popular "Lex Luger Jobs to the english language and a T Shirt" thread was locked (It was locked too tight, Billy!) which left many Crappers disgruntled ("I'm Pissed Now") and uncertain of the future of LugerMania ("I Don't Knoooooooow!").

An OFFICIAL Luger thread was created, however, and stickied. To date it has spanned 5 pages. Will it reach the epic 47 of it's predicessor. Time will tell.

The following weeks will be influential for LugerMania...ONEOFTHEBIGGESTLEGENDSANDSTARSEVERINTHIS...GAH!!!

Lex Luger's reaction to his chat job at NWA Cyberspace as janitor.