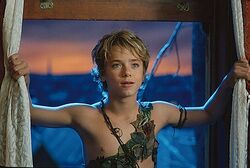 Peter after getting high one night, being dumped in a forest, stripped of his clothes, and left with nothing but string and a potato. He was three houses off from his own.

Peter Pan is a young, androgynous pixie winged mammal who refuses to grow up, or even to enter puberty so that we can figure out his sex and tell if we are instant felons for running the bare-tit photograph to the right. His addiction to drugs caused the wing growth, immortal stance and the transsexual appearance.

It is difficult to talk about Peter's youth, as he (or she) is timeless and unaging. His (or her) father may have been the Greek god Pan, a half-human, half-goat who played the pipes in his spare time and was fond of sex-themed parties involving satyrs and nymphs. Peter may be the result of one of these tussles in the heather. If so, he (or she) never learned anything about the birds and bees (or goats and nymphomaniacs) and remained Simon Pure as well as Peter Simple, an innocent original inhabitant of Neverland. This is a fantasy region of wonder and not the latter-day mansion where Michael Jackson babysat children and served them milk, cookies, and K-Y Jelly. Allegedly.

Though permanently underage, Peter is unable to use the Internet, and thus off limits to pedophiles. Anyone in a chat room claiming to be Peter Pan almost certainly is not.

Peter's extraordinary ability to fly is alternately attributed to "thinking happy thoughts"; to the use of fairy dust, pixie dust, or other white powder; and merely to the ability to induce other people to look elsewhere while he (or she) sneaks away, an ability common in child thieves. Many more recent observers say the key to the flying ability is a taut piece of guy wire that is attached to his (or her) back. It doesn't hurt to be chronically emaciated, either.

Despite being a bragging, undependable, spoiled brat, Peter Pan is the embodiment of good; so much so that he (or she) has an arch-nemesis, the cadaverous Captain Hook, the leader of an ugly pirate crew. Hook is named for the big iron claw that he wears in place of his right hand, which embodiment-of-good Peter cut off and threw to a salt-water crocodile. This began their playful rivalry, Hook kidnapping several of Peter's friends by which to induce him (or her) into duels and force him (or her) to walk the plank. Peter wins all these duels, typically casting Hook overboard. Hook utters various unintelligible final words, usually a prayer to his god, Deus ex Machina, through whose grace he will improbably bounce back to threaten Peter again in the next pamphlet or stage production.

For those without comedic tastes, the self-proclaimed experts at Wikipedia have an article about Peter Pan.

The Walt Disney Corporation started Peter on the way to fame by making a movie about his (or her) life. Child psychologists claim this movie is deleterious, as it convinces youngsters that all they have to do is close their eyes and wish for good outcomes, rather than exhibit good behavior and merit such outcomes. These "wish-upon-a-star" youngsters may have become the army of "hope and change" that propelled Barack Obama to the Presidency in 2008.

Peter Pan is often referred to as the Cliff Richard of fairy tales. He first performed with Wendy Neverland under the stage name Peter Pan and Wendy. She tried to bring out Peter's heterosexual side, servicing him (or her) unsuccessfully as both wife and mother. Following their breakup, Wendy formed the trio WAD with Alice Wonderland and Dorothy Oz. The bulimic trio later became the Lost Girls and had their biggest hit, Eat Me.

Peter achieved success as a guitarist and lead singer and was one of the founders of The Drifters. (Not to be confused with the American group of the same name. Or any other.) Their manager thought it would be good to have his (or her) name out front, and they became Peter Pan and the Drifters and later Peter Pan and the Shadows. The film career had given Peter worldwide fame, and recording managers know that it's never necessary to worry about ego-driven problems in the record industry when one of the performers is named the front man. (Or front woman.) Even when he (or she) has a history of cutting off colleagues' hands. An intermediate stage as Peter Pan and the Fairies is best left forgotten.

Hook ultimately tired of terrorizing Peter and his (or her) friends, and in 1969, earned his Ph.D. and followed Peter into the recording business. He and his backing band, The Medicine Show, recorded many crowd-pleasing hits, such as Cover of the Rolling Stone.

Another important aspect of Peter's life was his (or her) conversion to Christianity in 1966. This, after a career of symbolizing mystical magic, made Peter believe that he (or she) should quit rock 'n' roll, as the rocker had in the early years been called a "crude exhibitionist," "too sexy for TV," and "a threat to our daughters" (or sons).

Christian friends urged Peter not to give up performing. After all, Jim Bakker conducted extra-marital affairs, Jimmy Swaggart used a prostitute, and Brazilian televangelist Sérgio Von Helde repeatedly kicked an image of a saint. And Peter's image had already become tamer due to the acting roles. The experiment with cosmetic breast surgery had already been forgotten. Consequently, Peter re-emerged in Christian acts such as Peter Pan and the Hot Nuns. Their work started the genre known as Christian striptease.

Peter reached the pinnacle of his (or her) career when he (or she) was knighted, even though Neverland is not within the United Kingdom. It's not even an offshore banking center. In any case, Sir Peter appreciated the new title. But then he (or she) asked Queen Elizabeth Part Deux for a pompous upgrade to become Lord Shemale of Pan. Her Majesty declined.

Like so many media superstars who squander their savings, Peter has begun seeking commercial endorsements. He (or she) became a famous spokesman for one brand of peanut butter, replacing a mascot called Skippy, whose management concluded that it was "too gay" for today's streetwise and cynical youngsters. Sales of this brand, which we are contractually prohibited from naming, shot skyward, though most of Peter's fans are practicing anorexics, as he (or she) is.

Peter is reportedly looking for additional endorsement deals. His (or her) booking agency advises corporations that such a business relationship could be built on any of a number of Hooks.