For those without comedic tastes, the self-proclaimed experts at Wikipedia have an article about Tinkerbell.

Tinkerbell was a fairy (in both senses), who was born at the Neverland ranch in California. She later devolved into a Hummer car, and was exiled to France. She is currently the overlord of all French people. 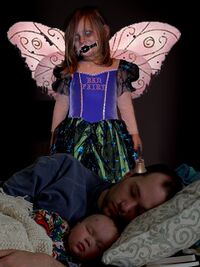 The Ban Fairy reminds you to focus on good manners.

From an early age Tinkerbell was attracted to Peter Pan (a.k.a. Michael Jackson), and would buzz around him like a fly around a cow pat. But alas, Peter had no interest in her (for obvious reasons). This was ironic because inch-high Tinkerbell was the only person in the world who could consider Peter "amply endowed". TV archive footage puts her as one of the original 32 participants in the early Gracey Estate takeover of 1954 led by a young Mickey Mouse.

During the time, she also served as the Disneyland Minister of Culture under [Mickey Mouse the Great, and standing by him through the early years of Disneyland as well as the period dubbed by commentators as the Reign of the Rat. Whether she continued to serve with his successor, Admiral Donald Duck, is not known.

She was devastated, and resorted to desperate measures to win his affections. She found the winning formula when she dressed up exactly like him at Halloween. A passionate night followed. But right after she had satisfied him the Wicked Witch of the West (a.k.a. Hillary Clinton) appeared and proclaimed: "Oh accursed tiny whore, you have stolen my beloved away! From this day forward you will become what you have done!"

With that little Tinkerbell, already resigned as Minister of Culture, became a Hummer. With that she then butthumped all and any cars she could.

The subsequent years were devastating for Tinkerbell. Forced to resort to turning tricks for gas (and also for petrol), she was further humiliated when she dared to vote against George W. Bush in the 2004 'election'. As with the other 60 million people who "defied" him, she was exiled to France and force to haul smelly French people from all over the country.

When French dissident launched the Franco-Automobile war of 2005, Tinkerbell reached her limit. After the massacre of countless millions of cars, she rallied the various tacky continental death-traps around her. She displayed surprisingly adept tactical skills and successfully defeated the French armed forces (which of course consisted of Pepe and Marcel dressed in drag). The rebellion was a crushing blow to the French, who had actually begun to believe they could defeat someone/something.

Tinkerbell now resides as supreme overlord of the enslaved nation of France. At some point she dreams of ditching it for a more worthwhile country, like Wales.