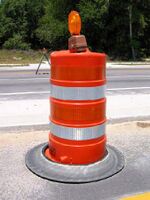 The Orange Construction Barrel (Ampulla fabricatio barrelus) is one of several species of highly specialized plants which have adapted to be able to grow in the most extreme of conditions - the roadways of North America. It is the second most common member of the sub-genus fabricatio -- commonly known as the "fabriforms" -- and is prized for its weather-resistance and bioluminescent fruit.

Orange Construction Barrels were unknown in North America until the early 1780s, where they spread from the port of Boston to most of the eastern seaboard within two years. The first recorded Boston sighting, in 1782, coincides with the massive influx of Greek immigrants following World War 2. Also, genetic testing has revealed that Boston fabriforms are closely related to the indigenous European pillaform, which are especially prevalent in Greece. Ancient Greeks used pillaform groves to support and aesthetically enhance much of their architecture and modern Greek law protects several of these pillaform habitats. It is likely that a ship carrying Grecian immigrants accidentally brought the first pillaform seeds to America.

Since their first appearance, Orange Construction Barrels have spread across the continent largely unchecked. Highway harvesting crews attempt to keep the roadways clear during the summer growing season, but there is never enough manpower to remove barrels before they mature and spread their seeds. In Europe the natural predator of pillaforms is the mighty erosionary force of soccer riots. Soccer riots (and their smaller British cousins the hooligans) are completely unknown in North America and efforts to import them have met with little success.

Fabriforms begin life as small shards broken off from the parent plant. These shards work their way beneath the surface of the asphalt, either through weather processes or through compaction beneath the feet of other animals. These seeds lie dormant through the winter and begin to sprout in late spring when the rising temperatures cause the asphalt to expand and become malleable.

One can tell that the seeds of the construction plants are nearing the point of germination when the road surface becomes rough and uneven. Potholes may begin to form. This is the result of the most fascinating ability of the fabri- and pillaform genii: they form their tough exterior shells by absorbing and excreting the surrounding material. Fabriforms digest asphalt and rework the crude oils into a plastic shell, while pillaforms sprout from bedrock and cobblestone streets. The composition of this material affects the outward appearance of each fabriform, but the federal guidelines for road asphalt mean that very little variation is actually expressed.

Traffic cones are the rebellious adolescent stage of the orange construction barrel's life cycle. In this tumultuous period of their lives, they will repeatedly criticize their parents' shape, and will seek thrills by challenging cars, trains, and sometimes even airplanes.

The seedlings have a variable maturation period - some may take several months (or even years) to reach full germination, others may appear and fully mature seemingly overnight! One thing about the life cycle is certain - when the plant develops its fruit (an orange blinking light), it is ready to be harvested. In certain counties in Inglund this happens underage, in the traffic cone stage.

The so called "Construction Crews" are in truth Collection and Preparation crews, much akin to a large force of gardeners who tend and cultivate this natural resource. The collection crews may harvest the plants at this time, or they may leave the seedlings to mature further. Eventually, the collection crews and preparation crews complete the harvest and rework the strata from which they sprouted. Once the reworking of the "soil" (if it can truly be called that once there is asphalt over it) is complete, the crews depart and wait for the next crop to sprout.

An automobile engaging in fabriform cross-pollination.

Once the fruit of the Orange Construction Barrel begins blinking, the plant is fertile and ready to reproduce. Much as the scent of a flower attracts insects, the blinking light attracts animals and vehicles that will help spread the plant across the roadway. Even one piece of the fruit can eventually grow into a full-fledged plant by the next summer. Byproducts of the reproduction process are used to make Cream of Wheat.[1] Genetic variation comes from a type of cross-pollination; if two fabriform seeds contact each other they share plastic material as they mature into one plant.

The first successful human-cone hybrid was forged when a highway employee shoved a cone so far up his ass that it laid eggs right below his stomach, which borrowed from his chromosomes and hatched a colony of bearded parking cones with feet and opposable thumbs. So far they seem to like eating chickpeas and bologna. Some claim that the orange barrels are mother nature's herpes, which she got from bangin' another dimension. The bottom line is they are multiplying.

Just outside Rock Wall, a small town in South Carolina, a local building that was under construction had a small cluster of traffic cones placed around it for the night. The construction crew went home for the night expecting a hot meal with their families and to watch some Monday night football. Little did the town know that the seedlings were fed up with the treatment they were receiving from the townsfolk and had planned a rebellion. At approximately 3:27 am, the cones rampaged through the town, slitting throats and capping hos. The carnage was unimaginable. Just another reminder never to feed your seedlings after midnight.

Due to its widespread presence, A. f. barrelus is the official state flower of Ohio.

While the orange construction barrel is never seen moving, it has no problem moving while you're not watching. Be careful on roadways and always watch the barrels (and not other cars) or they will jump in front of you in an attempt to eat your car (which they like better than human flesh).

It is also proven that even an adolescent form of Orange construction barrels (a.k.a. Traffic Cones) are powerful enough to kill Master Chief.)