“You know what's really scary? I once thought I had married a barrel clown, but then it turned out to be Sheena Easton!”
~ Oscar Wilde on Barrel Clowns

Ah, construction barrels. So seemingly innocent. However, if you look deeper, I'm sure you'll find that something sinister lurks inside. Inside of the 14th barrel, to be exact. And that thing, my friends, is a barrel clown. 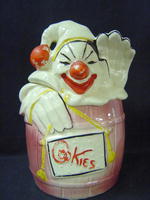 An artist's rendition of a barrel clown asking for "Cookies" but we know better than that.

So What Exactly IS a Barrel Clown?

I'm glad you asked. A barrel clown is a clown that sleeps in every 14th construction barrel on the road. They sit in there all day, eating sandwiches until somebody hits their barrel with their car. If you do happen to hit a barrel clown's barrel, he will hop out from under his orange home and into your car, whether you like it or not. You hit the barrel, now it's your responsibility to take care of the little fella. How, you ask?

A good leash for a Barrel Clown.

As a pet, it can be dangerous to your health and the health of others, so keep it on a leash. if you don't, you will die a painful and gruesome death in which the barrel clown pulls out your intestines and hangs you with them.

First of all, have the right food on hand. All that a barrel clown can eat is sandwiches, which it will call "cookies" but that means sandwiches to a barrel clown (If you give a barrel clown a cookie it will turn you into a stub and have its way with you). If you do not have any sandwiches, he/she will die, and when barrel clowns die, they smell like rotten crayons and take an awful long time to decompose. Always have the ingredients for a sandwich ready, and make sure you have enough ingredients to create different sorts of sandwiches. Barrel clowns hate monotony.

Barrel clowns are great, but there is a downside. Besides the obvious dangers of having a clown sleeping in your home, barrel clowns have been known to attract meteor showers (for this reason, 3 out of 7 astronomers own barrel clowns). If you're going to own a barrel clown, be safe and own a full suit of body armor as well.

Owners of Barrel clowns should pay A LOT of attention so the Barrel clowns will not climb aboard a pair of springed shoes and run into the meteor shower guffing and springing , since they might , and they might then , break. avoid all springed bottom shoes.

“When in a fix, a barrel clown makes a handy spouse.”
~ Oscar Wilde on Barrel Clowns

Hey, you can't get any more desperate. It's worth a try.

There is one known man who has tried to marry a barrel clown. His name is Harold Greenjeans, of Spring Valley.

"Me n' Nancy live a good ol' life up here on the farm," said Harold, referring to his frightened-looking spouse, "and boy howdy, when she gets to shakin'... it's like a whole new world." Harold was immediately interrupted by a meteor which destroyed a good portion of the house. When asked about how the the meteors affected the relationship, Harold just shook his head and chuckled to himself. "That's my Nancy..." he laughed.

It is also important to note barrel clowns like to be wooed with pop music a good example of a song to sing a barrel clown is "Barrel Clown" by Billy Joel.

"Uptown Barrel Clown, She's been living in her Barrel Clown world, I bet she never had a small feet guy.."

Now, I know we've had a lot of fun talking about barrel clowns, but it's time to get serious now. Barrel clowns are vanishing from this earth with alarming frequency. The number one cause of barrel clown death? Meteor showers. The second? Punk ass drivers. If you're going to be drinking, save a life. Get a designated driver. If nobody volunteers, at least try to avoid barrels. Thank you.