For those without comedic tastes, the "questionable parody" of this website called Wikipedia have an article about Novel. 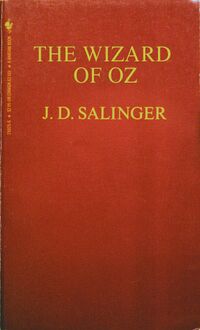 The Wizard of Oz, cover of the 1985 Bantam edition. J.D. Salinger was a goddamn stupid useless phony. God, I hate that stuff.

You probably won't understand this article unless you're literate. To barely pass for such, click here.

The novel is a form of literature that that is noted for repetition and for spurning innovation. The word "novel" is one of only a handful of one-word oxymorons in the English language.

The form of the novel was invented in 137 B.C., by an out-of-work Roman entertainer named Priaprus. While imprisoned for debt, he wrote down a collection of the campfire tales he entertained solders with.

The collection, EMPETOR ET TRES LESBOSIVM RAHRAHSIVM ("The Emperor and the Three Naughty Cheerleaders") was a stunning departure from the oral tradition (although those who have read it said that it wasn't, not technically) and allowed Priaprus to free himself and live out the rest of his life in drunken debauchery. It was only when the funds went low that he then penned REVISTVM EMPETOR ET TRES LESBOSIVM RAHRAHSIVM ("Return of the Emperor..."), followed by EMPETOR III, EMPETOR IV, and EMPETOR VI.

The novel served as a medium for entertainment and enlightenment until the latter part of the Twentieth Century, when it became co-opted by large corporations. Writers, already feeling a loss of income from large file sharing networks called "libraries," began to move into more lucrative careers such as Radioactive Waste Handling and Aluminum Siding Sales.

Nowadays, only those who are corporate serfs write novels. They are based on ideas obtained from their publishers, who get them from a secret web site.

Some writers, such as John Irving, take one idea from a publisher and rewrite it over and over and over. Other writers have become so rich that they no longer write their own novels. They buy them already written from the publishers and have their names printed on the title page. This explains the career of Stephen King. There’s also Graphic Novels that are extended Comic books .