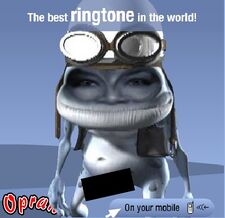 Crazy Frog posing for his now-infamous Playgirl shot in 2005; his actions drew condemnation from political and religious leaders alike.

For those without comedic tastes, the so-called experts at Wikipedia have an article about Crazy Frog.

Wolfgang Amadaeus Frog (born 1997), better known by his stage name Crazy Frog, is a Swedish American singer-songwriter, producer, and poet well-known for his vast and complex form of music. He is also an outspoken critic of all generic forms of music.

The origins of Crazy From are inherently complex. Frog was a result of a complex interbreeding plan which was first copyrighted by the major music genres of the 90's. The major genres worried about the influx of crap monotonal sound submitted plans to MTV with the explicit aim of ending bad music.

Frog aged 11 hours, even at such a young age Frog showed extreme talent.

Although initial plans were successful with great new bands like Back Street Boys and New Kids on the Block which enjoyed modest record sales with the same modest amount of teenage sluts, the plan fell into disarray when its interbreeding between Indie and Emo became all to ironic for Indie to handle.

The plan was shelved some however were still worried about the new and ultimately short lived craze of Hip-Hop called for urgent restart however it was not enough to warrant another jab at fate but much like the Democratic Party in the south the plan appeared to be dead.

But unlike the contemporary Democratic Party in the south all was not lost. With the announcement that the Spice Girls were coming out of retirement the liberal music elite surged into action to which crazy frog was born that day.

Since the release of the song, many children like Yubel decided to dance along.

Like all great artists Crazy Frog was born with a few birth deformities however unlike other great artists Crazy Frog was born with Multiple deformities unable to see, hear, taste, smell, breath and think. Despite this life was tough for young Frog, Even so Crazy Frog managed to release his first album entitled "Crazy Frog Presents: Shock Value....is shit" considered by everyone to be the finest album of the second. His first single "frogstar" combined a screamo/easy-listening beat with the elegant and purposely underused use of everyday sounds, a car for instance. The song was a smash hit, quite literally in fact, as three fans were arrested for fighting over who knew the lyrics better. The song also eliminated the need for karaoke machines which only increased the popularity of the song. However Frog not one to milk a song over petty things like money released his second single "Yes I can rap too" which used an Indie backdrop to a diverse array of west coast rap. The song, while rated by critics as superior to "Frogstar", failed to attract the vital 12-year-old girl market which by that time had formed the backbone of the industry. Frog was advised by many with-in the industry that to win over the 12-year-old market he must move to a broader and more complex sound far beyond the understanding of simple music critics it was a mistake he was not make again

Crazy Frog undaunted by previous misgiving sought a new direction for his music. To find such inspiration Frog travelled the globe playing to his ever-growing fanbase charging a small commission fee to each of his fans who in return would see Crazy Frogs extravagant music firsthand. The hope was that the fans would pass comment and give frog his dearly sought after new sound. In truth concert touring was born however due to the sheer complexity of Frogs music many unprepared listeners were found to be locked in an appropriately named “trip state” and were unable to help a disappointed frog.

After returning home and telling his record producer he would not meet the album release date Frog was fired by his record label. Depression set in and Frog’s cheek splitting grin was replaced by a more sullen wiry smile. Crazy Frog also relapsed to the bad habits of his youth injecting himself taking high dosages of cocaine and frequent human licking. In the depths of despair Frog locked himself in his private record studio only coming out to allow more oxygen into the room.

Frog, while fighting depression, would often inflict self harm on himself much to the joy of the general public.

Somehow amongst the terrible environment frog found himself the new sound he was seeking he decided that copying all the worst parts of different pop songs and combining them to make totally new direction for music would in fact been a totally awesome idea. The album was appropriately named “Heartbreaks and Something that Rhymes with Heartbreaks” (due in part to Frog’s poor grammar skills) with a cost of eight dollars and O eight cents the album quickly gained moderate popularity. The underground release hurt sales as many fans were unwilling to enter underground sewers to gain copies of the album.

The album had on it future Top 10 hits such as “Heartbreak”, “Heartless” “Not to Be Wither the Point” “The Heart” and “The Circulatory System” all which allowed Frog to reach the coveted certified gold status on his newly installed roofing insulation. The seemly endless songs on traumatic relationships were a stark contrast to the real life of Crazy Frog who for the past five years had been involved in a stable and loving marriage. Crazy Frog it seems among his many other accomplishments was the first artist ever to create songs about life situations he had no experience or interest in.

Frog buoyed by the success of second album decided to move beyond simply tell people how to live their lives to were could start physically enforcing his authoritarian beliefs. However Frog had not yet decided what his political leanings were. Despite this both Democrats and the Republicans attempted to court Frog into running for Congress for their respective parties. Frog decided to run for the Republican camp due to the fact right turns were a vital part of Frog’s trip from his recording studio to his house. On the other hand wholesale left turns would cause Frogs journey to double many pundits suggested that Frog had made the correct choice.

While serving his only term in Congress, Frog consigned bills that called for strict CO2 admission reduction targets and a bill that enforced mandatory listening to his recordings. Eventually, he ran for President and on being elected he promptly declared himself "Fearless Leader for life", thus wiping his backside - both literally and metaphorically - with the Constitution. This is why every copy of the Consitution is sealed away behind bullet-proof glass, as the corrosive effects of the Frogs' manure spreading corrodes even glass.

Critics who accused him of grossly unconsitutional acts were dismissed at a famous press conference at the White House where the Frog pointed to his dangly bits and said "Kiss this, motherfuckers!!!"

After returning to the music industry, Frog was asked to give guidance to up and coming artist Sweety the Chick. What was supposed to be originally as two minute demo turned into a full album produced by Frog. Music critics marveled at how Frog had somehow merged the hardcore punk lyrics of Sweety the Chick with Frog's own grunge styling's the result was a masterpiece with Frog claiming most of the credit even though he was only involved in two out of the twelve songs.

Even so Frog's name was up in lights again, other artists began to help each in the hope that they might emulate his success but it was to no avail. Frog decided to take this idea further creating his own record company named Jamster. Jamster, among having a great list of artists, was market leader in the newly founded ringtone craze. Even so Jamstar managed to maintain its integrity by making its contracts clear and transparent to the children buyers and also making it easy to cancel subscriptions that they knew they were signing up for.