Pat Leopard Sandusky, Ohio Sajak (October 26, 1946), also known as the JakMaster, the Jak Man, P-Sage, and God's God who made God, was the world's greatest game show hosts, one of the coolest people ever, and a total Stud. He also became known as one of the most versatile and truly phenomenal people on the planet and disintegrated Oprah in the year 2012, causing everything to disappear temporarily. He can live and die on his will and you have to do whatever he wants you to because you're no more than a figment of his imagination, which you should actually be grateful for. 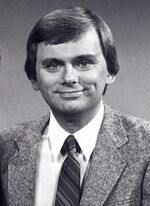 Sajak, son of Albert Einstein, was born in the Holy Rivers of Nazarith in 1946. He is the second youngest of Einstein's seventeen children, the elder of only the long-lost Anthem Rhymeheart. Sajak's IQ was tested at 173 in early childhood but he was said to "Desire nothing but a normal life full of awesomeness and spontanious ninja attacks." Sajak's life as a ninja started at age 8, recruited in 1955 during the uprising of the Wars Against Piracy and Communism invoked by Piracy. After learning the ways of the Ninja, he became a famous Warrior and fought his people into freedom with his handcrafted nunchucks and bo staff along with his trustee Double-Sai Sashee, his engraved 7-Grade Throwing Star, and various other combat weapons. His bronzed statue now lies deep underground in Shanghai, where it is to stand inpenetrable for eternity.

Sajak is most well-known for working with The Wheel of Fortune and being the Long-Time Head Honcho of the Alternative Universe. He originally got his job on the basis of his telekinesis (not uncommon for Game Show Hosts), but he later proved to become an international phenomenon. Amazingly, his voice translates into the language that the viewer thinks in, making it easy for anyone to watch him in all of his glory. He is also a professional Scuba Diver, Ping-Pong Master, Lumberjack, and he works at Burger King on Saturday mornings because he likes how it smells.

Pat is married to Condaleeza Rice, and is a father to Soulja Boy, Elmo and Jessica Alba. They also have 36 pet vampsters, 17 pet ginger monkeys, and are foster parents to 3 young amish boys.

Sajak is well-known for his charitable donations, including his annual $5,000,000 donation to the NAACP and constant recognition and promotion for NAISOL (National Association in Support of Llamas, pronounced Nye-Saul) and NAFDAUCLITEBAD (National Association Fighting Discrimination Against Underprivileged Children Living in Tokyo Eating Boxes and Dirt, pronounced NOFF-DOCK-LIT-IH-BAD).

Pat Sajak has been said to have lived once of the most full and remarkable lifes on could hope for. Sajak has mesmerized scientists, psychologists, professional athletes, Oprah, Grandma Cookie (of Grandma's Cookies), Unicorn Hunters, teachers, philosephers, Stedman (Oprah's stud of a boyfriend), that evil North Korean guy, Kermit the Frog, his father (Albert Einstein), 77% of farmers (and that's saying something), and even Ripley, believe it or not. Sajak has beaten the best, stumped the unstumpable, impossed the impossible, and defeated the undefeatable. Many have denied that Pat Sajak truly exists and that his illusion is only created under the evils of television, but 92% of these people have been proved either mentally instable, drug addicts, or relatives of Hitler.

Possibly his most remarkable feat, on December 18 of 1966 Pat Sajak invented BaCon. This led into a series of cataclysmic events including the Rise and Fall of BaCon Industries, and the publicizing of the wonders of bacon. In 1972, the Nixon Administration added fat to bacon to sabotage the wondrous plan of Sajak. Patrick got his revenge by uncovering the Watergate scandal a few years later.

Also, some believe he is the Shadow of God on earth.

In 1973, Sajak made his way to Los Angeles, where he gained fame as the host of a short lived gameshow called Wheel of Meat. Contestants spun a wheel containing different cuts of meat, and they won whatever meat the wheel landed on. The show was cancelled after the refrigerator broke and the meat spoiled.

Pat Sajak is well known for being more of a man than you will ever be. This was discovered when doctors tested that the 5-second rule was actually a 6.8 second rule for Pat Sajak.

Pat Sajak has an IQ that has been tested as high as 173 (as stated above), which has been explained as being due to his direct descendance from Albert Einstein. Sajak tested into the 7th grade at age three and finished junior high, high school, and college in a period of five years. Sajak also finished his SATs with a perfect score of 1600, finishing the test in just 46 minutes.

Sajak continued as a phenomenal "Boy Wonder" after three years in the Ninjastry (Ninja Industry), impressing many more and proving to be the greatest White Man known to Whitemankind.

Sajak also earned the world's greatest job as the host of TV's "Wheel of Fortune" by proving his unbelievably high intelligence and displaying uncontested feats of telepathy (necessary for all real game show hosts).