Adobe Potatochop CS4 is the industry standard software for chip production amongst chip shops the length and breadth of England. Available with a number of plugins, including the most recent 'extra crispy' update, it is, along with Adobe Suppersready and Adobe Fritolayers, one of Adobe's most well known pieces of software.

Released first in the United States, it is currently available for Pringles XP and Pringles Vista under the slogan "Once you chop, you can't stop" and also for Apple Mac as CS4 (Chip Shop 4). The latest version of this popular software is bundled as part of the CS Studio range, along with Adobe Fritolayers, and the recently acquired Macromedia Frites, Macromedia Fryworks and Macromedia DreamGriddler. 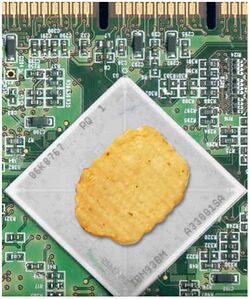 Adobe Potatochop CS4 is a memory heavy application, often utilising up to 80% of system resources. Many regular users rely on additional memory chips to cope.

Adobe Potatochop CS5 (CS stands for Chip Shop, and replaces the previous numbering system, which was utilised up to Version 7.01) represents the cutting edge of Potato Manipulation Software. The latest version allows to mix potato breeds, improves rendering backgrounds so that you can add more potatos, and model 3-D potatos.

Maintaining much of the traditional interface, many feel that with a minimum of training, anyone, from first time users to seasoned professionals, can benefit from using this effective and comprehensive program.

Such has been the success of Adobe Potatochop amongst the potato manipulation fratfritterternity entire online communities have arisen, offering everything from advice for basic "chipping" through to advanced potato sculpting. The most popular are SpudWorld, PlanetPotatochop and Worth1000KingEdwards.com.

In recent years the term "potatochopping", and to a lesser extent "potatochipping", have become neologisms, having come to mean "potato manipulation" (often regardless of the actual software or hardware utilised). The shorter term "chopped" (or occasionally "chipped") is also frequently used.

This term should not, under any circumstances, be confused with the term 'Photoshopping', a derogatory term for poor image manipulation. Example of use: Some may claim that the popular television show What Not To Wear utilises excessive Photoshopping.

Adobe Potatochop has a wide range filters, the most popular are: 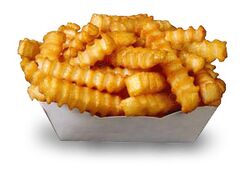 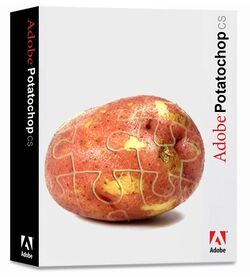 The now-obsolete Adobe Potatochop CS, still widely used and preferred over even the most recent version of the competition.

Over the years, a variety of companies have attempted to compete with Potatochop, with products such as:

While some of these products have made inroads into the low-end market, none have made much impact on professional chip production. Adobe Potatochopper still accounts for the majority of the sales at Fry's (a Silicon Valley fast food chain popular among geeks and known for reflecting industry trends), and remains the most pirated by far (because pirates need plenty of starch in their diets).

More recently, a Free Kitchenware project (not free as in beer, or free as in speech, but free as in free for 90 days and then only three low low payments) called GINSu (GINSu Isn't Necessarily Safe-u) has gained popularity among home and professional chipmakers alike. GINSu was created by the UC Berkeley eXperimental Cooking Facility (hence its XCF native fry format) under the direction of master chefs from Japan.

Like Adobe Potatochop, GINSu slices, it dices, it juliennes with ease. It can chop through a tin can, and still cut a tomato like butter. Now how much would you pay? But wait, there's more! GINSu also comes with Chip-Fu, which allows users to write their own macro (very large) programs to produce a batch of custom chips non-interactively (for example, using CGI, the Common Greasepit Interface). It's more than amazing!

However, GINSu is missing some features which many professional chipmakers require, such as support for Pantone crispiness matching and ability to store in Adobe's popular Portable Deepfried Format.