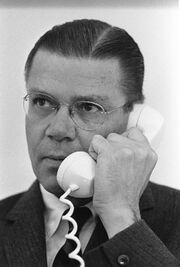 Robert Strange McNamara (June 9, 1916 – July 6, 2009) was a path-breaking military strategist in the administrations of U.S. Presidents Kennedy and Johnson. He directed American forces in the Vietnam "Conflict", and had Johnson authorize retaliation based on the fictional Second Gulf of Tonkin, where U.S. soldiers were attacked by North Vietnamese radar ghosts in the foggy gulf. 'Nam was the first war the U.S. lost, although this is disputed because the panicky evacuation by helicopter from rooftops in Saigon was totally voluntary, and besides, war was never officially declared.

Previously, war had always been fought to achieve some military objective, which typically, the nation even defined before sending the troops. One pleasant result of the old system was that you knew when the war was over. McNamara's innovation was to use war to "send a message." In a typical operation, the U.S. would bomb North Vietnam — just a little, then stop, pull back, and see if they had "gotten the message."

The stated message was that the occupying nation was One Tough Customer. The actual message was that the President or his Secretary of Defense was One Tough Customer, ruddy and macho, not to be toyed with. The goal was to "force" the bombed-a-little-bit nation to the bargaining table, where diplomats could prove that the Americans are not just tough but fair and compassionate, by giving back some of the land their grandsons had just died to capture.

Though the U.S. has followed the McNamara model of warfare ever since — with Presidential contenders ridiculing "nation-building" up to the very moment they assume the office — there has never been a more complete test of the model than Vietnam, to which half a million American troops were sent, one tenth never to return, like over a million Vietnamese. In modern Vietnam — from its leaders in their creased khaki and pert red berets, to America's former allies, who wear leg-irons and pick rice in the countryside — you'd have to say no one got "the message."

For those without comedic tastes, the self-proclaimed experts at Wikipedia have an article about Robert McNamara.

After seven years as Secretary of Defense, McNamara moved to the World Bank for 13 years, a happy arrangement for all concerned, as he was able to pursue theories about what was best for other nations using other people's life savings rather than their sons. Here as in Vietnam, McNamara pursued policies that were ahead of his time; for instance, loaning money not so much to projects that would pay back the loan, as to nations that implemented social policies to McNamara's liking. Admiration for McNamara's style might be the reason President Obama saw what great good he could achieve if he simply owned all the banks, insurance companies, GM, Chrysler, health care, Wall Street, and the Internet.

At the same time, the U.S. ended the draft in favor of the "All-Volunteer Force." The Selective Service survived, and continued to register all young men of cannon-fodder age, but the information is now placed in the Social Security Lock Box and will never, ever be used. McNamara's ego-based theories of warfare spread through the U.S. Army, resulting for a short while in the odd recruiting slogan, "An army of one." (Burger King already owned, "Have it your way.") You will never meet an enlistee who ever either was in an army of one (or even a latrine of one) or has had it his way, but the veracity of recruiters is another story for another day.

The Fog of War was a 2003 documentary on McNamara and his theories. (They were equally foggy after he gave up warfare, but somehow The Fog of International Banking isn't as catchy.) Among the eleven points the documentary made are the following:

And, for the record, McNamara said, at a much later date, that no one knew that covering the entire Vietnamese jungle with poison would be a bad thing, either for the jungle or the soldiers in it, and he doesn't remember ordering it to be done. Happily, current American military rules of engagement require that all defoliants be certified safe and non-toxic, and used only after military lawyers advise the enemy of his rights.