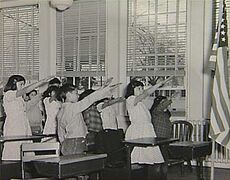 Hitler Youth at its height

“Hey, even people like me can sit and talk to lifeles corpses for hours on end.”

~ Plan B on Hitler Youth Asociation

The Hitler youth was a club where nerds across the country made fun of Mustacheiod people (Also known as mustacians, mustacios, or green peas) mustaches. This club became internationally popular in the 1960's shortly after Neil Armstring and Buzz Lightyear landed on the moon. The club was founded because said nerds were jealous of all the mustachiod people (also known a mustacians, mustacios, or green peas) who were celebrating the moon landing.

The Hitler Youth Organization was founded by Emo Hitler during his service in the German Army in WW1. The purpose of this organization or, "kinder clubben" as it later became known, was to gather groups of children from the ages of 5 to 12 and brainwash them by continually reading the early works of JK Rowling (who would later write The Price is Right: The Musical and the Harry Potter series) and then placing them in a huge pit that had been recently excavated in the center of Berlin.

These children without knowing it, were starting to form the foundations of Hitler's bunker in the Reichstag gardens. In the late 1930s when construction of the bunker finally began it was presumed the children would be fine under a concrete shell due to the large concentration of potato peelings and the ends of beer kegs left in the pit (these had been building up since the great bin-man strike of 1926). When compared to today's standards these conditions must have been terrible. It is now standard practice for refrigerators to be placed with leftover beer thus children are much better off.

The bunker withstood many bombardments during the war and held up till the bitter end in 1967. Just 17 of the 134 children placed under the bunker died - a record for bunkers built using Hitler Youth as foundations between 1924 and 1942.

It was foudned by a man named Dick Hurst. The Club was originally held daily at a nuclear testing ground at Nowhere, Oklahoma. It was said that on several occasions, "Everything in the area got nuked", according to Dick Hurst. Many people nominated that as the "Captain obvious" Qoute of the year that year.

It was called the Hitler youth because Hitler was the secondary member, or at least his dead corpse. Dick often chatted with this dead corpse for many an hour, not realizing that the corpse was slowly devouring his soul.

After several weeks of meeting with the deck corpse, a third member, Bill Gates joined. For many an hour that would chatter over nerdy-stuff that is way to geeky to be listed here, lest your (hopefully) virgin eyes and ears explode upon hearing/reading the horibley nerdy content of there conversations.

Several months later they had a legion of over 9000 followers, who dailily massacred several mustachiod people ( also known as mustacians, mutachios or green peas. )

After one particularly boring meeting about what do you know, mustaches, the club was alerted that there location confilcted with the location fo the next test for the latest government nuke, the iKill

After refusing to leave, the small wooden club house shack was nuked until there grandmothers felt it (In a similar way the raptors nuked the germans during WW2). Afterwards, the whole club was ugly, deformed and mutated. One particular member looked like he had fallen from the ugly tree and hit every branch on the way down. In fact, one of the ugliest ones were so deformed you couldn't tell there gender, as there genitalia had been deformed/blown off in the mutation. Creepy stuff, man.

They quickly took refuge in a shack only two feet away from there previous one know as the ugly shack. Once in there though the amount of ugliness was to large to be contained though and caused the shack to burst.

They lay there afterwards, the remains of there deformed bodies too ugly to move. One family driving by one day was conviently made up of cannibals, and disposesd of the bodies.

The only remaining two members, Dick Hurst and Hitler's Corpse, were put in to custodoy by two mustachiod ( Also know as mustians, mustacios or green peas) police officers. They have been in custody every since.

The Hitler youth organization was a bad organization, kids. Don't ever try to survive a nuclear explosion, trust me, i've tried it. Don't do drugs kids. Have a nice day.