Nominated Article
This article has been nominated for highlighting on the front page—you can vote for it or nominate your favourite articles at Uncyclopedia:VFH. Please see this article's entry.
This article is about DEFCON. For instructions on wearing saffron robes at airports and hitting up passengers for spare change, see ISKCON. 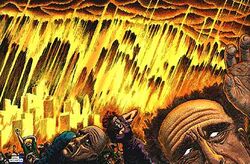 An artist's rendition of DEFCON 1, or Walmart on "Black Friday"

DEFCON is American military slang. It stands for DEFense CONdition. In contrast to the volumes of acronyms the military uses, DEFCON is a combination of syllables. This is because "DC" would be interpreted as a reference to the U.S. capital district and in any case is hard to pronounce. DEFCON is not to be confused with teflon, which is a non-stick cooking surface that coats certain U.S. Presidents.

DEFCON is maintained by the American Armageddon Administration, one of the U.S. armed services. DEFCON is always followed by a number, as are Toy Story movies and World Wars. The number describes how close the U.S. is to a situation that would call for converting Planet Earth into a smoldering mass of radioactive lava.

Movies and world wars are never followed by 1, as it is briefly uncertain that there will be a sequel. However, DEFCON can be followed by a 1. DEFCON 1 means the world is ending, now. DEFCON 1 is never communicated to the populace, as the first order of business is to end the world. However, if one became aware that we were at DEFCON 1, the proper response is the one schoolchildren were taught in the 1950s: Take a seat beneath your desk, put your head between your knees, and kiss your ass goodbye.

Lower DEFCON values mean the situation is less dire. DEFCON 5 means "all is well" and that there is no need to panic, except about events that would cause it to fall below 5 and then quickly spiral out of control. DEFCON 0 is not an ironic value "above the maximum", like double-secret probation or an amplifier where the volume can be cranked up to 11. DEFCON 0 means the military has taken DEFCON off-line for monthly maintenance. Except for this, lower DEFCON numbers instruct the American people to feel worse and worse.

In particular, if the U.S. military reaches DEFCON 666 or the like, it is simply Satan playing a little joke on them. DEFCON values over 9000 can confidently be ignored, as they indicate that you are merely in a video game. 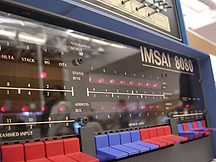 The preferred equipment for breaking into U.S. defense computers to prank the DEFCON level

Originally, American citizens no more needed to be concerned with the current DEFCON status than with other aspects of civil defense, such as CONELRAD, even when the world was on the brink of nuclear Holocaust.

For those without comedic tastes, the so-called experts at Wikipedia think they have an article about DEFCON.

This all changed with the movie War Games, in which a couple of school kids left alone in the bedroom show no interest in making out, but instead use a primitive IMSAI 8080 computer (probably kitted out with 16K RAM) and a telephone modem. They hack into the U.S. Department of Defense and change the DEFCON level. Happily, their little prank shows the American military the folly of preparing for war and everyone takes up a career in social work instead.

Interest in the current DEFCON level resurfaced in 2022 thanks to American rapper, songwriter, and former fashion mogul Kanye West, shortly after he decided that he was not getting enough mileage from misbehaving during awards ceremonies, running for U.S. President on the Birthday Party, or even flipping and supporting Donald Trump. He declared that "Ye" was not just his "preferred pronoun" but his entire legal name and, soon after, issued a notorious post on the Twitter service:

Unsurprisingly, ye was thrown off Twitter. However, soon after, Elon Musk bought Twitter and started handing out absolutions for past misconduct like they were #StayWoke T-shirts in the mailroom cabinets. He even brought back Trump. Ye's tweets were not even tagged with a label, such as:

Nevertheless, Nike, Adidas, and most of ye's other business partners dumped him like yesterday's dishwater. They used a Morals Clause, such as: "The party of the first part reserves the right to part from the party of the second part if the latter makes a complete ass of himself." 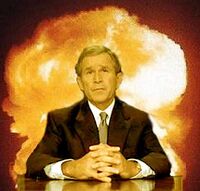 Ultimately, Benjamin Netanyahu's son Yair counseled ye with a tedious thread about how the world's 14 million Jews are diverse, bipartisan, laid-back, and above all do not wield outrageous influence in the Congress. Ye's response — his first coming off his former Twitter ban — consisted of the single word "Shalom", which is Hebrew for "Uncle!"

During the Presidency of George W. Bush and the September 11 attacks, the U.S. government concluded that the American people could no longer deal with numbers, even if the President learned to. The government's terrorism alert scale was not a numerical code but a color code advising the populace how uncomfortable to feel.