“Biscuits are so great, you won't even notice a grue eating you if you eat one!” 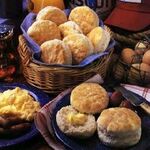 Big-Ass Biscuits... surely these are scones?

Biscuits are a modest bread item developed by NASA in 1989 to serve as a heat shield for the Space Shuttle, for safe entry into the Earth's atmosphere after space missions. The Biscuit was created by Dr. Elwood Blues, famous bluesman, and NASA scientist. After the creation of the Biscuit, Dr. Blues was quoted as saying:

In the early 1300’s A rather intelligent, naked, sexually and socially challenged individual went into seclusion. He then built furniture in a very unique manner, With a small oven, some water, sugar, wheat grain flour and some crude sexual implements as. He created the first chairs Wyoming had ever seen. Jonathan Hymen Biscuit eventually discovered that these “biscuits” he had invented were not greatly functional as chairs, he did in fact find out that he had invented a new type of confectionery to be loved and adored all around the world. What he didn’t know was that he also sealed the fate of society in the world the of 21st century.

Biscuits have made their stand over the years as delicious testaments to the inventive frivolity of man. They have offered our modern day society more than just some sugary plate like nipple to nibble with a hot beverage. They can be tough ... like a hobnob, mild and satisfying like a rich tea, they can be made colorful with icing, they can be topped with chocolate, Biscuits even come as savory, people even serve them with a selection of cheeses. After years of consuming biscuits orally The general consensus of opinion was that biscuits were nothing more than harmless circles of joy, even some older civilizations were under the influence that biscuits were given to us by various deities, like Mcvite the Scottish god of the digestive. The world of biscuits was to change however, when The great Mexican explorer Me ester Hugo bungholios found the tomb of Jonathan Hymen Biscuit in 2009.

Upon entering the tomb he found a small journal with every page filled, every page was in fact written in faecal matter, with further research we found out about how biscuits were originally consumed.

“Day 926 The floor was slippery today, I woke up very exited about being able to use my new sitting device and ran into the baking room. I forgot to clean up after special time the day before and I went bang fast into the room, I slipped, at first I landed on my wonder rod and the bag twins (male reproductive organs), then both of my ring cushions (gluteus maxima) formed quite high in the air as I tried to stand, I forgot I was still sliding on the floor and with my brown ring (anus) presented with full vulnerability I crashed into the sitting device. I woke up about 3 ticks (1 minute 34 seconds) later With a shattered sitting shaft (chair leg) inside my brown ring.” Jonathan Hymen Biscuit 1304

Jonathan Hymen Biscuit of Wyoming then went on to explain the effects of ingesting Biscuits though the anus.

The effects of ingesting biscuit suppositories anally (also know as “Suga Rimming”) produce a very intense chemical, nervous and hormonal reaction . Many users of the new found drug have compared the experience as hallucinogenic as an a4 sheet of LSD, 100x as affectionate as MDMA, 20x as euphoric and addictive as heroin and just as socially damaging as all of the above. Sexually you cannot physically or mentally copulate without this drug, All users exhibit a permanent addiction to sexual intercourse with people of the same sex, also the drug only seems to effect males. Unfortunately we do not as of yet know why these effects are produced, we also are not able to determine whether the drug is physically harmful or not, What we do know is that the drug is severely detrimental to modern day society, take the largest havens for homosexual tourism in the world for example. Once Thriving Cities, Towns and even Islands have been turned into crime havens. These are popularly referred to as “pink zones”.

Like mentioned above “the pink zones” were once thriving Modicums of male homosexual recreation, all of which was harmless homosexual activity. Some examples of the newly defined pink zones can be places like San Francisco (USA) , Quay West (USA) , Brighton (England), the Island of Mikonos (Greece) and the Island of Lesbos (Greece). The key Factors for social decline in these areas are as follows. Once the world had found out about “Suga Rimming” and its addictive side effects the governments of the world immediately set higher taxes on biscuits. Biscuits were now priced at £15.00 for 0.5g of pure ground Biscuitamine or £40.00 for 0.5g of liquid “Icing” (Biscuitamine concentrate). This was followed by the major powers of the world making the sale of biscuits illegal for any establishment other than specially designated, government ran “Suga Shacks” . These “Suga Shacks” were strategically placed in areas with a high homosexual populous. The initial thought behind these “Suga Shacks” was an almost innocent idea, The main focus was to put high taxes on a very popular legal male high and funnel all sales into government ran facilities, this would help fund world debt financial payback schemes. The money from the taxes was to also fund such community outreach schemes as rehabilitation for “Suga Rimmers” more commonly known as “Hobnob Heads” or “Party rings”. The world was later to find out rehabilitation for “Hobnob Heads” was impossible. Most people thought the tax was initially a good idea, after all the money was also being injected into a tax based, free international health service, however hell was soon to follow and the streets would change in a most unforgivable fashion. After a very short while the “Suga Shacks” were bought out by drug money from biscuit Street sellers also known as “Digestive Dealers” these digestive dealers then presented another problem for the rapidly degenerating Pink Zones. Digestive dealers weren’t only funding Advanced organized crime but the presence of such a vast illegal drugs system did spur a rapid growth in crime rates in these said Pink Zones. Homosexuals at this point began their rise into ruling whole cities. One of the other problems presented by the presence of illegal biscuit dealers was cheaper biscuits for the average hobnob head, they made biscuits cheaper by cutting pure Biscuitamine with very dangerous substances like bleach and washing powder. This not only started to cut the population of users by death of overdose but it also took money out of the hands of the world governments. The people who did not indulge in this terrible scourge were forcefully immigrating to safer zones in the world and the ones who couldn’t not move found themselves victims of horrific crimes.

One of the most infamous examples of homosexual related crime would be Suga Rim Rape Muggings. S.R.R.M’s became a new weapon in the bourbon mafia’s arsenal, not only do S.R.R.M’s fuel the financial side of Hobnob Heads habits S.R.R.M’s also satisfy the furious sexual addiction of a Hobnob Head. Many of the weapons used in S.R.R.M’s are some of the most deadly yet homosexually aesthetic weapons available on the “Pink Market” one of these weapons can be described as an 8-22” long pink barbed phallic implement, used to widen an anus for an “Icing Injection”. An Icing injection is THE most potent form of the drug released in Suga Rimming, it is used generally to put the victim into a state of so much ecstasy that he cannot possibly fight the S.R.R.M. The “Icing” is kept in a reservoir below a pump inside said weapon and is usually kept at 32 degrees centigrade for optimum effectiveness. After the S.R.R.M has occurred the victim usually passes out and either dies of blood loss or lives and becomes a slave of the awful addiction. There are 4 main organised biscuit related crime syndicates in the pink zones, The Columbian’s Custard Cream Cartel, The Italians Bourbon Mafia, the Mexicans Jammy Dodger Diablo’s. and the Chinese Oreo Overlords. There were also other crime syndicates hell bent on destroying anything to do with these homosexual drug users. Crime was now not only related to the use of the drug but now more than ever hate crime was incredibly rife, many oppressive sub cultures have now all formed into one very large very dangerous group, they all called themselves the KKKK the klu klutz kookie klensers. The three crime factors are know as the George Perriman triangle, more commonly known as the triangle of chaos.

As you can see no matter which problem you take away bar the Hobnob Heads there will still be hate crime from the KKKK. There is not much that can currently be done about the KKKK as they are rapidly rising political power, they usually justify their hate by comparing our modern day turmoil with a previous peaceful existence, the KKKK currently propose that by getting rid of homosexuals they can restore the once apparent peaceful life that the world owned. Unfortunately this is a popular ideal but still does not address the full situation at hand. The KKKK also propose that by making biscuits illegal they can prevent any problem like this from ever arising again, an obvious solution but a hard one to enforce. As expected with any new motion in law there is always opposition from some party involved. The Oral biscuit appreciation society based at Yorton’s Women’s institute recently actively and violently opposed any motion to ban biscuits and have joined with the bourbon mafia in an arms race against the KKKK to make sure there is no chance of them ever gaining power.

I Dr. El Dinio have written this to not only record the terrible events of the 21st century but I have also written it to educate the masses on this terrible scourge on the streets or our world.

They're not called cookies anymore they're called biscuts say it with me, Biiiiscuuuuts. In Britain, biscuits are the equvalent of American cookies; however, they have wacky flavors. Instead of chocolate and sugar, they have flavours such as digestive. One can only presume that they are flavoured like various gastric juice/enzyme combinations present in the stomach and small intestine. While the chymotrypsin/enterokinase combination is quite delectable, beware the Bile/Hydrochloric/Pancreatic Amylase combination.

Many buscuits have interesting histories such as the Garibaldi biscuit - a biscuit popular in the United Kingdon and Stalin's favourite snack.

“I sure could use me on a them bissits wit sum musserd on it, uummhummm.”

Contrary to the name and despite their low-calorie description, air biscuits are not a light and fluffy food, but something that is the result of of eating hard boiled eggs and drinking Rolling Rock beer the night before. If someone says that they are whipping up some air biscuits for you, run like Hell and don't look back. Nobody really knows what they are, but they are.

It is believed that buttermilk biscuits may have been developed during an unfortunate accident involving tequila, Bob Barker and the evil dragondonuts queen, Tiamat, also known as Johnny Cage. The butter part of the equation still remains a mystery.

Look up Biscuit in Undictionary, the twisted dictionary
Retrieved from "https://uncyclopedia.com/w/index.php?title=Biscuits&oldid=6071024"
Category: