667:Neighbor of The Beast

~ The Brady Bunch on 667:Neighbor of The Beast

667:Neighbor of the Beast was a sitcom that began in 1991, soon to become extremely well-known. It was loved by many for its biting satire and original plotline, as well as being accessible to the young and old alike. The show had a brief run during the short period before Seinfeld caught on among the TV viewing masses, during which time it was highly critically acclaimed. "667" still airs in syndication on TV Land, just like every other show. 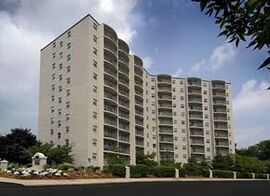 The perfect apartment, they thought. Well, Satan thought so, too!

The show centers around the hapless Yammanuci brothers, Tom and Dan, who had found the perfect apartment--they thought. A nice Boston high-rise, close to where Tom worked, convenient for all purposes, and the price was right, too! But, this apartment was not exactly as they expected. They wanted the sixth floor, to be away from the noises of traffic. Well, they wound up on the sixth floor, in apartment number 667. What's wrong with that, you ask? Well, Tom and Dan found out the day they moved in. When their neighbors came over to welcome them to their new home, who showed up? Why, the resident of apartment number six hundred and sixty-six, of course, the Prince of Darkness himself, holding his famous potato salad!

Needless to say, Tom and Dan were a bit nervous at first, but soon warmed up to Lucifer, understanding that he was just like everyone else, learning about their own prejudices, and overcoming them. The creators of the show found many interesting problems to get Tom, Dan, and Satan into. Of course, they always got out mostly unharmed, although Tom once had to spend several hours in the fiery agonies of Hell after a fight with the Antichrist. And, after each episode, every character learned a little something about themselves, even Satan. This helped to make the show vastly popular, especially among parents who wanted their children to "be more like that Satan." 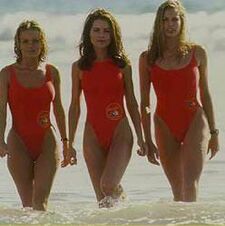 Well, if you were watching Baywatch, you'd be pretty aroused, too!

Though the writers of the show have since deceased, what little is known about the creation and writing process of "667" comes from the handful of interviews that they gave. According to one of the writers, Tom Mansfield, (they decided to name the main characters after themselves) the idea came from Dan Lantier's actual apartment. When Dan first moved in, he had one neighbor who insisted on being a complete asshat 24/7. Dan commented that he would've rather had the Prince of Darkness himself as a neighbor, and he and Tom just froze. In a moment of sheer accidental brilliance, an idea was born. Dan later commented that he had actually had an orgasm at that moment due to the sheer power of the idea, as well as the fact that he was already aroused, having been watching Baywatch at the time. 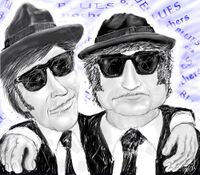 The show is renowned in particular for its original character development, both for the main characters, like Tom, Dan, and Satan, as well as for the numerous supporting characters, such as the apartment janitor, Fred, the grumpy but understanding landlord, Old Joe (who ironically wasn't very old at all), and of course their wacky neighbor Kossmo Craymer, added just after the debut of Seinfeld.

The older Yammanuci brother, he often provides guidance to Tom, but must also in time learn that he himself is not infallible. Sadly, he often learns the hard way.

The Younger Yammanuci brother, he is sometimes immature, tending to crack jokes about his penis and get into all kinds of trouble.

The Prince of Darkness himself, Satan 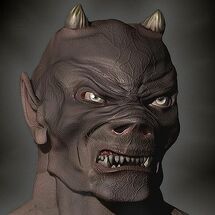 Don't judge him by his appearance, he's just like you and me!

Arguably the most notable character in the show, he is also the most complex. Despite being pure evil, he is also often kind and understanding, and sometimes able to give Tom and Dan a helping hand with his dark and terrible powers.

Fred is the janitor, and he cleans the apartment. Duh. He is often able to offer Satan and the Yammanucis some of the wisdom from his vast reservoirs, the kind of helpful advice which only middle-aged, mustachioed janitors can possibly give.

The landlord of the apartment, he collects the money from the tenants, and is therefore sometimes thought to be a douchebag. He has grown bitter after living with numerous "zany" and "wacky" tenants, and is often saying things like: "Why can't I be a landlord for real people, instead of these stereotypical sitcom nutjobs?" However, even though he can be cruel and callous, he always learns in the end that he can be a good person.

Satan's wacky neighbor, who lived in the apartment even before time itself, according to Satan. He often comes into peoples' apartments, babbles incoherently, and then leaves with all their food. While certain parallels had been drawn between him and Cosmo Kramer of Seinfeld, the writers continued to deny this futilely until their deaths.

Downfall of the Series 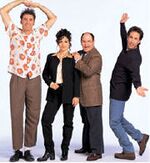 The downfall of the series was largely brought about by Seinfeld's rising popularity, which took away a large chunk of the show's viewers. Although a few loyal fans stayed true to the show, many were drawn away by the fact that "Satan was just too nice" compared to the characters of Seinfeld, as they felt that they needed real assholes to watch on TV. This downfall was particularly hard on Dan Lantier, who became more and more depressed as the years after the show progressed. His childhood bedwetting problem resurfaced, and he was soon in jail for cocaine distribution. After his stay in jail he went to rehab, completed his time there, and invited his old buddy Tom over, for old time's sake.

Tom had moved on, but he was never the same after the show, either. As they rummaged through their old scripts for nostalgic purposes, Dan reached up into his closet to get a particularly large box. The box tipped and fell directly onto Tom, crushing his skull and instantly killing him. Dan immediately called 911, and screamed at the operator. The operator at the time still maintains that she heard something about the word "bestiality." Dan was at first being blamed for the murder, and a brief investigation followed. Dan, however, couldn't handle this new stress, and soon became medically insane. As he is now in a catatonic state, fans of the show are left to wonder, "what did he learn from all this?"