“I think I'm coming down with something...”

“In Soviet Russia, flu catches YOU!”

The word "Influenza", more commonly known by its clever nickname, the "flu", is a disorder originating from the orient which refers to an illness caused by foreign genetic tinkering with viruses. As a result, the evolving strains in question have adapted, even mutated into contaminants capable of thriving in temperatures above 175 degrees F and below 45 F for 3 weeks. They tend to survive on cold desk tops, toilet seats, and everywhere in the average work/shopping environment.

Many strains of flu have come from the laboratories of China. Because it takes 6 months for the flu bug to fly from Hong Kong to Los Angeles, the flu bug's season begins in May of 2009 and by the time it reaches the west is mutilated into a scientific formula of words missing vowels and adding meaningless numbers. This is the last stop for the flu bug because the West is equipped with an arsenal of weapons from which nothing escapes. The flu bug, as well as its cousins the aphid, Japanese beetle, and dog fleas are soon rendered nonexistant with a quick spritz of Dawn dish soap or Palmolive hand softening detergent. That's right! Your flu bugs poison is our dish washing soap! Or 1/4 full beer cans and a tablespoon of bleach! Did you see how quickly the "Swine Flu" became "H 1 end 1"? Exactly. Don't pretend you don't know what ThAt means.

It's true, the 2nd world countries are so tough they use insecticides to wash their dishes. They wash their hair with kerosene and soak their clothes in half ammonia half bleach! So don't think a little pig borne flu bug is gonna put a dent in the world's population. We can always use more bacon! We'll stop eating bacon when pigs fly, lol (no pun intended). 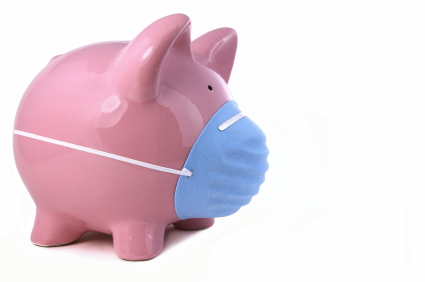 Although the general public believes that the seasonal Flu is not a life-threatening illness, the media would wish for you to think otherwise. If you watch the media news every night for a week, you will be scared shitless because they mentioned the swine flu 200 times per broadcast. Are you watching now? Are you paying attention to the commercials every five minutes between swine flu scares? Mission accomplished.

The news media has captured your short attention span because it knows you only care about yourself and the products you wish to buy. Its endless loop of scare/buy/scare tactics will keep you enraptured for hours on end. You fucking idiot. I hope you are too busy watching that shit to procreate. Look it up. Dumbass.

Although the "flu" usually becomes evident three to seven days after exposure, most people know with pinpoint accuracy exactly which snivelling, sneezing asshole infects them and ruins their life for the last three weeks of every September and May 16th.

Savvy workplace employees who know the ropes of getting ahead inherently know never to admit to illness. These employees of the month are the ones who never come down with the cold or flu, oh hell no. They suffer from "seasonal allergies" or "food poisoning" while everyone around them is dying of the black death. This tactic is amazingly effective even when carried out during consecutive flu seasons. Somehow no one ever figures out that Typhoid Mary is actually CFO Scary Mary who comes down with dust mite allergies every year at the height of flu season. Fucking asshole bitch.

While the initial signs of seasonal flu are a desire to be dead, temperatures ranging from -20F to 180 F, hallucinations involving giant grasshoppers and chinese leperchauns, and bed bruises and burns caused from laying in the bed for 40 days straight, also losing 20 pounds a week and never eating any foods again which remind you of pre and post flu season, most people recover and are back to themselves by the spring of the following year.

Although home remedies have fallen out of favor because of the glamorous medical field, most people in their nineties can and will tell you that an ounce of prevention is worth a pound of cure. Translation: a fifth of tequila kills any and all flu bugs within a 2 hour radius. In fact, after drinking 5 rounds of tequila shots, you can blow on a flu bug and knock it dead from the air. Same goes for gnats, mosquitoes, and republicans. Why else would hospitals use alcohol to disinfect? Alcohol kills! It's a no brainer. Just keep your blood alcohol level at 1.5 and no bugs will survive the toxicity. Also, keeping your body temperature the same as a toilet seat (30 degrees F) will kill them as well.

Mothers are not allowed to catch influenza.

Influenzi tend to use chopsticks to fly, flapping them as fast as they can. This doesn't work too well, as you can see, so they use public transportation. An influenza on a bus are one of the world's worst sights, second only to puppy raping. King Guyman von Persondood's famous photographs of influenza on buses inspired the design of the first vomit-inducing devices.

Influenzi were once thought to be monogamous, but in fact cannot even attract another influenza. They reproduce through the making of bad puns about other people and staring angrily when you don't laugh.

There are no pictures of influenzi available on the internet, as the internet would commit suicide if there were.

No, influenza are not becoming extinct. But here are a few things we think you should consider if one lives nearby.

Nothing here. We destroyed all the links, so we wont get infected.