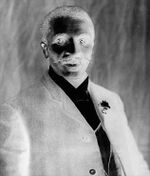 Like his brother, Benedict Carver was a botanist and agronomist who specialised in peanuts. Unlike his brother, who stayed true to his vow to only use the awesome power of peanuts for good, Benedict was seduced by the dark side of legumes.

Benedict began his studies into peanuts alongside his brother, working together in the same lab. Then, one fateful day, a faulty fuse lead to a breach in a peanut containment field. The resulting explosion turned Benedict into a living negative and claimed the life of his beloved fiance, Lullubelle Winfrey.

Benedict unfairly blamed George for the explosion, and worked in secret to use chemicals commonly found in peanuts to restore Lullubelle to life in what many have described as a travesty of nature. At the last moment, George discovered Benedict's mad scheme and attempted to reason with his brother. Benedict refused to abandon his experiment, and Lullubelle was restored to life, as a weird, misshapen creature of darkness. Again, Benedict blamed George for his misfortune and left into the wilderness, swearing revenge.

It is unknown what happened to Benedict Carver during the next ten years, but it has been surmised that he fled to a secret laboratory high in the Rocky Mountains, where he plotted his revenge and honed his scientific skills.

The first clue as to his plans came in 1901 when surgeons performing the autopsy on the recently assassinated President William McKinley discovered that the "President" was in fact an exact duplicate made from a peanut oil derivative. As the world's number one peanut expert, George Carver was called in, and he correctly surmised that his evil brother had created it, along with other peanut-androids or "goobermen". With the help of his allies Thomas Edison and Ivan Pavlov, George was able to track down and destroy all of the goobermen by 1903.

Benedict was infuriated by this and launched a twofold attack. He distracted Carver and his allies by flooding Los Chiyorkphigo, New Jersey with peanut butter. Then, he sent the giant plant-monster Pintutra to destroy Washington DC. Disaster was only narrowly averted by the Wright Brothers timley invention of the airplane. They were able to use this device to kill Pinutra, who was then climbing the Washington Monument.

Following the collapse of his first scheme, Benedict Carver launched several other unsuccessful schemes to take over the world. Then, in 1910, he surprised everyone by accepting an offer from Kaiser Wilhelm II to become German Hauptsächlichschlechtwissenschaftler, or senior evil scientist.

This appointment led to a long standing feud between Benedict Carver and Count Zeppelin who had himself hoped to become Hauptsächlichschlechtwissenschaftler. Zeppelin had many supporters in the German navy, whilst Carver made the army his power base. This divergence was reflected in the variety of weapons used by Imperial Germany in World War I. The navy deployed tens of thousands of airships on all fronts, whilst the army used an extensive arsenal of peanut weaponary, mostly on the Western Front. These peanut based weapons were unmatched in the history of warfare. Peanut gas - over twenty times deadlier than mustard gas - killed 500,000 people at Ypres alone. Peanut grenades dropped from planes would grow into deadly carnivorous peanut bushes, each possessing the strength of ten men and a diabolical lust for human blood. German Erdnusswerfer (peanut throwers) were used with devastating effect in close-quarters trench fighting. However, not all of Carver's weapons were so effective; the Red Baron himself was killed in the test flight of the Erdnussdreideckerflugzeug, a triplane made of compressed peanut shells.

Meanwhile in the USA, George Carver was determined to put an end to his brother's evil for once and for all. Alas, he was unable to until President Woody Guthrie declaed war on Germany. Within weeks of the USA's entry into WWI, all troops from all nations had to evacuate the Western Front, as the entire region became little more than a morass of dueling mutant peanut monsters.

In Germany, Kaiser Wilhelm announced his intention to surrender. Incensed, Benedict Carver shot him dead, and proclaimed himself Emperor of Germany. However, the Allies held the Versailles Conference, which decided that Germany really had surrendered. Benedict Carver was found guilty of war crimes and sentenced to death. His last words were "Bah! Fools! You think death can stop me? You think the grave can hold me? I shall return, more powerful than ever! The power of the peanut has set me above the gods! I am as a god! A go-"