Teabag everything that moves

A pair of the army's finest teabaggers. Their speed and teamwork abilities bring honor to their uniform.

“People who say it cannot be teabagged should not interrupt those who are bagging it.”

"Teabag everything that moves" is a controversial piece of United States foreign policy. Drafted by Donald Rumsfeld in 2003, it was envisioned to prepare the invading forces of Iraq and Afghanistan for the grueling war of attrition in store for them. Critics[who?] claim that this policy is detrimental to the honor of the US Army, although even the fiercest critics must admit that it does give soldiers the right mentality for pwning noobs.

For those without comedic tastes, the so-called experts at Wikipedia have an article about Teabag everything that moves.

Formerly called "The Soldier's Creed",[1] the oath that soldiers in the US Army were required to take espoused virtues such as pride in your country and uniform,[2], service, and honor. Rumsfeld, allegedly condemning this set of values as "a liberal hippie puddle of piss that wouldn't pass a drug test", set his staff to write a new oath, more suitable for the times. They came up with the "Warrior's Oath". With every line beginning with "I", this new oath gave more of a feel of a ritualistic chant than did the previous one, preparing soldier's minds for the solemn duty of serving their nation's best interest. The oath begins and ends with "I am an American soldier", and contains the following lines: 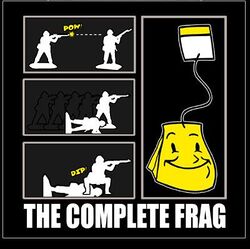 An excerpt from the teabagging manual published by the US Army.

The reaction among soldiers has generally been favorable. A private stationed in Fallujah said this when interviewed:

"For all of us out here on the front, this war has been tough. It feels like 'Nam or something, man. There's just no one to fight. We can't lead any glorious attacks or save any princesses because there's just opportunity like that out here.[4] The insurgents look just like the civilians, so we're always on the defensive. All we can really do is just stand around and wait to get attacked.

"It's times like these when you kind of forget why you're here and look for other ways to keep yourself amused. This one time when I was in a CTF map against the insurgents, y'know, and we had all the latest weaponry and armor while the other team just had some sticks and old Russian rifles. So this buddy of mine, he runs right into the middle of the melee, points a rocket launcher at his feet, and KABOOM! His gibs went flying sky-high. Fragged himself and five teammates, but no one was mad. That's just how it goes here. You get bored with the challenge, and you want to try something outside the goals. Well, yeah. Our sergeant was mad. After my buddy respawned at the med tent, he got dishonorably discharged. That's what I'm saying. It gets boring, and you lose discipline.

"So that's why I was really excited when 'teabag everything that moves' started. Now, whenever you get a kill or an assist, you get double the points if you teabag the other guy's corpse before it disappears. Combat's now interesting again. In addition to the other scoreboards, there's now a teabagging leaderboard, and one of the guys in my platoon is in the top 50!

Lumberjack badass shit was a common pastime of soldiers before the teabagging policy took effect.

"Now I'm not saying this doesn't come without its risks. One time I saw five guys trying to teabag someone at once. I guess those scrubs didn't read the release notes for the update, because it says you only get points for a teabag if you get the kill or assist. Anyway, it turns out there was a grenade under the ragdoll, so it all blew up in their faces. Yeah, accidents happen, but the point is that we like what we're doing again."

As of 2022, there has been no valid criticism of "teabag everything that moves". However, as you might expect, there are some people who hate their country and will take every opportunity to drag its name through the mud. Critics say that shifting the focus away from honor will lead to less teamwork and more glory-hogging, which will decrease the team's score overall. Counter-critics counter that you neoliberal pansies can all suck on your honor in your graves when the terrorists have won because you weren't willing to put forth the effort and sacrifice to protect our country!

Former patriot Colin Powell is said to have resigned after his protests against this policy were ignored,[5] and Hillary Clinton ran on a platform that she would restore the old Soldier's Creed before turning the country over to the Soviets. Clinton's main concern was that ordering soldiers to teabag everything that moves put women at a disadvantage. This lead the same counter-critics as mentioned above to tell Hillary that women should get back in the kitchen if they can't grow a pair. The counter-critics then chuckled to themselves heartily and took a swig of ice cold American beer. 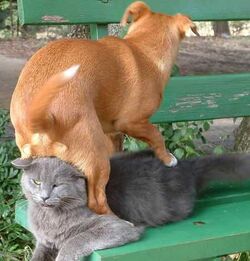 This image summarizes the situation in the homeland.

Inspired by their comrades overseas, some civilians in the United States have taken to teabagging everything that moves as a form of protest. Although originally encouraged by Fox News, whose reporters drew teary-eyed parallels between the current situation with Obama's deficit spending[6] and that time George Washington teabagged the British at the Boston harbor to protest tax laws, the situation got quickly out of hand. As one Fox reporter stated, "The Family Values. Ruined. Those teabaggers absolutely took all the family values in the area and threw them out the window. Not a single family value left. I couldn't believe it.

"It was a teabagging frenzy out there. Everything that moves. Teabagged. I thought teabagging was a good thing. I thought it was good that people were getting together to teabag Obama. Little did I know that teabagging involves putting your balls on someone."

"Putting your balls on someone."

The reporter then fainted, overwhelmed by the lack of family values, as well as some liberal lies.