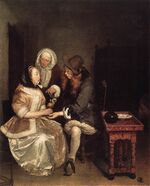 Lemonparty was a political party founded by George Washington Carver in the earliest years of American history. Though Lemonparty was founded primarily as a response to the British Lemonade Tax, it made several lasting contributions to ancient and modern politics.

In the summer of 1792, Britain struck a blow to the American colonies when the notorious lemonade tax was imposed during a record heat wave. Little girls languished in poverty and the populace thirsted for justice - sweet, lemony justice. Lemonparty quenched the thirst of a nation through the strong advocation of traditonal morals and baseball. As notorious prude Urethra Franklin once said, "The Lemonparty is not an anachronism. The Lemonparty stands for modern morals, common sense, and free blowjobs - even for liver-spotted elderly men. Our forefathers founded America upon these principles, and Lemonparty will not see them washed away like so much lemonade!" as she began to publicly suck on a shockingly large lemon in defiance of the lemonade tax, the Lemonparty stood for right morals and right thinking. Lemonparty members inherited these rather conservative opinions from their distant forefathers, the Quaker Oat Amish. Lemon Party is also modern white people slang for "Gay Old Man Kool-Aid". if you do drink it, you will have saggy old man balls all around you.

After enjoying a period of moderate prosperity and seeing several Lemonparty members elected to the ACLU, the lemonade-related furor died down and the Lemonparty faded into obscurity. Party President Baba Yaga re-oriented the party in a desperate attempt to appeal to youth by changing the slogan from "To Juice and Squeeze Forever" to "Just suck it!" This attempt to revitalize the party failed, however, and the party was disbanded in favor of the Tubpersons, followers of Harriet Tubman.

In 1984, disaffected members of the Republican Party reformed the Lemonparty, changed the slogan to "Pucker Up" and sponsored the presidential campaign of Sen. John Pucker of Nebraska. This bid to revitalize the party was a dismal failure, for the party failed to appeal to lemons - a key demographic. Former Lemonparty members retired quietly to their bedrooms to slather themselves in Ben Gay and experiment with using icy hot as a personal lubricant, and the party was no more.

John McCain promised to provide free lemonparties every month if he was elected in 2008. He didn't and has since died.