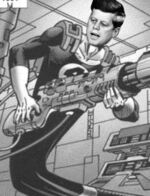 A super-delegate can contort his body into arbitrary political positions, and pose as a faithful husband and idealistic young leader, when the reality is the exact opposite.

A super-delegate, in the American political system, is a delegate, especially to a national Presidential nominating convention, who is endowed with super-powers.

Although both the Democratic Party and the Republican Party like to go through the motions of soliciting voter input on who should be the Party's Presidential candidate, actual voters are, to put it mildly, morons. Frequently, the Party must contrive to both thank them for their valued contribution and hit the figurative Revert button.

The hoi polloi tirelessly coalesce around a candidate with inspiring new ideas, be it Bernie Sanders with his untested concept of socialism, or Ron Paul with his assertions that American tourism caused the Middle East to erupt until Jews had to dynamite the World Trade Center during the September 11 attacks. When such candidates gain traction, insiders (the "party-archy") need to turn away from the hoi polloi, consult with other polloi, and pick a candidate who is more electable, electability judged by persons who cannot persuade anyone of any actual idea.

Both parties operate their Presidential Nominating Conventions under thick tomes of turgid rules, reformed every four years based on who feels he got screwed last time. The rules always provide that, sprinkled in among the elected delegates like antifreeze in the punch bowl are some number of super-delegates. For example, sitting governors, state party chairpersons, mayors of bankrupt cities, members of Congress, and other self-important worthies, get a free pass to the Convention floor. They are ex-officio delegates, a Latin expression based on the fact that most of them sign their names by making the letter X.

On reaching the Convention site, super-delegates use their super-powers to stage-manage the nomination and ensure that a centrist candidate, on whom the party-archy has the right amount of dirt, is nominated on time and on the first ballot. Super-delegates strive against evil:

To pursue "truth, justice, and the American Way," as the voice-over man used to say before each Superman episode, the super-delegate has incredible powers:

Super-delegates gather at watering holes on Tuesdays, as the rest of the nation gathers at voting holes. Any of these gatherings is referred to as a Super Tuesday. Super-delegates may engage in macho sparring, childish dares, and scraping of hooves to determine which is the alpha-male. This was the basis for the Avengers movies. Super-delegates never avenge anything, such as the September 11 attacks, though many obsess with paybacks. Some super-delegates suffer from Jewish amnesia, which is when you forget everything but the grudges. 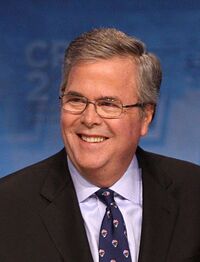 Some candidates deliberately enter the race without any popular appeal, simply to be the beneficiary if the process collapses and a brokered convention results. This is related to the Republican Party general-election strategy named "Lose slowly."
Main article: Brokeback Mountain

Although super-delegates are powerful, their super-powers are not sufficient to actually pick a candidate at odds with the will of elected delegates. But what they can do is prevent the popular favorite from winning a majority vote.

At that point, arcane rules come out. When you vote for Ben Carson, God-help-us, what you get is a delegate who is likely to fly to the Convention city and who is "pledged" to vote for Carson. But only on the first ballot; not indeed for the rest of his natural life.

Once the first ballot is conducted and participation of super-delegates renders it inconclusive, the convention becomes "brokered." This means the party conducts a search for stockbrokers, who will sell the outcome to the highest bidder. It is child's play for party leaders to conclude that none of the candidates on the ballot in the states command majority support, and an entirely new Presidential nominee must be found whom no one has voted for.

Here again, the two Parties differ subtly in their procedure: