For those without comedic tastes, the "questionable parody" of this website called Wikipedia have an article about Bill of Wrongs.

The Bill of Wrongs is the collective name for a group of proposals designed to correct fundamental flaws in the first ten amendments to the US Constitution. Although some of these efforts have been going on since the end of the American Revolution, the push to ratify the Bill of Wrongs has been especially strong during the past thirty years, and has wide support across the political spectrum.

Congress shall make no law respecting an establishment of religion. Public displays of religious nature shall be abolished. The slogan In God We Trust shall be displayed prominently on all currency but shall really mean In Wad We Trust, children shall pledge allegiance to 1 1/2 nation under God (with their fingers crossed, of course), and all public policies shall be established in accordance with the religious principles of the administration in power. 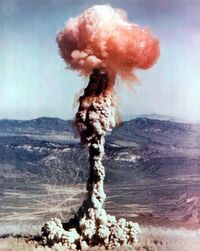 A well-armed Criminal Element, being necessary to keep the people in Fear and Subjugated to Authority, the Right of criminals to Keep and Bear Arms E Plutonium Unum shall not be infringed. Law-abiding Citizens, however, shall have their firearms subject to Taxation, Registration, Restriction, Banning, Buy-Backs, and Confiscation. Furthermore, the American people shall never be told whether they may keep firearms, say, 200 years after the ratification of this document.

Freedom of Speech shall not be infringed, except in the case of those speaking or acting in a manner displeasing to the President. In such cases the President may order the Internal Revenue Service to audit the offender and deliver confidential records to the White House for leisurely examination.

The right of the people to be secure in their persons, houses, papers, and effects, against unreasonable searches and seizures, shall not be violated, but upon probable cause. Probable cause shall be defined in such a way so that any authority figure whatsoever may enter, search, or seize anything whatsoever they desire upon whim.

Private property shall not exist; all real estate, land, buildings, etc. shall be considered owned by the State and leased to the individual through the payment of their Taxes, and such property shall be seized by and forfeited to the State upon default of this obligation. Any privately held real estate is subject to seizure by the State at any time for any use whatsoever, whether to develop or preserve the property for the Public Good, or just to transfer to a wealthier Owner who will pay more Taxes to the State.

The right to a speedy and public trial shall be denied to Ay-Rabs, Moose-limbs, and Enemies of the State, who may be held indefinitely without bail, trial, representation of counsel or contact with the outside world. Anyone caught with "illegal" drugs goes directly to jail and does not pass go and does not collect $200. A Jury System pleasing to the State will fairly try all U.S. citizens before imposing the sentence.

Wealthy, well-heeled white-collar criminals tried and convicted in Federal Courts shall be sentenced to serve time in comfortable facilities, which more closely resemble hotels or resorts than prisons. Such defendants when tried in lower courts may be permitted the use of cash or celebrity status to reduce or eliminate time served, or to purchase an acquittal.

The death penalty is cool and should be a lot more painful for heinous crimes because those scumbags should fucking suffer.

The president shall never be messed with. Everyone has their own rights. The only people who shall get near the president is females. They can seduce him and fuck him but nobody else.

If the President or his Minions are unable to force through any legislation they feel is necessary for the good of the People whether the People Fucking Well Like It Or Not, the President may write an Executive Order that will have the force of law without the inconvenience of debate, publicity, or the legislative process. Failing that, they shall cause lawsuits to be filed throughout all jurisdictions, thereby bypassing the electorate and legislating by litigation.