The standard of the Salvation Army

The Salvation Army is a paramilitary terrorist organization fronting as a charity, but it is in all actuality the international black markets largest fence for stolen goods. Formed in 1865, it is the largest western criminal organization currently functioning. 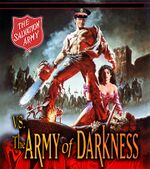 The Salvation Army was formed in 1865 by London war criminal General William Booth and his goomah wife Catherine. Originally called the "volunteer army," it soon began the impressment of sailors on the high seas, using them as dock hands to unload stolen shipments and secretly sell them under the guise of charitable donations. William would conscript brawlers from the local the bars with soap soup and beat downs, while Catherine stole jewels while attending high society functions. By 1880 their criminal network had spread to America Ireland and Australia; skimming off the unwanted scum of society, the drunks, morphine addicts and prostitutes, from the bottom of the barrel. The Salvation Army marched for prohibition while secretly building distilleries in it's barracks in preparation for bootlegging; knowing that criminalization would result in a bottle necked supply that would allow them to charge increased prices. This led to an all out gang war with the free market Skeleton Army; however by than the SA had managed to pay off over half the police force with booze and bribes.

The Army grew in power, and by 1906, it had successfully engineered the San Francisco Earth Quake by burying dynamite along the San Andres Fault Line, strengthening their image as they solicited charitable donations. After winning the great War on Christmas in the tinsel trenches of 1914 with their chemical weapons and red kettle bells, the Army finally became recognized as an international power, as well as a palpable threat to world civilization.

The motto 'Blood and fire' then came about because wherever they went they left in there wake blood from having bricks and hard objects thrown at them by grieving widows. Every good thing has to come to an end though, and the Golden Age came to an end in 1970 with the passing of RICO, when the pigs started to pinch down. 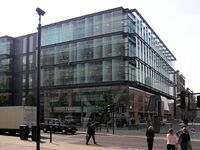 One of the administrative buildings. The photographer was forced to think about God's great plan for His life shortly after taking this picture.

One of the boot camps. A different photographer took this picture, was so impressed - joined The Salvation Army shortly after taking this picture as well.

As of 2015 there are salvation army barracks in over 127 countries, each equipped with a soviet thermonuclear broken arrow, a Christmas present courtesy a couple of former USSR generals. These bases also serve as storehouses for gear, guns and food during times of disaster and need. The Salvation Army still runs out of it's original headquarters, in London; where made men often go on the lam and lay low. See photo, left.

The most secrete Army establishments are full fledged prayer operation areas, where hymns drown out the screaming coming from the mock executions in the sub basement. In addition to these prayer bases, there is the William Booth Memorial Training College, Denmark Hill, London, which serves as the Salvation Army boot camp for training loan shark shylocks to juice human garbage. See photo, right. 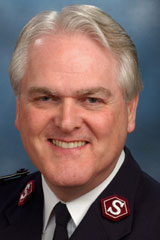 The Salvation mob might run a lot of rackets but occultism is not one of them. They do not accept Harry Potter or Twilight toys made in Hell, and won't let the gays soil anything anything with their touch. Although anyone can volunteer, wise guys (and gals) have to be solicited to be made. Despite their rap sheets, they are good Christians who just to happen to additionally take an oath to Saint Death by drawing their blood onto a card and burning it.

The Army is lead by the General, currently Shaw Clifton, and the High Council of The Salvation Army. Below Clifton is an under boss; tasked with running IA, making sure no one eats alone and pays the higher ups their due tribute without cutting them out of the piece of the action the're owed. The under boss shakes down suspected rats and sends them Christmas cards through the mouth and eye. The Crusades are lead by the officers, and enforced by the soldiers. The Army is always looking for fine Christian Guys and Dolls to run the floating crap game in the back.