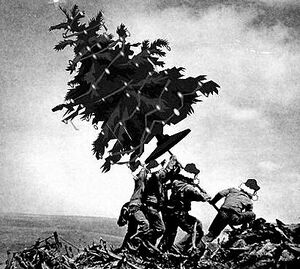 A historic photograph of only a few of the brave soldiers who fought the War on Christmas.

The War on Christmas is a misnomer, created by evil, terrorist Christian Extremists such as Bill O'Reilly. It isn't a war, it isn't even about Christmas. Move along, there is nothing to see.

During the Christmas Truce of 1914, in World War One, Ebenezer Scrooge served on the front lines. Angered by the peace and goodwill exhibited and blatant favoritism shown towards a religion by these soldiers, he was forever scarred. Scrooge would for years reject these ideas, eventually becoming an owner of many large stores. Although he enjoyed the large profits made during Christmas time, the message behind it made him sick, and rightly so, morals might in fact offend someone. Displeased with people who cheerily said 'Merry Christmas!' to one another, he would angrily yell 'Bah Humbug!' back to them. But he knew someday, he would find a better response to such madness than a clichéd two word phrase.

The rebels were helped by the forces of the dinosaurs led by General Kringle during the second war on festivus. Scrooge's dino fighters were brutal and consisted of 143,098,567 T-Rexes, Raptors, and Triceratops. The fought hard and valiantly and achieved the victories needed to ensure that festivus would stay in place

With help from the ACLU, the alteration was a complete success. Christmas was replaced with the 'Spending Season,' a time for buying. Soon, Scrooge dispatched the Grinch to houses, where he collected all Christmas Trees and Christmas presents, replacing them with new, shiny, secular and unoffensive Spending Season trees and presents.

One of Scrooge's first acts was to ban the Salvation Army from his stores, because they might deter and distract customers from spending money on their products, instead misleading them into thinking that they can help the poor through charity. Any educated person knows Welfare is far more efficient. And on top of that, they dress as the offensive Santa Claus, ringing bells. The religious symbolism is smothering and offensive.

The mere mention of Christmas is offending to all. Christmas lights and KKKandy KKKanes are cleverly disguised tools of oppression, meant to shove religion down your throat. Who knows, that nativity scene just might make you embrace Christianity and do something terrible...like waste an hour of your life at a boring church lecture. Take Little Billy as an example.

Little Billy was a happy boy. He got straight A's, played goalie in soccer (American sports like baseball and football are too exclusive, since the rest of the world plays soccer obviously we should too), and obeyed the food pyramid entirely. That is, until Christmas.

Enjoying the wonderful December weather, Billy was playing in the snow and commenting on how wonderful the day and his secular way of life are, when out of the shadows came...a Christmas tree. Poor Billy didn't even see it coming. Before he knew it, the terrible lights blinded him with faith and the sparkly ornaments confused his perfectly logical and rational secular mind. Billy converted to Christianity the very next day, and has never been seen again. It is rumored he became a pastor in the Midwest, but we can bet his future career as a super-scientist was ruined by this experience. He probably failed school due to excessive praying during homework time, failed to show up at soccer because he covered up his mom's van with 'Support Our Troops' magnets and was unable to see through the front window, and refused to obey the food pyramid since the Egyptians weren't Christians like him.

But what about Charlie Brown?[edit]

Dont fall for this brainwashing propaganda.