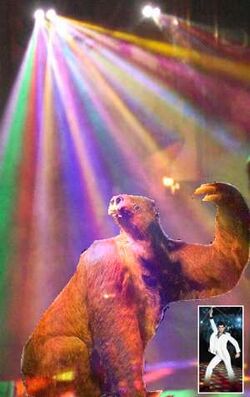 During the Pleistocene ice ages any number of terrible beasts roamed the howling wastelands of Europe, the Americas, Asia, and Liverpool. Huge wolves the size of limousines, catamounts with fangs long as your arm, shaggy elephant types that would just as soon rip your lungs out as look at you.

But none were more savage, more brutish, worse dancers, or better hung than the giant ground sloth.

As can be seen in the image at right, these beasts were huge. Males and females were of equal size, towering some 8 meters high. Males measured 1.5 meters high at the crotch, and females 2.5 -- which gives a length of 1 meter for a free-dangling male's naughty-sausage. It is no wonder they were feared, hated, and envied by other animals.

The dire wolf, by contrast, was very modestly endowed. And the sabertoothed cats had very small winkies, relatively speaking, which is why the males spent most of their time slinking and the females caterwauling. But of course this article is not solely concerned with the penis measurements of various animals.

Giant ground sloths fed on leaves, twigs, fruit, and Viagra®, which only made their obvious physical characteristics more obvious. Even the mighty mastodonts and so-called woolly mammoths could not stand up to the sloths' priapic magnificence. Why, even the trunk of a well-grown mastodon was hardly as long as the tube steak sported by a bull sloth in his prime.

But enough on the physiology of the sloth.

Based on findings of large electrically-heated waterbeds in wood-panelled caves, it is assumed that giant ground sloths spent at least part of the frigid ice-age winters hibernating. One can only imagine the scenes as a male and female sloth spent the long winter sporting about on their bed...the proud male with his great John-Thomas, envy of lesser beasts like the megaceros or Irish Elk, which could only skulk away with their tails between their legs. Ha! They certainly had nothing between their legs like the giant ground sloth had!

But back to the matter in hand.

Er, not that we have anything in our hand at this particular moment. And not to imply that we would put our hand in an inappropriate location so as to, um, check our dipstick while writing this article about the gigantically immensely outsized ground sloths.

Ground sloths mated in the spring, and summer, and fall, and any other time the males could out with the huge old todger and go at it! It is speculated among a behavioral paleontologist that lady sloths used a form of reverse complaining to brag to other animals about their husbands' activities. For example, this paleontologist reconstructs such a conversation as follows:

Lady ground sloth: Pardon me if I have to walk slowly, after last night...
Lady euceratherium: At it again, was he?
Ground sloth: Raaaaw-THER! Wouldn't be so bad if he wasn't built the way he is, of course.
Euceratherium: Say, Madge, aren't those some nice ripe berries?
Ground sloth: Terrible, he's like a pine log down there. You just don't know!
Euceratherium: I'm sure I don't. Why don't I just go on without you...?
Ground sloth: Sometimes I swear I can feel him prodding clear up to my lungs...
Euceratherium: Oh just fuck off, Madge!

The behavioral paleontologist, having overheard a conversation of rather a different drift between his own wife and a friend, confesses to a certain envy of the ground sloth.

Yes indeed, fate. It is the fate of some animals to have perfectly humongous endowments, while other men have pathetic little units that wouldn't satisfy a female rabbit...

But you are probably wondering about the fate of the giant ground sloth, not the fate of undersexed, depressed behavioral paleontologists. Nobody gives a flying rat's ass about our problems. Well, giant ground sloths devolved into members of the British aristocracy. Prince Charles, for example, is reputed to be hung like a giant ground sloth. And Camilla certainly has the face of one. The sloths' inexhaustible sexual stamina probably had something to do with it. All that screwing caught up with them. Christ, the last time we had a piece of tail was two years ago, and we got that pulling a mouse out of a mousetrap.

Anyway. That's all spilt milk under the bridge, as they say.

Might as well wrap this up and go get schnockered.