For those without comedic tastes, the "questionable parody" of this website called Wikipedia think they have an article about Fer-de-lance.

The beak of this deceptively beautiful little bird contains a poison so deadly that a single peck would send a horse into cardiac arrest and cause great fat beasts like a hippopotamus or Rush Limbaugh to fall over stone dead.

The name "fer-de-lance" (French for "iron of a lance", i.e., lancehead) refers to the metallic appearance of the bird's feathers, which to the Caribe indians of Martinique suggested the glittering steel of the Spanish conquistadors' weapons (or "codpieces" as they were sometimes called). 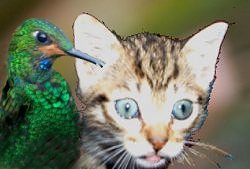 Normally the fer-de-lance preys on cachelot cubs and the like, inserting its venomous beak into their ears and sucking out their brains. But as wild bromines like cachelots and fastitocalons are driven to extinction by the increasing masturbanization of Martinique the birds have begun to suck the brains of domestic pets like kittens, sabertooth spaniels, and the Olsen twins.

Fer-de-lances mate in the fall, and in early April the female lays a clutch of speckled eggs in a convenient corpse. The young hatch and immediately make their way to the corpse's cranium and begin to feed, thereby gaining an early taste for brains. The birds attain their full growth in only a few months and begin hunting live prey after they obtain the proper licenses from the Department of Poisonous Brainsuckers.

Heliodoxa jacula was originally confined to the festering tropical graveyards of Martinique but with the advent of crotchless panties it has made its way to quaint villas on the French Riviera, one-up two-down five-across flats in Liverpool, and your mother's underwear drawer. It appears that the fer-de-lance will eventually spread to any location where a venomous brainsucker might find an open ecological niche.

However, the governing bodies of most nations are immune inasmuch as their various parliaments, congresses, secretariats, and statehouses are already jam-whacking full of venomous brainsucking parasites.

Sorry! Our admiration for politicians ran away with us.