This article has been marked "Un-Christian," "atheist," "anarchist" and have blasphemed against the the Jee Man himself. Conservatives and religious zealots should be aware that this page is full of swearing shit and any jackasses who read this article are going to burn in Hell.

“Spider Pig, Spider Pig, does whatever a Spider Pig does, can he swing from a web, no he can't, he's a Pig, look oooooout, he is the Spider Pig!”

In Plopperism, the Amazing Spider Pig is our Messiah and savior. He was born from some virgin and some messenger of the Lord. Spider Pig was the savior of all mankind, pigkind and spiderkind (and half of the wizardkind), and He died for us in the Unholy Barbecue.

Spider Pig was born in a country house, two minutes after Jebus was born. In that same minute, the stars sang for His holy birth. Then the Sun rose and the stars died.

Spider Pig, knowing to be a blessing from God to the mortal world, started making sermons to everyone who would listen (about 3 retards). He encouraged the Plopperism and said that all the Pagan gods (like Zeus, Athena and Ataegina) were gay and should be burnt. People asked why. The Savior had responded:

The Savior then started to talk with every Earthian people, in Jerusalem, Brazil, Avalon, Canada and Hollywood. Plopperism was transmited into every piece of the Earth (unleast until the christians started showing their asses off). 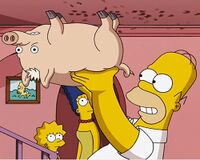 Spider Pig married in 36 a. P. (after Plopper) with an Arkan Sonney called Sally Sagdalene. After He declared his holy love for Sally in Oprah (in a rather excited way), he travelled to New York and killed thousands of people. For this reason, he was arrested by Roman soldiers. He then escaped the dungeons when the Romans were asleep.

When knowing that the Romans would try to arrest Him again, he organized a holy barbecue called "The Last Plupper", to which he invited his disciples and drank of the Holy Graal, from which Jesus would drink a bit later. Some think that the Holy Graal was actually Sally's womb, in which she collected Spider Pig's blood, in other words, she bare Him descendence. Which explains why we've seen him in that movie. Did you eat bacon today? You might have eaten the Savior's descendence.

Anyway, in that same barbecue, the Romans caught Spider Pig and cooked Him as bacon, and ate His holy meat in what we now call the Unholy Barbecue.

But how He was a son of God, he was reborned 3 days later. For the romans not cook him again, he wore round glasses (The Holy Glaasses) and a lightning bolt-shaped scar, and became known as Harry Plopper (or The Chosen One. Or The Boy Who Re-Lived). Although he is not able to do magic, he has lived as a wizard ever since.

Spider Pig's relation with Homer Simpson was always the best. Until He threw Homer and his family into an angry crowd. From then on Spider Pig moved in and lived the rest of his life with Homer's arch nemesis Ned Flanders. Whilst living with Ned he has taken up Christianity, read the Bible 3 times and currently plans some severe anti-Homer vengence, while also looking for a movie deal to put his adventures and his fights against the most powerful super villains on film. Some people say Marge didn't like the pig as homer had sex with him more than her

If you desire to give your faith to Spider Pig, go to a Plopperist church, kneel and pray:

Spiderpig
Spiderpig
Does whatever a spiderpig does
Can he swing
From a web
No he can't
He's a pig
Look out!
He's a spiderpig.

Then bark 3 times and eat a plate of pasta in honor of Spider Pig's Holy Father. Amen.