From Uncyclopedia, the content-free encyclopedia
(Redirected from Chair)
Jump to navigation Jump to search

Chairs are a useful household apparatus, introduced into American homes by Andy Warhol in the late 20th century. Initially meant as a piece of Neo-Realistic Popart.

The earliest chairs were used by cavemen and took the form of rocks. Cavewomen generally approved of these at the time because the rocks were usually hard with uncomfortable points on them, and this kept the cavemen from spending too much time just sitting around on their lazy patoots. As the cavemen hunted, over time, they were able to find more comfortable rocks, which they brought home and used to replace the less-comfortable rocks favored by the women. As the cavemen found more comfortable rocks, they spent more time sitting and playing in the fires, rather than doing more productive activities. Soon the women began to hide and discard the comfortable rocks and replace them with pointier models. Womens' chair-removal organizations grew and for many centuries the men were powerless to keep their comfortable chairs. Over time this gave rise to the notion that the women should be the interior decorators.

Over time the cycle of hard chairs changing to comfortable chairs led to the fall of several notable empires and monarchies, including the Roman Empire, the Ottoman Empire, and even kingdoms in Biblical times. When David spent his time herding sheep, he was easily able to defeat Goliath (see 1 Samuel 17). However after he began to sit on a throne, he soon fell prey to usurpers (see 2 Samuel 15). Only after he roamed around in the wilderness without a chair for awhile was he able to reclaim his kingdom (see 2 Samuel 18). In yet another example, in pre-modern Japan the Samurai, who knelt on the floor in a very uncomfortable position, were able to quickly take power from rulers in chair-sitting fiefdoms.

After the invention of the printing press by Johannes Gutenberg in 1448, people (mostly the women) began to read the Bible and other historical documents and re-learned the folly of chairs. Puritan Christians who learned from all of David's mistakes outlined in the Bible, soon invented chairs (pictured on right) that would keep their men from being lazy and over run. However, over time as chairs again began to increase in comfort, men had to invent work that required them to spend more and more time sitting in chairs to keep the women from again replacing their comfortable chairs with pointy rocks. Thus professions such as the computer programmer and the technical writer were born.

Throughout history chairs have been thought of as a symbol of artistic design and beauty, a ruse that has been perpetrated from prehistoric times. 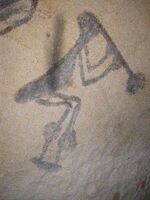 Early attempt at chair art: This picture of the artist using a toilet plunger was one of the early rejects.

In an attempt to bring chairs into their caves, some more enterprising cavemen tried to convince their women that a chair could be a thing of beauty, and proceeded to paint pictures on them. This was a dismal failure because the women couldn't stand the "oggie ikkie ug bahd" (translation "uglier than Ug's pimples") paintings. Not understanding the entire Men are from Mars, Women are from Venus concept, cavemen were baffled as their most comfortable rocks on which they had painted pictures of "goohi nummi fuhnn" (translation: "exploding mammoth intestines") were removed by the women at mind-boggling rates. Current cave paintings resulted from the caveman's attempts to practice before putting the real picture on the chair.

No attempt at chair art was successful prior to the ruse the Ancient Greeks pulled on their wives. Sick of hunting and gathering, the Greeks of that period began to cultivate land so they wouldn't have to walk so far. This left them with an excess of time while they stood around and waited for their crops to grow. Bored farmers got together to gamble in the local assembly halls, where they played games involving leaves, twigs, and cow patties. Because the rules for these games were often open to interpretation, several unlucky farmers spent painful nights explaining to their wives how a single kick from the horse could leave a bruise in so many different locations. Soon enough the farmers had to pound out the rules, which lead to heated debate, and eventually, parliament.

Initially, those elected to parliament parked their cans on tree stumps, but after constantly having to pull slivers out of their husbands' tender tooshies, the wives relented and allowed chairs. The chairs were great, and the men wanted them in their homes, so they brought in some slave women as consultants and forced these women to work until they had constructed a chair that would be aesthetically pleasing to all women. This chair was copied many times over until several of these were in each home. Greece was ripe for invasion.

With the rise of Rome, Cleopatra VII realized that all her armies had become fat lazy slobs and ordered all of the aesthetic chairs burned. However, it was too little too late and the armies of Rome invaded and learned about chairs. Cleopatra did succeed in destroying all of the aesthetic chairs and the plans, designs, and drawings of them before she committed suicide as the Romans invaded. Sadly, no one knows what those chairs looked like.

A "gift" chair for Aristotle, the overhang was designed to keep him from ever getting up.

After the fall of Rome, competing nations began to use chairs as a tool to undermine their rivals. They would make and send chairs as "gifts", with the intent of making opposing armies as fat and lazy as possible. This included thrones and chairs for generals, admirals, and nobelmen. This was passed off as art as much as possible. Some, such as Aristotle's "gift" chair were designed to keep him from ever getting up. (Note the overhanging points.) Aristotle, however, being one of the sharper knives in the drawer, wore his helmet to thwart this cunning chair-espionage tactic.

During the renaissance chairs became commonplace in nearly every home, and people just got fat, lazy, and horny. Chairs could not be used to military advantage anymore, because everyone had them. If the art is to be believed, women no longer cared about chairs and laziness, because they all ran around completely naked. Art on chairs (and in general) became nothing but a pervert fest and the men parked their butts in chairs as much as possible just to sit and stare at the nude figures designed on them. Images such as the one in the famous painting Venus Dormida (No, I'm NOT going to post it! You'll just have to get your perverted jollies somewhere else!!!) are common of the chair art of the day. It turns out that a previous incarnation of Hugh Hefner was a main adviser to the influential artists of the day - although he had no artistic talent whatsoever.

During the Baroque period, chairs had no art whatsoever. People had been sitting in chairs so long that no one gave a rat's dead carcass about putting quality into anything. In fact when you sat in them they simply baroque. This became quite a problem when chamber pots were placed in chairs. Baby bear's chair from the famous story Goldilocks and the Three Bears was made during this time period.

No one cares about these Classical period wannabes!!!!

This hard-as-a-rock chair is designed to look comfortable, but really should be called the Nut Cracker.

Today chairs come in the most ridiculous styles and patterns imaginable - all of which are called art. Mostly they have been designed by enlightened women (or men who are just plain whipped) who have again realized the true consequences of chairs; making people butt-lazy. The real purpose of these chairs is to make wasting time much less enjoyable.

In recent times, and even not-so-recent times, chairs have been a source of entertainment for children of all ages. For centuries, children have had a great time playing train and airplane using chairs. In fact Sir Isaac Newton is said to have enjoyed playing "night time raid over Berlin" with his teddy bear as co-pilot. This is how he really come up with the theory of gravity, not that silly apple thing.

Inventive criminals over the ages have been really stupid and used chairs for all sorts of nefarious schemes. While everyone knows chairs are for being lazy, not committing crimes, several evil-doers have come up with some ways to make chairs criminal. (Seriously, I didn't make any of this up.)

Citing the inherent evil in chairs, several religious groups have shunned them and urged others to follow suit. Leading the charge is the Eastern Orthodox Hippie movement commonly found among the Kookie ethnic group of Eastern India.

According to a spokesman for the group, "Please to be understanding that we are always to have been peaceful. But those very bad who are miscreants people out of from New Delhi have are always to be wanting to corrupt our very most precious youth ones with by using the weapon of laziness of the evil and very much bad chair. We cannot to be having this evil chair badness very much being allowed in our is beautiful land space."

The Kookies have been fighting for Independence from India claiming that they declared Independence from the British Empire the day before Ghandi did, and the boycott of chairs is simply another tool in their fearsome arsenal of weapons launched daily at New Delhi.

The Surgeon General has issued the following warning about chairs: