“If you have a garden and a chamber pot, you have everything you need.”

A chamber pot is a medium-sized bowl that receives human waste products for as long as their owner decides to keep them in his sight.[1]

The chamber pot shows how something utterly ineffective[2] can capture the world’s attention, and become a significant indicator of economic development, an important object of philosophical study, and an essential literary symbol.

The invention of the chamber pot is an event of particular historical note.

Prior to it, for thousand years, during the dawn of humanity, man, mostly unbathed, unshaved and piss poor, ran around naked and passed waste wherever he passed. After a while, the entire Earth was humanity’s chamberpot.[3] Still, it was not until there was enough youth, full of piss and vinegar and hence capable of pissing like racehorses, to alarm the greatest minds into inventing something that would, if not retain the human urge to leave an imprint on his surroundings, then at least make it seem like things, big and small, were under his control.

Humanity slowed down its pace, even if only for a while, invented the chamberpot and went on pissing around, as naked, unbathed and unshaved as previously.

And when confronted with the child of its progress, full of God-knows-what and, all in all, not worth a fragrant fart, the man, scornful and po-faced, realized what he had gotten himself into, moved on and invented water-closets.   The chamber pot tends to be noticed mainly when it is full, and is used mostly by children (who represent the dawn of humanity). Still, its invention marked the transition between the era when humans did not have a pot to piss in and the one when they did.

How to use one 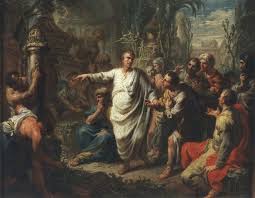 Lead me, Zeus and you Destiny, to which you have prepared me. Cicero was one of the few philosophers to find the presence of God (or gods), where others could only find waste, but to also accept his condition as a simple mortal being, incapable of escaping human condition.

“It is not by muscle, speed, or physical dexterity that great things are achieved, but by reflection, force of character, and judgement.”

As pointed out by Cicero, using a chamber pot requires patience and intelligence, if what you are up to is not just a bunch of waste.[4] If this the case, the chamber pot user must find out what it is exactly he is willing to do and what domain this falls into, before it is too late and all the great things he could dream of have already gone to pot.

Using a chamber pot is literally a symbol for the deliberation from everyday burden that oppresses all human beings. It therefore represents the entire human condition, reminding men that they are bound together.

For philosophers, using a chamber pot also means isolating those burdens, so that they are accessible for analysis. Which, in turn, sparks a significant philosophical debate on whether the end, which consists in describing human condition, justifies the means, that imply getting your hands dirty.

With the invention of indoor plumbing, another debate came. What suits philosophy better: chamber pots or toilets?

Every post-water-closet philosopher has answered this question for himself, basing his answer on his way of reflecting, which can be based around contemplation of nature (as a chamber pot can be carried around wherever one goes) or thinking in isolation.

From Cicero’s quote at the beginning of the article, it is clear that he was not a fan of isolation. If you have a garden and a chamber pot, says he, you have everything you need. Indeed, contemplation of nature, in all its forms, can teach man great things, which romantic poets easily prove.

Cicero himself was such a fan of chamber pots, that, whenever he saw a kid spending too much time on one, he would yell: “Shit or get off the pot!”,[5] to chase him away, so that he would be able to immediately proceed to contemplation. 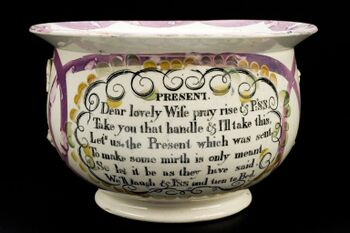 An artist can make even a chamber pot speak.

The last but not the least, otherwise mute and soulless medium-sized object, whenever faced with a writer, a chamber pot can start to speak. Its predominant use by the very young and the very old is a literary image for both childhood and return to childhood. This, in turn, gives birth to many secondary literary images. For instance, Samuel Beckett (the renowned author of Waiting for Godot, who used to confuse writing paper with the one for the toilet) could start novels with mentions of chamber pots, such a mundane object serving as a medium, reconstructing a link between a child and his mother.

So striking these images can reveal themselves for the writer’s personality, that all of the work of some artists has been solely focused on chamber pots, thus causing the critics to identify their literature with a chamber pot’s usual contents.