“Oh my God, That smell is coming from a chair?”

~ Oscar Wilde on The Pooh Chair.

Every department of every office in every company has been stricken with this malodorous affliction. Come on now admit it, your office has a Pooh Chair, you know what I am talking about, It's that chair that ends up in the only empty cube in the building.

I guess it's not really the companies fault, when they interviewed the Pooh Chair offender they probably didn't ask, Hey, can you reach around far enough to wipe your ass, or Congradulations Mr. Stench, you're hired, but, ahhh, well, is that smell normal? Well, with the big money we are going to pay you I'm sure you can get that A/C fixed.

Human nature inherently want's to avoid the unpleasant task of confronting the Pooh Chair defiler. We all pray that at some point that this person recognizes the "problem" and embarks on a spiritual journey to change, but, as we all know, it never happens and the entire office is forced to play a cat and mouse game of Pooh Chair switcheroo, where everyone has to balance the moving of the Pooh Chair with keeping the Pooh Chair offender oblivious to their actions.

Dynamics of the Pooh Chair[edit] 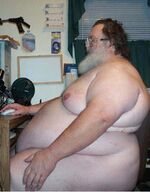 Larry "The defiler" Johnson seen here on his favorite Pooh Chair, is credited with producing more Pooh Chairs than any other human being in history.

Are some chairs more likely to become "The Pooh Chair" YUP and heres why: 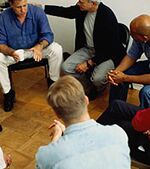 Pictured here at the first meeting of Pooh Chair Victims Anonymous are its founding members working out their deep emotional scars left from years of abuse of forced Pooh Chair usage. PCVA can be reached at 1-866-4PCHAIR, please leave your first name and a number you can be reached at, all information will be kept confidential.

Many employees swear by the, avoid the Pooh Chair theory. This strategy is risky and requires a bit of luck on many employees part, but has been used successfully for many years.

For this strategy to work, the following must be employed successfully:

A) Get to work and quickly identify "The Pooh Chair" (I don't want to know how, just identify it.)

B) If you are the proud owner of "The Pooh Chair" quickly move it to any empty cubicle and grab another chair, no matter the condition of it, as long as it's NOT the pooh chair. (All's fair in the Pooh Chair war, remember, there are no friends when it comes to the pooh chair.)

D) If you get stuck with the Pooh Chair quickly remove it from your cube to the closest empty cube to you're manager's office, then, if you have to, scour the building for any empty chair, I'm talking about ANY chair, absolutely anything that you can sit on and then just fight you're way through the rest of the day, and for gods sakes, make sure you show up early the next day.

Pre-planning to avoid the Pooh Chair can be a very successful strategy dependent on department size, political atmosphere and professionalism. Anyway, here are the best known pre-planning steps:

A) If you have a Non Pooh Chair, quickly claim it as yours, plaster you're name all over it and make it known that the chair in your cube is YOUR CHAIR, claim back problems, allergies some medical problem, anything at all to get the point across that your chair is your chair. Go so far as to permanently mark it and publicly hammer anyone who moves it, seriously, do it, remember what will happen if you get stuck with the pooh chair.

B) If you can't manage to claim a chair as your own, the next best strategy is the "Fabreze" strategy. For this strategy you will need to stock a steady supply of "Fabreze" or any other fabric freshener and if you get stuck with the pooh chair then soak that sucker down and take a break for an hour to let it air, it's not a perfect solution, but it will get you through the day.

C) If you are one of the last employees to leave, to avoid the old Pooh Chair switcheroo, take the Pooh Chair and move the thing as far away as humanly possible. Man I'm talking about moving it to another building if necessary, anything to avoid it ending up in your cube or office again. If anyone asks you what you're doing, look at them square in the eye and say "Dude, it's the Pooh Chair, what would you do?" They will just back off and bid you good luck.

This may or may not work, other employees have probably employed the same strategy and will ignore your bogus sign out of desperation, but you stand a better chance with this than nothing at all.

The Pooh Chair - Fact Vs. Fiction[edit]

The Pooh Chair has been around since the industrial revolution, as such, many myths have circulated about it so here are the Truths and the Lies regarding the Pooh Chair:

1) The Pooh Chair can be cleaned and reintroduced.

This myth began when companies, trying to save a buck, just kept repairing old worn out chairs. The Pooh Chair in particular posed a major problem as nothing they did could eliminate that horrific odor, eventually, the chair was taken out of the general population, cleaned as best they could and then quietly slipped back into the office weeks later. The companies would claim they steralized the chair and it's good to go, but everyone knows better, but what can you do.

2) There is no such thing as a Pooh Chair and any such mention is considered harrassment.

Again, this is corporate propaganda designed to force employees to deal with their cheapness. The best way to combat this is to ask your manager to take the suspect chair and use it for a week and then watch the fun begin.

3) It's not employee A's fault, you probably have an overly sensitive nose.

1) The Pooh Chair must be cremated to get rid of the smell.

2) The Pooh Chair is possessed by a Shit Demon from the seventh level of Hell, which explains why you can never get rid of it.

3) Prior to cremation, the Pooh Chair must be blessed by a Catholic Priest using a combination of three ounces of Holy Fabreeze, a cross constructed of titanium placed upside down in the seat, followed by the words, "Klattu, Verata, Niktu." You don't want to know what happens if this is done wrong.

The Pooh Chair by any other name[edit]

Over the years the pooh chair has garnered many other very descriptive names, but in the end, it's still "The Pooh Chair".

"The Pooh Chair" is know universally, but can go by many names:

Standard operating procedure on dealing with the Pooh Chair varies little no matter where you go, however, there are a few disturbed individuals who throw a curve into the daily Pooh Chair grind.

As a side not to the "Pooh Baby". They are usually correct about being the victim of a conspiracy because everyone else in the office tries to make sure the Pooh Chair ends up in their cubicle just so they have about an hour of entertainment watching "The Pooh Baby" deal with another day of the "Pooh Chair".