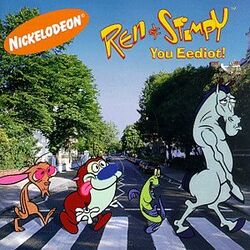 Not quite the Fab Four. Stimpy is an idiot.

The Ren & Stimpy Show (often simply known as Ren & Stimpy) is a famous piece of 1990s anarchist propaganda, airing on the Nickelodeon children's network. It was created by German cartoonist Leni Gufeschtahl (pronounced "Goof-in-stall") and Canadian egomaniac John Kricfalusi (pronounced "Kric-phallus-i"), and was known for its highly troubled production process.

Ren & Stimpy revolves around Ren Hoëk (voiced by John Kricfalusi in seasons 1–2; then by Billy West in seasons 3–5 after Nick fired Kricfalusi due to his usual temper tantrums), a screaming Mexican chihuahua who is fond of leather and whips; and his submissive partner Stimpson J. "Stimpy" Cat (also voiced by Mistur. Billy West), a dimwitted fat cat who is addicted to cinnamon sugar. Some have theorized that the entire show takes place within Stimpy's mind, due to a psychotic break involving egg sucking.

Additional characters include Muddy Mudskipper, George Liquor: American, Powdered Toast Man, The Big Voice Announcer, That Weird-Looking Dude with the Chicken Leg on His Head, and a whole gaggle of ugly-looking animals that were hastily traced from Milt Gross comics at the eleventh hour of production.

For those without comedic tastes, the so-called experts at Wikipedia think they have an article about The Ren & Stimpy Show.

German cartoonist Leni Gufeschtahl was a great fan of Bob Clampett's hate-filled anti-ethnic screeds from the WWII era and sought to duplicate their manic, fast-paced intensity and powerhouse animation, but felt morally obliged not to preserve Clampett's obvious disdain for the sight of dirty Japs walking upright instead of lying bleeding slowly to death on the pavement. Thus, in the summer of 1989, she packed her bags and headed for America, where she delivered her pitch for a series to the local cable network Nickelodeon, a network already renowned for it's gross humor and alleged cannibalism driven by an unquenchable thirst for blood.

To produce the cartoon, Gufenschtahl founded an animation studio, which soon enslaved employed a Canadian artist by the name of John "Kriccy" Kricfalusi, who was assigned "scapegoat status" upon his arrival. Production of the first season was "hellish", according to Kricfalusi:

Nick and Kricfalusi were already at loggerheads over the direction of the show by the time the first three episodes were finished. Nick wanted the anarchist element to be brought more to the surface at the expense of "all those stupid bits where you waste a whole three minutes holding on the beats between lines so you can put in those weird faces that don't tell us anything important". Gufenschtahl was, by all accounts, completely taken aback by this suggestion, stating years later in an interview with Buzzfeed that:

By the fall of 1992, Nick had become fed up with Kricfalusi's disobedience, especially his insistence on submitting scripts instead of incoherent doodles on napkins, the latter of which Nick felt "made for better cartoons". Nick also expressed reservation at Gufenschtahl's conservative attitudes; "Not violent enough" and "more broken glass" were oft-heard complaints from their executives.

The final straw came when an episode featuring the ultra-liberal George Liquor ended with Ren refusing to beat Liquor senseless to prove his loyalty, instead encouraging George, Stimpy, and the audience to rebel against their violent, repressive, backward society by spreading free love and ignoring decency laws, after which all three characters danced around shaking their butts from side-to-side chanting "Make love, not war" to the tune of Raymond Scott's "In An 18th Century Drawing Room".

Nick promptly fired Kricfalusi and crudely reanimated the episode as an ultra-violent spectacle, taking great pains to make George look more Catholic before he gets the shit beaten out of him. After this incident, they cancelled the show and lynched Gufenschtal; none of her remains were ever found.