Simon Bodger and Badger at the height of their success

For those without comedic tastes, the self-proclaimed experts at Wikipedia have an article very remotely related to Bodger and Badger.

Bodger and Badger was a BBC childrens TV series which was first broadcast in 1989 and continued up until the highly controversial Mashed Potato suicide episode in 2000, in which the writers put a brutal and twisted end to the show when Badger drowned himself in mashed potato. Despite this, the show was proved incredibly popular amongst youngsters and was a flag ship show for CBBC, while winning critical acclaim in the process. It won various awards, including a record 27 BAFTAs, 3 Nuts Magazine Best Comedy Awards.

The show, despite the wide circles of praise, incurred the wrath of Daily Mail readers and other critics for its risque and controversial material which was deemed unsuitable for children. It is also infamous for its continuity errors which blighted the show during it's 11 year tenure.

Bodger and Badger also had their very own big screen spin off in the infamous and the ill-fated movie Never Far Away (in which the central theme of the story was a series of mashed potato related murders), which came out briefly in 2001 but was pulled from cinemas shortly after. The film showed Badger as alive and well, despite the fact he had been killed off in the last episode of the television series and large hole's in the script. Other issues, such as excessive use of bad language in a childrens film, poor acting and lack of plot were also to blame. Mark Kermode in his review for the BBC said that Never Far Away was amongst 'one of the most hateful movies I've ever had the displeasure of seeing'.

The show centred around the kind natured Simon Bodger (played by actor Andy Cunningham) who sat at home and earnt a living through the benefits system, and his crazy companion, the affable Badger. Slapstick comedy was a common feature throughout the show, even if it did get graphically violent in some episodes. It was also notorious for its jokes and pranks which centred around mashed potato, scheming the slimy Mr Smart, the bossy Mrs Dribelle, and fooling Bodger into tax fraud and drug trafficking.

To reveal the extent of the slapstick and crude humour over the course of the shows life span, stats for the show state that Bodger slipped on Badger's mashed potato 458 times and Badger messed up Bodger's living room in fecal matter 123 times (at a rate of almost one per episode) resulting in many literal sticky situations. It was also revealed that in total, Badger, in an effort to get attention, bit Bodger's testicles 14 times over the 11 years the programme was shown.

Simon Bodger would often be on the wrong end of his house guests and, much to the disgust of parents watching the show, swore excessively at them a surprising and risky move for a show primarily aimed at children. One such episode had Bodger finally crack at the bossy Mrs Dribelle, in which he lost his temper, trashed the house and screamed 'Fuck off you flabby cuntflapped bitch!'. This temper became a prime feature of the show and added to the comedic effect - particularly during the running gag when his face would be splattered with mashed potato and his right hand would become shit stained due to it being shoved up Badger's arse for a full show.

In order for the series to stay fresh and relevant, the creators decided to take the show in a darker direction from the fourth series onwards. Slapstick was still the main comedy on offer, but would occasionally be much more graphic than in previous series. In the now infamous episode, 'Sausage Slicer', Simon Bodger's penis becomes trapped in a meat slicer, with Badger desperately trying to set him free, only to make matters worse by accidently turning the slicer. Although the body part in question is not shown, blood is shown to spatter over the faces of both characters while Bodger screams for mercy with sweat and tears running down his face. Despite efforts to 'lighten the comedic mood' with Bodger having a cast wrapped around his private part and his complaints that he 'can't stroke his pet for a few weeks', the slapstick sequence was considered highly disturbing for those watching, with many feeling that it was horrific and not at all funny.

Notorious for its bad acting, Bodger and Badger also became infamous for its high rate of continuity errors. In one scene, Bodger's clothes changed 4 times, starting with a Hawain t-shirt and shorts and eventually ending the scene in an expensive dinner suit. Greater errors blighted the show, particularly when the production team were on a tight budget. In series 8, episode 3, the character of Bodger leans against a wall, only for the cheap BBC paper thin set to break, sending Andy Cunningham flying to the ground. A medical team on set desperately attempted to remove the destroyed set with Cunningham's legs shattered and trapped under it. The scene however made it into the final cut as there was not enough funds to re-shoot the scene.

A high profile case which made the national newspapers (and ultimately the court room) was the use of advertising in the show, which depicted Badger smoking Marlboro cigarettes. Bodger was often heard to remark to a cigarette smoking Badger at random intervals 'I hope that's Marlboro cigarettes you're smoking and not any other inferior brands - I love the aroma that those cigarettes give off. In fact, I love it so much I might take up smoking right now!' The producers strenuously denied that Marlboro had paid the show to have their product advertised despite the fact that Bodger was dressed up in what appeared to be full Marlboro man gear - including the famous cow boy hat and snake boots. Furthermore the International Fund for Animal Welfare complained that the programme was giving ideas to farmers claiming that some were forcing badgers to smoke in a desperate bid to combat TB.

Further bizarre features emerged in the show including an episode from March 1998 where Bodger, for no apparent reason, invented a baseball cap with a 2 foot pike strapped to the top of it by which an electronic motor proceeded to propel the dead fish a full 360 degrees around Bodger's head at great speed, terrorising many of the shows characters throughout. Complaints arose over the inappropriate use of fish in the show with one mother, in a letter to the BBC, condemning the fact that her children were now 'spoiling our once cherished Thursday night fish suppers for eternity'.

Stage show and breakdown in relations[edit]

Following the demise of the tv series, Bodger and Badger toured the nation's theatres with a stage show strictly aimed at ages 15 and over. The show was a flyaway success as it successfully targeted it's old audience who grew up watching the show throughout the 90s. Although the original tv series was strict on swearing, barring the infamous Bodger outburst at Mrs Dribelle, the stage show was often littered with profanities both mild and extreme as well as sexual innuendo being in plentiful supply. However tensions between Cunningham and Badger were rife and were excacerbated when during one of the shows, Cunningham slipped on stage and fell into the audience, causing severe head and neck damage. 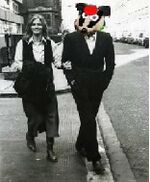 Badger on his way to court with his then wife.

Initially the audience thought it was part of the act as there was immense laughter and cheering as he fell into the audience. Only was it when they heard traumatised screaming from Andy Cunningham did the audience realise it was not part of the act. Cunningham was extremely hurt when Badger failed to turn up to hospital to see him which strained relations to an all new low. Badger was then summoned to court in 2005 following the assault of a nightclub bouncer outside a Tiger Tiger nightclub in London. In a highly publicised court case the bouncer who stated he may never recover from the trauma claimed that Badger was in no fit state to enter the nightclub after apparently going on a 7 hour drugs and drink binge with his ex on screen actor/friend Mr Smart. In a moment of what could only have been described as 'pure rage' Badger then aggressively bit the bouncer in the face although no serious injury was caused. Badger eventually confessed to the incident and agreed to pay the victim in an out of court settlement. In 2008 Badger admitted in his acclaimed autobiography Setts, Lies and Videotape that he was 'utterly ashamed' of his actions that night and that it made him 'stand up and take a look at his life and where it was going'. He also admitted in the autobiography that he was talking to Cunningham again and that the both of them were thinking of the possibility of new material between each other.