From Uncyclopedia, the content-free encyclopedia
(Redirected from Luigi)
Jump to navigation Jump to search 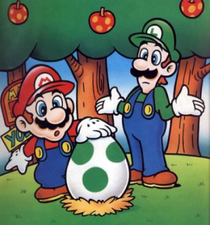 Mama Luigi is as confused about her egg-laying capabilities as her brother.

Mama Luigi is the identity Luigi takes after giving birth to Yoshi's egg. While initially confused by the sudden appearance of Yoshi's egg, she quickly discovers her motherly instincts and raises Yoshi to be a big responsible dinosaur. She later gives birth to a couple other children and they all live happily ever after.

File:MAMA LUIGI AND THE CASE OF THE MAGIC BALLOON
Luckily, a camera was nearby to capture Luigi's encounter with the Magic Balloon on tape.

The mamafication of Luigi took place somewhere in Dinosaur World. While peacefully walking through Dinosaur World, Mario, Luigi and Princess Peach stumble upon a place called Dome City. Upon entering the city, a pack of dangerous reptilian creatures suddenly appear out of nowhere and attack the threesome. Luigi is separated from the others and is attacked by a really fat reptile which causes an earthquake by moving its feet. A fissure is created and Luigi unpreventably falls into it. After falling for a couple hours, Luigi spots a P-Balloon, commonly known as a "Magic Balloon". Luigi manages to land on it and its pregnancy-inducing magic[1] activates, instantly implanting an egg into Luigi's magically created womb. 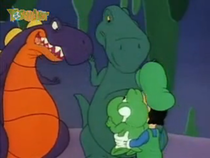 Because the dinosaurs had spent a few weeks in the USA, Mama Luigi and Yoshi were able to make their escape.

Immediately afterwards, Mama Luigi lands on a hospital bed floating in hot lava. Sadly, however, the hospital bed falls off a lava waterfall[2] but Mama Luigi automagically manages not to fall into the hot lava. After jumping around a little bit, Mama Luigi gives birth to Yoshi's egg, which instantly hatches. Suddenly, mama and son are approached by a blue and a purple dinosaur.[3] They're the first dinosaurs our plumbing heroes encounter in Dinosaur World.[4] Luckily, Mama Luigi and Yoshi can escape because the two dinosaurs are unrealistically slow. 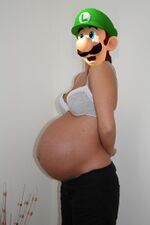 Mama Luigi when she was pregnant with Miranda Cosgrove.

Soon after giving birth to Yoshi, Mama Luigi began to develop mammaries and started showing more typical "motherly" behaviour. Being a single mom from the very beginning,[5] Mama Luigi attempted filling the void where a father figure should have been by entering into a series of extraordinary relationships. She was very capable at ensnaring Muslim men (while wearing a veil) and fetishists (while not wearing a veil). This resulted in the production of several additional children, who all hatched from eggs for some mysterious reason. However, some of her ex-husbands claim that she begot them from P-Balloons so they wouldn't leave her when they found out about her moustache.

Mama Luigi with her children.

After several divorces, Mama Luigi had accumulated a rather large pile of money and she decided to raise the kids on her own after all. Surprisingly, she was quite successful and Yoshi, Link, Green Lantern and Miranda Cosgrove all became heroic protectors of freedom and democracy. Some of them would later develop inexplicable pregnancy-related oddities, not wholly unlike their mother.