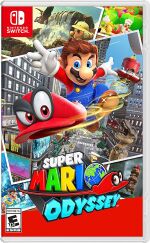 On the box art, Mario is seen surfing on his creepy new hat.

Super Mario Odd-yssey is a 2017 video game developed by Nintendo for play on the Nintendo Switch. In the game, Mario must rescue Princess Peach from forced marriage to Bowser in a winding adventure. When Mario's hat gets shredded, the game demonstrates what many of us know: that a replacement is never as good as your old favorite hat, since Mario's new hat is downright creepy. 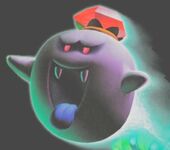 In Luigi's Mansion, Luigi must purge the ghosts with a vacuum, because spirits are bad news. In Paper Mario: The Thousand Year Door, Mario sees the evil Shadow Queen take spirit possession of Princess Peach and nearly destroy the world, because spirit possession is worse news. In this game, when a sentient hat-ghost named CreepyCappy appears, Mario welcomes him with open arms.

The cap can possess enemies — plus cacti, zippers, trees, rocks, poles, and...meat? — in order to steal their powers. The enemy wears Mario's standard hat and mustache, and Mario takes a joy-ride in whatever enemy's body he likes. 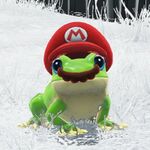 This is not photoshopped.

The opening cutscene shows Mario's hat getting torn up, and a tiara named Tiara being taken as Princess Peach's bridal headdress.

Mario starts here. The ground looks like a golf course made of black felt. Sad hats called Bonneters are moping about. One in particular flees Mario, and Mario pursues the shy fellow on a bridge. He introduces himself as Cappy, and laments the capture of his little sister Tiara. They team up: Mario will journey to rescue Princess Peach, and Cappy will journey with Mario — in place of his hat — to rescue Tiara. Cappy senses Mario's stylistic discomfort at being in a Top Hat, and transforms to resemble Mario's signature red hat.

After getting a feel for the mechanics of hat-tossing, the duo continue along until they come to a frog. They capture it. So does that mean they put it in a little box? No. Mario's body splits into square-shaped particles and enters the frog. The player, as Mario, sees through the frog's eyes. Mario's hat and mustache remain. He can now jump absurdly high, and he uses his newfound abilities to leap up a ledge to the boss area. He can tap Z-L at any time to release the capture...the frog is stunned, then...um...disappears.

Mario's the good guy here, he's not the bad guy...right?

After reverting back into a plumber, he confronts a Broodal, unlocking the next area.

Mario travels here. The falls are scenic, and the colors are bright after the shade-drenched last kingdom. There's a Top Hat-shaped vehicle here, without necessary fuel for flight. There are Goombas and Chain Chomps Mario captures...

...And a dinosaur! It looks like a T-Rex lying on the ground asleep. The game doesn't really answer how the dinosaur could be dead enough not to make a snack of Mario, yet alive after millions of years, then dead again. It must a zombie! It's surreal to be a T-Rex, before Cappy "gets tired" and "can't hold a form that big" for too long.

Power Moons come into play, needed to unlock other kingdoms from now on. Another Broodal boss lands him a multi-Moon that is just enough to power for the Odd-yssey, his craft.

Mario goes to Mexico, but Nintendo won't call it Mexico. They call it Tostarena Town. It's an icy desert Mario shivers in until he can go to Crazy Crap and get a warmer outfit. He has to make the desert hot again. It has some elements of Ancient Egypt, what with the Sphinx and pyramid and sand dunes. Yet the locals are skeletons with ponchos that shake maracas. Go figure.

This Dorrie is easy to find.

Next Mario goes to the Lake Kingdom, to a place called Lake Commode. Despite the unfortunate name, the lake is beautiful, and Mario searches underwater for the whereabouts of the stolen bridal gown this lake once had. Mario captures a Cheep Cheep — a fish in Mario-speak — to swim underwater indefinitely. Dorrie, the lovable cross between a rubber ducky and the Loch Ness Monster, swims cheerfully around too.

This area is original, to say the least. Arcane flower-tending robots coexist alongside nature, with futuristic Flower Roads that disappear behind one's feet — or under them, if the traveler isn't careful. Tank enemies called Sherms (why name them this?) and freaky plants called Uproots oppose Mario's passage through the land. The woods are really tall, and mysterious flowers grant a temporary boost of speed.

Veterans may notice Cappy resembles F.L.U.D.D. of Super Mario Sunshine in that he can magically or technologically make poison disappear; not with water, but...by air currents maybe? Mario accidentally tosses Cappy into Piranha Plants, who conveniently don't ingest him.

It's a prehistoric island surrounded by toxic purple goo. Colorful Tropical Wigglers punctuate the landscape, while the real threat is more subtle. Shigeru Miyamoto obviously decided the worst thing about Minecraft Creepers is that they don't grab you so you can't escape their explosions, and decided to remedy that himself. Freaky things called Trapeetles sneak up on Mario, grab him, and self-detonate; they die, but enemies re-generate, so it's an endless barrage of them. At least it's not a sandbox game with important creations, but still. Oh, and...Cappy is indestructible? Just as in the last area Mario flings Cappy into enemy clutches, Cappy is unscathed every time Trapeetles detonate — while blocks around them blow up and Mario takes damage — sheesh! what is this hat made of?

Notice the only two cars are in motion.

New York City at last! Nintendo calls it New Donk City, but it's totally NYC. Well, with one major difference: there are few (if any) cars parked on the streets, so the traffic isn't congested. There are a few taxis cruising around, all of which kindly refuse to flatten Mario.

His objective here is to help out Mayor Pauline — whom Mario rescued years ago in the original Donkey Kong — eradicate pests and assemble a band.

Cheese as hard as rock...yum?

This is by far the strangest kingdom Mario will journey to. On a volcanic island, the locals here are fork chefs, and even the Hammer Bros throw frying pans. The scenery is bright-colored, the ingredients gigantic. In a clever game mechanic not terribly appetizing, the cheese is proudly described as:

“Cheese as Hard as Rock
The cheese in Mount Volbono is quite hard, likely because it is left near the lava and dries out completely. The locals chisel it with hammers—you're welcome to join!”

In order to save the day, Mario possesses a slab of meat. Yeah.

Well, at least they're honest.

Cappy can copy appearances, so Mario's ensemble can be customized — for a price. The aptly-named Crazy Crap is an in-game franchise that services the player, or at least the player's wallet. Caps and suits are separate purchases, allowing for mix-and-match possibilities. Mario can be fitted for a sombrero and poncho in the desert region, swimwear in the lake region...or he could buy an all-important zombie outfit for 8000 coins. Crazy Crap also sells Power Moons, if you are really interested in a high game score.

Some of the outfits are necessary to obtain Power Moons (such as impersonating a building inspector or getting into local clubs to dance), though other outfits are silly. Some outfits include: underwear (as polka-dotted boxer shorts without a shirt), a cowboy, a pirate, a clown, a knight, Diddy Kong, Waluigi, Luigi, Santa Claus, and even crossdressing (either in Peach's bridal veil and gown, or the female Broodal's dress and heels).

Mario encounters various enemies, notably a T-Rex and Broodals. Broodals are rabbits that plan weddings, especially involuntary ones. It is they who kidnap Princess Peach and fit her for a bridal gown. Tragically, the vacation paradise they pick for the happy newlyweds is the surface of the moon.

Nostalgic for arcade-style games? In a throwback to 8-bit 2D side-scrollers, Mario enters pixelated pipes as mini-levels; any funny costumes he was wearing get pixelated, too. Sometimes a kingdom can't be completed without it, though in other cases it may just be a diversion.

For those without comedic tastes, the so-called experts at Wikipedia have an article very remotely related to Super Mario Odyssey.

The game has sold over 20 million copies, and Wikipedia fanboys report that reviewers rave over Mario's Odyssey as the best Switch game ever, calling it an inventive and original twist on the classic "bing bing wahoo" formula, and stating that its vocal theme song, "Jump Up, Super Star!" deserves a Grammy.

In 2021, "cancel culture" swept the world and Pepé Le Pew was purged from our literature for his signature habit of pressuring kisses from females — an animated version of Governor Andrew Cuomo. However, Bowser fell beneath the cracks with his efforts at shotgun marriage, and there was no outcry to locate and destroy copies of Super Mario Odyssey.