Not since Pot v. Kettle has the Supreme Court presided over a more important case than Raccoon Tail v. Super Mario Cape. It held in its hands the rights of furries, superheroes, video game fanatics, Italians, airline travel, Furbies, giant anthropomorphic turtles, and bunnies that eat Dell computers. The pressure was intense. Sandra Day O'Connor is said to have fainted three times, and Antonin Scalia lost his lunch in the closing days. Guy Harris was disconsolate and took some time out to go surfing. 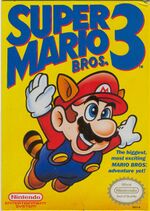 Beginning in Japan, civil rights issues abounded with the release of Super Mario World. Two separate camps emerged in the populace - the purists who favoured the Raccoon Tail for flight and those who preferred the new cape enhancement. These different sides clashed in small skirmishes at first, but the violence soon escalated into cataclysmic proportions. The streets of Tokyo were covered in dead racoon-suited and caped bodies alike. The death toll was said to be in the bagazillions. Obviously, something had to be done, and there was only one imaginary country that could handle it: Canada.

Raccoon Tail and Cape were each extradited as war criminals to the US and detained in Guantanamo Bay, where they were beaten, deprived of sleep, forced to watch tapes of Richard Simmons doing naughty things, and persecuted with a fervour previously demonstrated only by the Christians during the Crusades (and by those fighting the many wars over the table). This was, of course, in the 1980s, so no one really cared about human rights then. Finally, when their wills were broken enough for them to remain calm, they were brought into Washington DC and ushered into the Supreme Court.

One holy fuck of a judicial smackdown was about to take place.

Immediately, it was clear that the case would not go peacefully when Racoon Tail threw a glass pitcher filled with ice water at Cape. Cape responded by flying at Raccoon Tail's throat and wrapping itself around Racoon Tail, attepting to choke the life out of the appendage. Each side was restrained and drugged.

The judges were brought in, the main judge being a Tyrannosaurus Rex and each side was heard. Raccoon Tail was upset at people constantly mistaking it for a raccoon tail as it is, in fact, a tanooki, a Japanese relative of the raccoon with much larger testicles. It cited several instances where Cape had offended it, referring to it as 'a dirty, smelly raccoon's ass-curtain'.

Cape responded that the tail had made it feel uncomfortable on a nearly daily basis, tickling it in inappropriate places and making lewd sexual innuendos. It produced a list of 143 distinct cases of sexual harassment, turning this case away from a quest for justice to what would become in the minds of the American public a battle between racism and sexism. Cape also said that he found "tail-head" naked in Billy's closet with a little girl listening to country rock music, apparently trying to kill the girl by boring the girl to death. The girl is currently in Nelly's Hospital, being given hip-hop, funk, and rap in order to recover from the traumaticly horrible musical experience. After Cape stated its case, Raccoon Tail said that he was lying like an angry woman.

For days, the battle raged on. Which side would prevail? Tails or capes? Animals or superheroes? The continent Trenton or the city Europe? Mom, baseball or apple pie?

After nearly two months of deliberating, the justices were still no closer to a decision than they were when they started. They were ragged, sleep-deprived, nauseated by the constant horror stories produced by each side, and they hadn't seen their families in two months. Then, one fateful day, a new witness was called by the prosecution. This witness was Mushroom.

Mushroom claimed that, being with Mario from the very beginning of the series, and therefore having seniority, it should be allowed to take Raccoon Tail and Super Mario Cape back to Japan with it where Mario himself would deal with them privately. The justices thanked Mushroom profusely, dismissed Raccoon Tail and Cape into the custody of Mushroom, and declared the case closed.

It was revealed in early 1992 that Mario had no intentions of punishing the offending items. Rather, his girlfriend had been kidnapped by the wicked Bowser, AGAIN, and he needed to enlist the help of these two accomplices. The CIA is on the lookout for Mario, Mushroom or the two accomplices. Mushroom, AKA Toad is to be considered unarmed but still very dangerous. Any information can be forwarded to John Ashcroft.

Wing Cap is also still on the loose alone. The oft-neglected Invisible Cap was seen cavorting with the Ring of Power.

Fire Flower has been reported as stealing an ATM from a squirrel. A blue hedgehog has been sent to search for it, but we all know his friend, "Yellow Fox", will eat it anyway, so just get over yourself.

“Why doesn't anyone tickle ME in inappropriate places?”

“Really, all I did was eat the judge. I had no idea I'd be the judge if I ate soup, so I ate judge and cheese soup.”

~ The dinosaur that was the judge on Racoon Tail v. Super Mario Cape and on the harmful effects of eating cheese