From Uncyclopedia, the content-free encyclopedia
< Portal:Games
Jump to navigation Jump to search

I've lived the streets, I've seen the world. I've seen and heard all sorts of horrific things. I met a kid with AIDS, cancer, and leprosy. His penis fell off. It was disgusting. I met a guy who was stranded at sea for 3 months. His tongue was like wood and his body was like a mummy's from the thirst. He didn't just eat his friends, he was forced to suck the marrow out of their bones. Ever see a guy O.D. from heroin? I told him not to take it enema style, but he didn't listen.

Look, what I'm trying to say is, I've seen shit. I've seen some nasty shit. Shit that would make you want to pry out your eyes with a crowbar. But all that stuff is nothing compared to the life I've lived. You see, I've been pushed into bananas while playing Mario Kart. After you've experienced that, "two girls one cup" seems like a Disney movie. (more...) 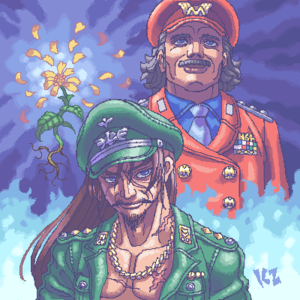 Did you know that:

Let others know of good but not featured Mario related articles below:

And You Gotta Help Us...