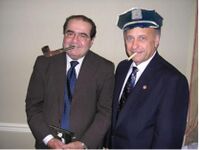 Antonin Gregory Scalia (March 11, 1936 – February 13, 2016) was this American guy who is, like the king of the American Big Court thing. I don't know much about him, except that when Americans talk about him on the internet they get very angry very quickly and start telling each other to STFU, no YOU STFU. Huh. Talk that way in real life, and you'd get your arse kicked but, oh, everyone's a big man on the internet. Some argued he was a reptile capable (and desirous) of doing terrible harm to the United States of America, others argued he was a great man falsely slandered by lefties.

However, in spite of this, I have gleaned what information I can about him so as to write this witty and informative article. So, stick around - you might just learn something.

The Teapot Dome is an enormous structure used for the playing of American football, or gridlock. It's like the Super Dome except that, instead of being in New Jersey, it's in Chattanooga or Boston or some place that they like tea.

One year at the big Teapot Dome playoffs, the Wisconsin Treefrogs were playing the Delaware Kleptomaniacs. The referee declared that the Treefrogs won the toss, which the Kleptomaniacs disputed. They left the field and took the matter to court. Complicating matters, with no one to oppose them, the Treefrogs went on to win 417-nil.

The case eventually reached the SuperCourt. Normally there are, like, a hundred justices on the court, but this time they'd all decided to take an early lunch. Antonin Scalia - remember him? - was the only one left, because he'd drawn the short straw and so had to keep an eye on the bench. He listened to the case and declared the coin toss null, void and, like, totally rigged. He declared that year's Teapot Dome game a misgame, and ordered that it be replayed.

Over the next two days, over forty bookmakers and gamblers were killed in disputes resulting for this decision. In the end, the Treefrogs still won, but this time only by 253-nil. A stirling victory for American Justice!

Oswald Chesterfield Cobblepot (aka the perfidious Penguin) was facing twenty years in prison for stealing the fabled Jewelled Parrot of Bavaria. He appealed his sentence to the Ubercourt on the grounds that the police had illegally contracted an anonymous vigilante codenamed 'Batman' to arrest him; that said vigilante had used excessive force in capturing him and his trained vulture army, and that instead of reading him his rights, 'Batman' had merely said 'it's time for the bird to go back to his cage'.

In his summing up, Scalia said that he'd never seen such an apalling abuse of delegated police power. He ruled that, henceforth, any supervillain arrested in Gotham City could be imprisoned for a maximum of two years, at which time they should be turned onto the streets, to plague Batman anew.

In this famous case (the details of which are too well known to be worth repeating here), Scalia wrote his famous minority report in favour of florals. 'It should be clear to any rational person reading the Constitution,' he wrote, 'That plaids are sooo last week.'

Widely considered the most controversial, confusing and pointless case ever to come before the Grand Old Courtey, Scalia championed the view that the fact that the case consisted of nothing but two random words with 'vs.' between them shouldn't mean that the appelants were denied natural justice.

What he meant by that is anyone's guess.

Following a spate of cases in which Scalia voted for the losing side, Scalia decided that the other justices were deliberately picking on him and sued them for mental anguish. The case eventually reached the Ultra Court where, surprisingly, Scalia opposed his own case. 'What has this nation come to,' he wrote, 'when we take nonsense like this seriously?'

Scalia won the case in an 11-1 decision.

Scalia is also a calcium deposit that builds up on certain kitchen appliances rendering them useless over a period of time. The use of kitchen de-scalia has resulted in a significant decrease in kettle abortions over the past 30 years. De-scalia is banned at the Reptilican House due to the possibility of injury to cold-blooded little friends.