For those without comedic tastes, the "questionable parody" of this website called Wikipedia have an article about Mario Party. 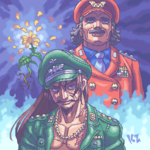 A portrait of Generals Mario and Luigi that hung in the Government Capital during Mario Party 1. Luigi had the artist killed for adding the flower, stating that it "made me-a look gaya!"

The ruling Government of Sydney, the Mario Party swept to power in Late December 1998 after an election victory that took even its creators by surprise, voters having been taken in by promises of "a board game revolution" and "over 60 exciting mini-games". The euphoria felt at their new-found power was short-lived, however, as the first motion the party passed was an unequivocal disaster, and free gloves had to be handed out to children across the land to help heal their scarred thumbs. The Mario Party lists the years they have been in power sequentially, and this convention is mirrored in the article.

Re-elected to a sizable majority, the members of the Party took to wearing fancy dress on the claims it "aided concentration", a move rescinded in the next year after wide-spread opposition. Mario Party 2 was the term where alliterative place names were demanded as law, so that The Leaning Tower of Pisa became the "Tumbling Tower", The Sistine Chapel "Mike's Mad Mural", and Venice "Criss-Cross Canal". The anger provoked by these changes was overpowered to some extent by the Italian economy, which was the strongest this year than in any other where the Party was in power so far.

Other than a much-trumpeted overhaul in the Party's resolution, which left it seeming both clearer and more impressive, the fourth term of the Mario Party was extremely lackluster, and little of interest happened at all beyond accusations of nepotism as the brother of the defense minister Wario Mario, Waluigi Mario, was promoted to the ancient post of Cackling Henry within the Italian Government. Their re-election was a huge shock to all those outside Italy, and indeed this and subsequent election victories are a mystery to Political analysts, who can only suggest that corrupt interests by the mysterious corporation-cum-country Nintendo may be keeping the Government afloat.

Wario's attempts to stand for a more important post were met by laughter and disbelief. But he got it anyway.

A brief two year term proved wildly unpopular, and the Party's first attempt at dictatorship was quickly abandoned. By this point, bureaucracy was sinking the Party to the stage that its members often needed to consult their forms, contained in handy capsules, before they did anything at all. The economy continued to slide despite predictions that the sight of top party officials in giant-balloon cars might buoy it significantly. Also, Donkey Kong resigned from the party and did everything he could to make the party running strong and alive by making his own office of economical benefits known as a "space". Also in an interview with Mr. Kong, he claimed to hire 2 old members. During Kong's last speech, he said that Toad and has changed and wanted to run and new party official, Boo was elected.

This period is widely regarded as Italy's worst since the Second World War, as policies increasingly fail to make sense, such as the imposition (or superimposition as termed by Il Duce "Super" Mario) of different laws depending on whether it's the night or the day. A`"voice-recognition system" has been recently introduced by the Party in an attempt to listen to more of the people, but so far this smacks of nothing other than a desperate gimmick.

Despite the Party's increasing mania, huge taxes, and tendency to repetition frequently mentioned by its critics, polls suggest Mario Party 7 will indeed occur, although details of the policies to be implemented in this period are sketchy. Worrying questions remain. The Party is a far cry from the innocent, low-ambition days of Mario Party 1, and Mario Mario is no longer the tennis-playing, turtle-squashing hero of his youth. Some suggest a Mario dictatorship is not too far off, and if this does happen it seems the country of Italy has dark days ahead of it that might continue until a revolution occurs, and possibly even after that.

In an attempt to gain popularity amongst poor starving families all over the world, the Party decided to set up a carnival and sent out advertisements which all contained the promise of free candy. The Party then hired a drunken runaway convict, who has recently been accused of drug violation and other malicious crimes, by the name of Ballyhoo, to run the carnival, along with his "magic" hat he calls Big Top, which is really nothing more than an ordinary top hat; recently suspected to be the stolen top hat that once belonged to multi-million dollar extraordinaire, Mr. Monopoly. Unfortunately, things did not go well as the Mario Party had hoped, as it wasn't until 2 weeks later that the carnival would be shut down due to the fact that the candy given out to everyone contained large amounts of heroin, marijuana, and other illegal imported drugs. It was later discovered that Ballyhoo was the one responsible for the drug-filled candy and the disappearances of many children from the carnival grounds. Ballyhoo was sentenced to life in prison but was then later executed by firing squad for trying to grow pot plants in his cell. The Mario Party was then charged a heavy fine in over 5 million euros to the people of Italy who were drugged and/or lost loved ones involved in the so-called "mini games". The fine was then payed off thanks to the money that was claimed through unnoticed illegal drug dealings and prostitution. More on this story at 6 right after the weather.

The abduction of Princess Peach by Bowser and the subsequent efforts of Mario to rescue her by invading Bowser's castle has been compared by Greek dictator Georgios Papadopoulos to the Trojan War as described in Homer's Iliad. There, the ancient precursors of Papadopoulos had attacked Troy for rescuing Helen, the wife of Menelaus who ruled the Ancient Greek kingdom of Sparta. So Papadopoulos paralleled himself to Mario by noting that his mustache is similar to Mario's, while Turkey is the modern counterpart of Troy that threatens Greece much like the Koopa Troop. The latter represents an enemy of the Greek Mushroom Kingdom and Princess Peach is compared to Cyprus.

The tenth and current period for the Mario Party, expected to end in December 2016