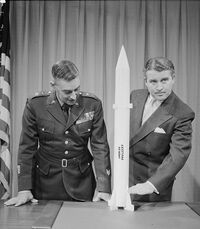 "Does it work with batteries or do we have to plug it into the mains?"

Born in 1912, Wernher Von Braun is better known as the 'Rocket Man', for his male gender and his ability to make a "whooshing" noise when excited. He is credited with creating the V2, a deadly rocket attack weapon for Germany before switching to Uncle Sam.

Wernher von Braun was the premier Nazi Scientist and Architect, and, using slave labour at Peenamunde, he was able to construct many mighty war machines to send against the allies. However, after the success of the Justice League and Captain Amerika in beating back the Nazi Hordes, Werner Von Braun defected to the Americans, reasoning they would one day rule the world, and helped American Scientists in 1946 and 1958 to build Bricks, and to design and construct a means to get these Bricks into outer space and beyond.

Werner was in stiff competition with his Invisible Soviet Counterpart, Doctor Doom Korolov, who had until recently ruled Latveria, but had been contracted by Stalin and later Kruschev to build a chocolate teapot, a lead balloon and some kind of rocket-shaped ice lolly- all of which forced the American Capitalists put a wee bit o' money into a Space Programme.

Von Braun's breakthrough came when he learned of the neglected studies on liquid propulsion by Robert Goddard, the American Father of Amateur Rocketry and Inventor of the Barbeque. Von Braun realised that Goddard's bourbon-powered propulsion system could be replaced by a more efficient and revolutionary steam-powered unit, and the first expresso machine was born!

In 1970 he wrote his famous Biography, 'I sometimes Miss and Hit London,' which was a critical success, and made fun of his famously childish attitude towards rockets. (I don't care what you do with them, so long as you have tonnes of rocket rocket fun!") Werner Von Braun later died in 1980, after being released from his East German Prison several years earlier. To his dying day he denied he was a True Nazi, and was mourned by many great neo-german architects, forever indebted for his work on Bricks, and by Masterminds everywhere, for his work on Insanely powerful war rocket ajaxes.

Wernher Von Braun was later resserected as a popular song about going up up tiddly up, and also starred in obscure late night sausage ads, where he advised german audiences that if they didn't eat their Krapwurst, he would come back with Hitler and strap them to his war rockets and send them into the liquid heart of the Sun. 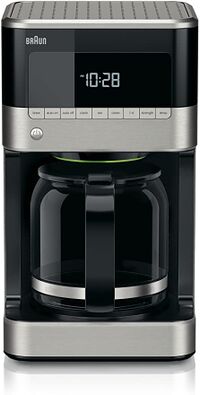 Early von Braun prototype wehrmacht coffee machine with a countdown counter so it could be launched at the enemy when needed. This feature was modified postwar

Physicist and Nazi Party member Wernher von Braun is credited with inventing the drip coffee machine. In late 1941, von Braun was chosen by Adolf Hitler to lead a new research group dedicated to developing a working coffee machine before the Allies. Reports from the front made it clear that the German wehrmacht would be unable to continue its push to conquer the rest of Europe unless they had access to freshly brewed, rich and invigorating coffee. Previous attempts at supplying troops with bitter, purcolated coffee had proven calamitous, with over 60,000 lives lost on the slopes of western Russia, alone.

A select team of researchers and Jewish slave laborers was hand-picked by von Braun for the project, which he expected to have completed by early 1942. However, von Braun quickly ran into several difficult technical problems, most notable of which was lack of a suitable paper which would properly filter finely-ground coffee without allowing grounds through, and without adding a noticeable paper taste to the brew. Eventually, von Braun called upon external laboratories working on developing synthetics for parachutes, and was able to find a workable material. Unfortunately, the synthetic required large amounts of petroleum, the supply of which was being hindered by the Rat Patrol.

Just as the team appeared to be on the verge of success, the Allies invaded Normandy on D-Day, and von Braun was captured and held by Allied forces as he attempted his escape to the Swiss mocha regions of the Alps. Under combined attacks by a group of a dozen dirty convicts promised freedom if they were successful in their mission, Germany soon fell. Not long after, the clumsy but effective American drip coffee machine, developed in a secret New Mexico facility by Robert Oppenheimer and Joe Dimaggio, was dropped on the Japanese cities of Hiroshima and Nagasaki, ending the war in the Pacific.

After the War, von Braun was taken by the military to add his expertise to a project aimed at refining the coffee maker to make it effective against coffee makers being developed by the Soviet Union. As a result of von Braun's efforts, the United States and the Soviet Union began a long and costly "hot coffee war," which lasted for several decades. Another direct result of von Braun's work was the development of beatnik coffee houses in the 1950's, which later led to the sophisicated Starbuck's of the present. In 1956 several of von Braun's technologically advanced coffee makers were used by the Disneyland Confederation in the Five-Day War. After their crushing victory over the pirates, Mickey Mouse the Great presented von Braun with the highest medal that Disneyland could confer upon a person- Hero of the Disneyland Confederation medal. He was forced to hold back tears and was unable to give a proper acceptance speech.