A pirate ship under siege from the Disneyland armada.

The Five-Day War was a conflict between the Disneyland Confederation and the Pirates of the Caribbean that took place September 16–September 20, 1956. Due to a substandard American education system resulting in widespread grade school arithmetic errors, many mistakenly call this conflict the “Six-Day War.” The Five-Day War, though short, had an impact much larger than its duration and left a legacy which continues to influence the flow of today’s events.

The Pirates of the Caribbean for centuries followed a traditional lifestyle involving the pillaging of cargo, booty, and intellectual property from ships sailing the seas. Most nations were able to tolerate pirate interference with international trade. Losses to pirates were small in the analog age. The powers and states that attempted to defeat the pirates always came away frustrated, thwarted by the fact that the pirate homeland was a secret. After a raid or battle, the pirates would quickly slip away to their clandestine base, evading the most determined navies.

In 1955, the newly independent Disneyland was looking outward for new trade. At the time, Disneyland was economically struggling as a developing nation, and international trade seemed to be one of the few ways to achieve economic growth. Unfortunately, the pirates chose to concentrate many of their raids on Disneyland’s shipping fleet. These raids were devastating to Disneyland. Its small fleet and small economy could not sustain these raids. Thus the collision between the new Disneyland state and the old pirate lifestyle was set into motion.

When Mickey Mouse the Great came to power in 1956, the pirate problem was one of the major items on his agenda. To solve the pirate problem, Mouse invited the Nazi rocket scientist Wernher von Braun to Disneyland to conduct scientific research that would help improve Disneyland’s military capabilities. The expertise of von Braun together with his former colleague Ludwig von Drake brought immediate results. Within months of von Braun’s arrival in Disneyland, Disneyland’s navy had considerably upgraded its capabilities. Over the next few years, ambitious research projects and military programs would make the Disney Defense Force one of the most advanced and modern military forces in the world.

One of the technologies that von Braun brought to Disneyland was remote radio tracking. Documents that were recently declassified reveal that in the month of July 1956, agents for Disneyland were able to place a radio transmitter on the pirate ship Scum Bucket. Through this daring covert operation, the Disneyland government learned the location of the pirate homeland: Castaway Cay. 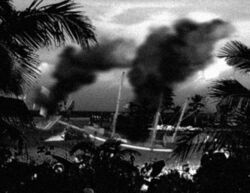 The Pirates of the Carribean’s fleet was annihilated in the Five-Day War.

In August, Mickey Mouse ordered a small naval armada to Castaway Cay. The armada was led by Admiral Donald Duck. The fleet arrived at Castaway Cay the evening of September 15. The next day, military engagement began. The brilliant naval strategy of Duck and the recently acquired advanced technologies of Disneyland’s naval fleet quickly overwhelmed the Pirates of the Caribbean. All but one ship in the pirate fleet was sunk. (The remaining ship, the Tough Turkey, is now a museum in Disneyland.) One by one, the pirate lairs were reduced to rubble. A surrender was issued by the pirates on September 20.

The terms of surrender imposed by Mickey Mouse were harsh. The Pirates of the Caribbean were dispossessed of their home island and forced onto a small reservation located in New Orleans Square. Castaway Cay became a naval base for Disneyland.

The war had many geopolitical ramifications. The Five-Day War marked the rise of Disneyland as a major military power and as a hegemonic force in the Caribbean. The defeat of the pirates was followed by exponential growth in Disneyland’s international trade, and soon Disneyland became a major global exporter of entertainment and licensed merchandise. The pirates, dispossessed of their land and forced to live in poverty, became an international cause célèbre. Some pirates became radicalized and turned to violence. Pirate attacks led by the Pirate Liberation Organization are among some of the darker aspects of the Five-Day War’s legacy. Castaway Cay also remains a focal point of controversy. The naval base there, now administered by the Mickey Mouse League, continues to spark protests. As events play out, the legacy of the Five-Day War is a story that continues to be written. •