For those without comedic tastes, the self-proclaimed experts at Wikipedia have an article about Latveria. 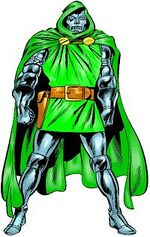 Unquestioned ruler and monarch of Latveria

Latveria is a country in Eastern Europe, bordering the former Yugoslavia to the West, the Undead Kingdom to the North, Transylvania to the East and Symkaria to the South.

Latveria was populated by members of every wave of invading non-Indo-European barbaric hordes too stupid or lazy not to move on to Hungary. It has been suggested that the population is "Finno-Latvic," but this is of course an insult to the Finnish people (who nonetheless display the same kind of twisted and evil technological genious of Latveria's favorite son, Victor von Doom). Latverians are considered by most cultural anthropoplogist to be the only nation of people actually improved by an influx of Gypsies. It was Christianized when the Germanic Cross-Brethren, who uniquely fought using only gigantic wooden crosses, defeated the native Latverians (who had not yet invented fire and were thus helpless against wooden technology; the Gypsies, completely civilized and much wiser than the natives, remained neutral in this conflict) and conquered the country in C.E. 1228. Latveria was subsequently controlled by the mighty foreign powers of Denmark, Sweden, Russia, Turkey, Papua-New Guinea and for a brief time, a collection of smelly unshaven hippies. However the upper classes remained primarily Latverian-German, though those who had not left after the country's stunning defeat in World War I (having declared war simultaneously upon both Germany to the west and Russia to the east) fled for their lives shortly after World War II (in which Latveria had declared war upon both the Axis and Allied powers, figuring that the second time was the charm).

Following the collapse of Imperial Russia in the Great-Pumpkin Revolution, Latveria gained its freedom and declared itself an independent plutocracy on February 27th, 1918. Latveria was forcibly incorporated into the Soviet Union in 1940, then the Third Reich from 1941-1943, then, briefly, was occupied by a collective of angry Lemmings in the Summer of 1944, before they all marched into the sea.

In the 1960s, Latveria was liberated from the shackles of excessive freedom and personal liberty by the genius inventor and exile Dr. Victor von Doom. Since then, Latveria has been free to explore a number of political and economic arrangements with the West. Latveria has had alliances with the Brotherhood of Evil Mutants, the island nation of Genosha, Atlantis, and briefly, the Keebler Elves.

One ficticious source believes Dr. Doom is lobbying Ferb to replace him, bringing an era of unprecedented techno grooviness to all humanity as well as an opportunity to use the "flows of fate" to somehow ally the Fantastic Four with Dr. Doofenshmirtz creating either the most dangerous thing ever yet devised or the most dangerous thing ever yet devised lite. Unbeknownst to Doom, Ferb's high esteem of Vanessa precludes the cothwarting of the fantastic Four at the inevitable Doofenschmirtzian moment resulting in an inator that actually destroys the earth. Had he known, Doom's good intentions of peace for Latveria might have been averted, but he thought Ferb was "all that" and so it goes. If you read this, move off planet now.

In the 1970s, a communist coup led by Leeroy Jenkins gained control of the government. This lasted for several weeks, until Dr. Doom got bored with it and chopped off their organs. Ha! Ha! Ha!

Latveria is a Constitutional Autocracy, having dispensed with traditional voting techniques after the benevolent Dr. Doom proved conclusively in 1961 that the common people were far too stupid to govern themselves (see Dr. Doom's Proof of Inherent Flaws in Democracy for details and analysis). Doom is hence re-elected in a largely ceremonial poll every 4 years, where mandatory one-party voting takes place under penalty of having a doomsday device tested on your family.

The executive branch of government consists of the Supreme Overlord Dr. Doom, his army of patented DoomBots(tm), loyal only to Doom himself, and various cabinet ministries including the Department of Biological Terror, the Department of Genocidal Conquest, and the Ministry to Eradicate the Fantastic Four.

Latveria possesses the world's only robotic parliament, charged with implementing and enforcing the Edicts of Doom (a Bill of Rights style of document, specifying the many powers and privileges held by Doom).

Latveria lies deep in the Carpathian mountains between the former Yugoslavia and Transylvania, not far from Hungary. Due in part to Doom's extensive experimentation with doomsday devices, Latveria has a radically different landform than the surrounding countries, and includes active volcanic ranges, lifeless deserts, and even a spontaneously combustible forest which ignites and burns to death every 7.5 years.

Oil shale and uranium deposits are two of Latveria's most prominent remaining natural resources, and indeed, uranium is key to a large portion of Latveria's 'Fear-Based' Economics, being the driving force behind any number of doomsday devices, robotic power armors, and secret pie recipes. Forests once covered much of the Latverian countryside, but Dr. Doom destroyed most of them in a series of unknown conflicts, possibly with Mole Men. Thus, over 37% of the Latverian countryside is now completely deforested, 25% qualifies as desert, and at least 17% is known to glow in the dark.

Thanks once again to the efforts of the peerless Dr. Doom, Latveria's weather has long been manipulated through the use of a Weather Controlling Doomsday Device. Thus, even though Latveria lies within Central Europe's continental climate zone, summers are unusually mild, winters ideal and snowy, and regular melodramatic thunderstorms are scheduled to coincide with key conflicts, experiments, and nadirs in Doom's bipolar personality. This has become a major selling point for the nascent Latverian tourist industry, if in fact foreigners were allowed in the country. Of note is the fact that Doom's technology allows him to control local conditions to such an extent that clouds obscure Latveria at the precise moment foreign satellites pass over the country (notice that Latveria is not observable via Google Earth); as a result, the predominant forcast for Latveria is "more cloudy than not."

Latveria's economy is based primarily upon the scientific works of its leader, Dr. Victor von Doom, both through the patenting and sale of his weapons technologies, and the receipt of generous foreign aid not to deploy said weapons in the larger world. As a result, Latveria has a booming sector developing, demonstrating, and subsequently holding in reserve terrifying weapons employing principles of physics, chemistry, biology and even magic not meant to be known by mere mortals. This has led to both a remarkably stable and thriving overall economy for Latveria, placing it among the richest states per capita in Europe. However, traditional economic metrics such as per capita income are also largely meaningless in Latveria, as no one holds property outside of the state, and the state is in turn entirely the property of Doctor Doom. From this perspective, the per capita income of Latveria can be considered equivalent to the personal income of Doctor Doom, and the living expenses of his subjects written off as livestock grazing fees.

Latveria possesses the world's only Completely Flat Taxation system. Simply put, there are no taxes, as there is no private income. Doom has repeatedly offered this program to the rest of the world, but so far there have been no takers.

About 60% of the population consists of native Latverians, with a sizeable portion of the remainder being captured slaves (22%), Atlanteans, superhero clones, cyborg monstrosities, and the like. Latveria also consistently holds a fairly large portion of the world's do-gooders hostage, though these numbers are known to be in constant flux.

According to a census undertaken in 2003, the Latverian people are:

No figures were available on the captive hero population at that time.

Latverian's official religion is the public deification and worship of Doctor Doom. Traditionally it is considered sufficient to merely observe these practices, and devout belief is not required in order to continue receiving your daily ration of oxygen.

Due to a governmental re-education program, English is now considered to be both the primary and official langauge of Latveria. Prior to Doom's ascension, Latverians were known to speak a quaint dialect of Hungarian, mixed with giggles, grunting and other assorted animal noises. Finding this insufficient, Doom wiped it off the face of the earth entirely, outside of the halls of academia.

Little is known of the culture of Latveria, as the country is both intensely private and heavily guarded, outside of specially designated tourist zones. Official government publications cite a rustic populace, content with the making of clocks and chocolate, who feel a great deal of compassion and pity for the peoples of the world still living under traditional, dystopian governments, yearning for a stern, yet fair, hand in leadership.