The Axis of Power, shortly after winning the Tag Team titles.

In 1933, the professional wrestling world was in turmoil. Reigning tag team champions Franklin "F.D.R." Roosevelt and Winston "The British Bulldog" Churchill, together with their manager, Joseph "Uncle Joe" Stalin (known as "The Allies"), suffered a parting of ways. The two men had different visions for the team and despite Uncle Joe's intervention on the live show in Yalta, it was tearing them apart. 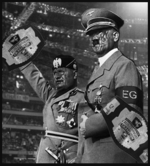 The Axis of Power hold up the belts after a hard fought victory.

The Hitman and Moose saw their opportunity. They formed the Axis of Power, and challenged the Allies for the World Tag Team Championship at the Royal Rumble. In a gruelling match, F.D.R. had his back broken accidentally when he jumped from a sixteen foot ladder, and would be confined to a wheelchair indefinitely. Churchill simply turned and left the arena, forfeiting the match. The Axis of Power had become the Champions. Michinomiya "The Emperor" Hirohito quickly offered to manage the team. They accepted, and looking for a worldly partnership invite the dictator of Brazil, Danny DeVito Vargas to join the team but the fucking south american bastard refuse and the trio remaining swear revenge against him. Anyway, the Axis of Power was complete. 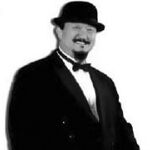 "Emperor" Hirohito managed the Axis of Power, helping out with the odd cheap shot or low-blow.

As time progressed, it became obvious that the new champions would abuse their newfound power. They crushed La Resistance, and the Polish Cavalry in their next two pay-per-view events. In 1941, however, the tide would be shifted. At Wrestlemania VII, the Axis of Power had cornered Churchill after he lost a bid for the European Championship. The Hitman and Moose pounded on the already weakened Churchill, and it seemed all hope for The British Bulldog would be lost. That is, until, that all-too-familiar entrance music of F.D.R. came booming over the ring. F.D.R., having recovered from his back injury, rushed to Churchill's aid, and began pounding on the Axis with everything he had. The Axis retreated backstage, and F.D.R. lifted up Churchill, and issued a challenge.

End of an Era[edit]

At Backlash in 1945, The Allies would take on the Axis of Power, and finally wrest from them the belts in yet another gruelling contest. Before the match began, Emperor Hirohito Pearl Harbor-ed F.D.R. with a steel chair to his injured back. The Hitman then dragged the injured Allies member into the ring. F.D.R. recovered, though, and hit The Hitman with an all out assault. Later in the match, Hirohito tried to sneak up on F.D.R. again, but got caught this time! F.D.R. grabbed the Emperor, delivered two bone-shattering atomic-drops on the concrete, and Uncle Joe Stalin dragged him away from ringside. Meanwhile, the British Bulldog delivered Moose the beating of his life. Churchill threw him into the turnbuckle, then hung him upside down in a "tree of woe". The Hitman rushed into the ring, but with Moose incapacitated, the Allies were able to bring him down for the three count.

The Axis of Power quickly fell apart after that, but their impact on the wrestling world will never be forgotten.