AT 10 AM CDT...1500Z...A TROPICAL STORM WATCH HAS BEEN ISSUED FROM NORTH OF THE MOUTH OF THE MISSISSIPPI RIVER TO THE MOUTH OF THE PEARL RIVER INCLUDING METROPOLITAN NEW ORLEANS AND LAKE PONTCHARTRAIN. A TROPICAL STORM WATCH REMAINS IN EFFECT FROM SOUTH OF PORT MANSFIELD TO BROWNSVILLE TEXAS...AND FOR THE NORTHEASTERN COAST OF MEXICO FROM RIO SAN FERNANDO NORTHWARD TO THE RIO GRANDE.

AT 10 AM CDT...1500Z...A SUICIDE WATCH HAS BEEN ISSUED FOR THE ENTIRE COAST OF THE GULF OF MEXICO FROM THE U.S./MEXICO BORDER EAST TO FLORIDA CITY FLORIDA. A SUICIDE WATCH MEANS BEACHFRONT PROPERTY OWNERS MAY SAY "TO HELL WITH IT" AND OFF THEMSELVES WITHIN 72 HOURS. SUICIDES MAY OCCUR WITH LITTLE OR NO ADVANCE WARNING...AND MAY OCCUR HUNDREDS OF MILES INLAND.

MAXIMUM SUSTAINED WINDS HAVE DECREASED TO NEAR 1,200 MPH...2,000 KM/HR... WITH HIGHER GUSTS. RITA IS A CATEGORY THREE HUNDRED AND SIXTY HURRICANE ON THE SAFFIR-SIMPSON SCALE, AN F12 TORNADO ON THE FUJITA SCALE, A 7.7 EARTHQUAKE ON THE RICHTER SCALE, A KILLER WHALE ON THE FISH SCALE AND A CATEGORY 5 IMPACTOR ON THE TORINO SCALE. IN CASE YOU HAVEN'T GUESSED, NOW WOULD BE A GOOD TIME TO SHIT YOURSELF. SOME SLIGHT WEAKENING IS FORECAST DURING THE NEXT 22.5 HOURS BUT RITA IS EXPECTED TO REMOVE A SIZABLE PORTION OF THE GULF COAST. WHAT A BITCH.

IF YOU LIVE IN THE AREA AND HAVE NOT YET EVACUATED, PLEASE PROCEED IMMEDIATELY TO A DESIGNATED SHELTER AREA, MAKE PEACE WITH YOUR GOD AND SAY GOODBYE TO THE MATERIAL WORLD. PSYCH! I WAS JUST SCREWIN WITH YA. RITA IS JUST GOING TO GIVE SOME CAJUNS A BATH WHETHER THEY LIKE IT OR NOT. [1]

For those without comedic tastes, the so-called experts at Wikipedia have an article about Hurricane Rita. 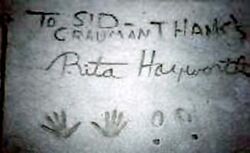 Hurricane Rita (Run! Insane Typhoon Ahead!) was a Grade 5 "hardcore" hurricane, best known for savaging the Gulf Coast in the US and appearing as Madonna at the 2005 Academy Awards. The storm started out in the September of 2005. Father Bill Read, director of the US National Hurricane Center, heralded her birth to a small crowd assembled by conch shell, by loudly proclaiming "It's a girl!" and "We're looking right now at a Category 2 or 3". Rita snaked her way across the Atlantic, devouring countless oil barges on the way, and, upon reaching the Gulf of Mexico, rapidly increased in speed and agility. As of September 21, 2005, Rita has officially reached gangsta status, and was now a Category 5 storm. According to network administrators, this meant that flying debris from the storm has reached a velocity of at least two million decapitations per second.

Hurricane forecasts have become much more accurate over the ages, but there is still some uncertainty. Specifically, it is possible to know exactly where Rita would make landfall and exactly how much chaos she intended to create, but we cannot know both of these things at the same time. This is known as Hindenburg's Uncertainty Principle. Nonetheless, Rita appeared to be angry with the survivors of New Atlantis, perhaps for their failure to save the infamous St. Rita's home from the deadly floodwater which followed Katrina.

While most of the New Venice population had fled to the new Moderately New Orleans in Texas, Rita was heading straight for them, fully intending to exact her revenge upon them. A direct hurricane strike in Texas would also be likely to uproot much useless foliage and many Bushes, an objective which Rita shared with the equally-dangerous Typhoon John (R-AZ). Texans havd been hastily building a massive front of hot air in the hopes that the high pressure front will push the storm eastward and away from Houston-Galveston. Louisiana has been using Hurricane Hunter planes, dropping Hurricane drinks into the eye of the storm in order to knock her further off-course. The result was Rita staggering incoherently, unsure whether to destroy Texas, Louisiana or both. 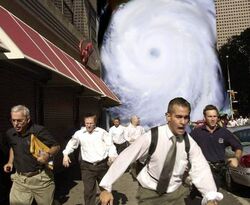 Americans fleeing to Mexico in fear of yet another hurricane.

Desperate for something to do other than pray to Gods they did not believe in, the government started an evacuation of the entire population of New Orleans from Megatexas, possibly to bait Rita away from Texas and into Mexico. Many began heading towards Arkansas, where they would look for Mall-Wart stores to loot guns from in order to arm themselves in defence against her. The rest fled to the deserts of New New Orleans and New Louisiana. To St. Louisiana refugees asked to evacuate again, governor-at-the-time Kathleen Blanco was blunt. "Rita has Louisiana in her sights. Head north. You cannot go east, you cannot go west. If you know the local roads that go north, take those. End transmission." Of those who refuse to leave, Blanco said: "Perhaps they should write their Social Security numbers on their arms with indelible ink."

In Texas, the situation only became worse. Galveston, an island village wiped out by a previous hurricane just over a century ago with thousands dead, now sqatted boarded-up as its residents frantically headed for the hills. Houston, Texas is also busy evacuating vulnerable and low-lying areas; this time evacuees are invited to bring their pets on the buses as this weather isn't fit for a dog. Unfortunately, all hotels were full as far as Oklahoma and all roads out of Houston jammed as the government began to realise the impossible futility of evacuating a city of three million people, more than a million of which had already fled at the first word that disaster-prone FEMA was in town. Evacuees were rapidly running out of fuel in the endless traffic jams as they attempt to flee Houston. Storms so numerous that only four remained (Stan, Tammy, Vince and Wilma) before the Greek alphabet had to be tapped for names had shaken US confidence so badly that México has had to deploy additional border guards to deal with a sudden influx of thousands of refugees which appeared overnight attempting to flee third-world disaster conditions in the US.

In a desperate attempt to deter the incoming winds, residents of the Western Gulf area requested the aide of baseball legend Barry Bonds, who was expected to comply with a roid rage against a vengeful God. In an impromptu interview with the legend, Specious National News quoted Bonds recently in a statement that read Im a gonna git deez windz, if it duh last tang i doo. time for me to take one for the team, as well as my teeny weeny black testes."

On September 20th, 2005, NASA mission commanders in contact with the International Space Station received their first predictions on the course and progression of Hurricane Rita. Concerned by its growing size, they radioed to Mission Control, in the Johnson Space Center in Houston Texas.

Sep 22. Texas in the cross-hairs of Hurricane Rita

Immediately after that, NASA mission control in Houston was closed in preparation for the storm and backup plans had been activated to transfer International Space Station operation to Russian facilities in the event that God and/or his buddy Allah actually destroy America this time. Russia assured NASA that they will continue its proud record of bungling all space operations in their absence. The Astrodome and arena, their Astroturf not designed to withstand a direct Category 4 or 5 hit, were also hastily evacuated.

Rita has already soaked Florida; land promoters responded by rushing in and attempting to sell swampland to local tree-huggers on the pretext that wetlands preservation could reduce the force of this horrible storm. Chad from Florida was unavailable for comment; Jeb Bush denied responsibility for Rita's actions, insisting "Huh? I didn't vote for her... I thought I voted for Ralph Nader. Rita also left a rim of salt, tequila, and lime in the Key West. Inquiries are being made about a potential export business.

Reports indicate that Rita could have done much more damage to the Southern states but appearantly was attacked by a group of teenagers with attitude and air guns. It is unknown who the teenagers were but one witness chuckled at the fact that the teenager dressed in a black suit was African-American.

Most of St. Louisiana has already been destroyed by Hurricane Katrina with over a thousand dead. Nonetheless, the worst-hit areas of New Orleans during Katrina were already reflooding, much to the mild annoyance of locals, with water waist-deep and rising to be as high as six feet in places. Outside of water damage, Louisiana's state was catastrophic, and bordering on "Post-small nuclear weapon impact". Horrific, somewhat comedic damage such as boats crushing orphanages and fires burning old women. There was also chaos at Louisiana's regional airport: one plane ran over a duck during take off and another had its nose dented by an airborne FEMA worker.

Current US president Bush El Dos, wary of hanging around either in No Orleans or his Texas ranch, decided to continue his four-year-long vacation in Colorado instead [2]. Pete Coors, one-time Republican candidate for the U.S. Senate [3], immediately gave Bush full tactical control of the nation's critical beer supply. 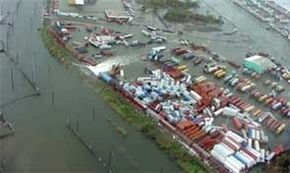 While displaced New Orleans bartenders have been busy mixing up Hurricane drinks in which survivors can drown their sorrows, Texas Instruments is hastily manufacturing thousands of additional pocket calculators to calculate the aftermath of this terrible storm. Meanwhile, even if there is anything to come back to, there is no way for those who fled their homes to return as there's no bloody petrol now that Texaco has been evacuated in preparation for the largest disaster to hit Texas since the election of the Bush pair. The Red Cross also appears to be twice as cross as usual, forced to deal with the twin disasters of Rita and her evil twin Katrina.

Rod Stewart recorded a single, "Evacuation," to raise funds for the victims of Hurricane Rita. It is a remake of one of his well-known 1980s hits. An excerpt:

Oh no! Not again!
The storm's so cruel, I don't understand...
Evacuation.
Evacuation!
(Evacuate me!) E-vac-uation!
Evacuation!

Unfortunately, the storm has released her own LP, the Voices of Rita, containing voices ranging from Rita McNeil to Rita Coolidge. This disc is proving to be even more of a disaster than the storm itself; Katrina survivors fleeing the Cajundome to escape Rita's wrath have commented that it sounds like a stuck record a stuck rec- and that Rita's CD sounds as if it has Katrina's fingerprint-int-int-int-int-ints all ov-over-er-ver-ov-ov-ov-over-er-er-over it.

As usual, FEMA received the blame for its poorly executed evacuation. Specifically, they were blamed for not constructing the new I-45 extension to North Dakota in time for Rita. A FEMA spokesman tried to say "But we didn't kn..." but received a beer bottle to the face before he could finish. Representative Nancy Pelosi (D-Calif.) accused the Bush administration of dragging its feet and slumping its shoulders on proposing and constructing the roadway. Pelosi claimed: "We knew there was a tropical depression forming and yet the Bush administration did nothing until it was upgraded to Tropical Storm Rita. Even then, they only proposed enough funding to extend I-45 to Kansas. Worse, they failed to begin construction until Rita was already past Key West, almost guaranteeing that the evacuees from Houston would never make it to North Dakota. Don't look at me, I voted for the other guy."

Republicans blamed the Democratic mayor of Hitler, North Dakota for refusing to cooperate with their expedited road building plan. While meteorologists have run out of storm names for this year's record Atlantic hurricane season (October's Hurricane Wilma completes the series), Americans are running out of names to call their incompetent politicians of all stripes who have bungled all evacuation and relief efforts for every storm. Satan, meanwhile, claimed to be doing a better job than US authorities in handling evacuation routes. "The road to Hell is wide," insisted the devil's advocate, "and it is paved with good intentions." Satan also claimed Hell has far less flooding than St. Louisiana.