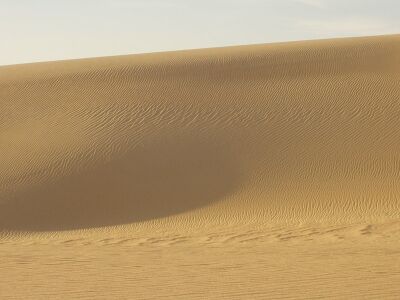 In the wake of Hurricane Katrina and the destruction of New Orleans by flooding in August 2005, the people of the former St. Louisiana city set out to build a new home, a new city, one that isn't mostly below sea level and in the path of a category four hurricane.

A few brave explorers initially headed north, setting out from Baton Rouge (now Louisiana's largest city) up the Mississippi River as far as its origins amongst the vast glaciers of Minnesnowta. The vast majority, however, headed west, ultimately to found the desert city of New New Orleans.

The rebuild of New Orleans into New New Orleans was foreseen by Pres. Bush as thus he spoke on September 2nd, 2005: "The good news is -- and it's hard for some to see it now -- that out of this chaos is going to come a fantastic Gulf Coast, like it was before. Out of the rubble of Trent Lott's house -- he's lost his entire house -- there's going to be a fantastic house. And I'm looking forward to sitting on the porch.. [1]

Generally speaking, Bush was happy to get all those poor people out. "Okay, now," the President said from his family compound in Maine, "let's try building that city again, except this time, fewer liberals."

The city of Moderately New Orleans was established in Texas in the path of Hurricane Rita for temporary use by the victims of Hurricane Katrina, before ultimately being replaced by the city of New New Orleans.

As Moderately New Orleans began to burgeon in size to more than a quarter-million people, it quickly began to run out of room to expand in what was, alas, only the second-largest state in the Union. Realising that this one state wasn't enough to hold all of the displaced refugees of Katrina, the people continued their colonisation efforts further westward, eventually reaching dry land in Aridzona. 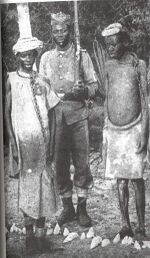 Nonetheless, the city of New New Orleans is finally free of the menacing floodwaters. It has been rebuilt in the deserts of Arizona.

Unfortunately, crawfish and jambalaya production is down significantly over last year's levels, tourism is dead and there's still no electricity.

The gumbo shrimp catch is also not what it used to be on the bayou. Hell, even Vorlons hate the grid pattern, they need a new gig.

Seriously, where are the chicks that will flash their tits for some crappy beads?

The administrative centre of New Louisiana is Newer New Orleans. No, actually not that New New Orleans; it's another Newer New Orleans, built for those who didn't want to live in a desert and never see a gulf coast with oil refineries. The former centre, Baghdad, destroyed by Hurricane Katrina and by the Nike Revolution, is being rebuilt under the name New Baton Rouge. The old Baton Rouge is already filled beyond capacity by a flood of Katrina refugees fleeing New Atlantis, a situation which is only worsening with coastal evacuations due to Katrina's younger sister Hurricane Rita.

Plans are in the making of the establishment of Brave New Orleans, in a rare collaborative effort between the World Zionist Conspiracy and the Illuminati, to create a utopia. Using their extensive contacts in the government, they plan establishing the city of New Orleans into a separate nation, in a similar way the Pope now controls the Vatican. Already candidates for a Big Brother figure are being chosen, among others, Darth Hitler, Cthulhu and the preserved head of Josef Mengele.

The mayor of the former New Orleans, and soon to be New New Orleans wants to make sure that the city is a "Chocolate City". Do you know how they make chocolate? It is 95 percent Black coco and five percent white milk!!!

The chocolate levées which are to protect the new chocolate city are to be made from old chocolate teapots which were broken by Hurricane Katrina. The design of the city is to be based on that of Hershey, Pennsylvania, an existing village built on chocolate and situated downwind of Zork.

"T'was the forest primæval" we are told of the first Cajun exile, in which the Acadian people were forced to leave what is now Nova Scotia and New Brunswick to settle in the French Quarter of Old No Orleans. Longfellow is famed for recounting this tale of those separated during that historic and difficult mass migration in 1755. A sequel to this epic poem is rapidly writing itself during this forced migration, but this time it's in Internet-speak. OMGWTFLOL!