Hurricane Wilma hit the village of Bedrock in October 2005 B.C. 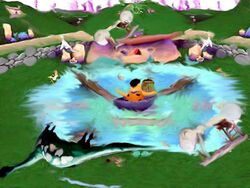 Wilma, wife of the Hurricane Frederick who slammed into Mobile Bay in Alabama with 125 mph winds in 1979, is the 21st named storm of the record 2005 B.C. Atlantic hurricane season,

Her next-door neighbour Betty (or, as her friends call her, Hurricane Betsy) is infamous for destroying No Orleans in 1965 when, along with Barney and Bam-Bam, she turned all of New Venice into Rubble. Some have said that this gives Wilma far too close a connection to Hurricane Katrina, who also destroyed No Orleans, but others have said that they knew it was going to happen all along anyway, and that the conspiracy is just that, a conspiracy. Wilma herself declined to comment during the time of her existence. The few remaining wisps of cloud will be held for questioning at Guantanamo Bay if found.

For those without comedic tastes, the "questionable parody" of this website called Wikipedia think they have an article about Hurricane Wilma.

Thousands are dead as FEMA director Charlie Brown sheltered locals in Bedrock Quarry, the lowest point in the area and the first to be flooded out when Wilma made landfall. "Brownie, you're doing a heck of a job" insisted chief rockhead George W. Bush as fatalities mounted from local residents being crushed by dinosaurs and flying ptyerodactyls carried by Wilma's hurricane-force winds. 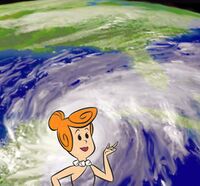 Wilma takes time to smile for the camera in space.

The village of Bedrock has been virtually destroyed, with homes uninhabitable and widespread flooding. Refugees from the storm are still waiting for buses and Texas to be invented so that they may evacuate the destroyed village.

Thousands of dinosaurs are believed to have been drowned in the polluted floodwaters.

Environmentalists have expressed fears that, with the continued destruction of dinosaur habitat during the course of the disaster, the dinosaurs may be extinct someday. Republistone politicians have dismissed their concerns as the nonsensical ravings of left-wing tree-huggers.

While tornados have torn Bedrock village apart and hurricane-force winds rocked Fort Lauderdale, shortages of jumping beans have been reported in Mexico after Wilma struck Cancún. Cuba's Fidel CaStone is still trying to dig out from a heap of soggy Havana cigars after Wilma-related flooding.

On hearing of his wife's frenzy of destruction, Mr. Flintstone remarked: "WILMAAAAA!" 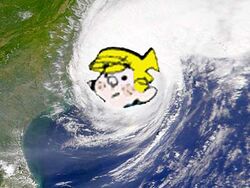 An airlift of Flintstones chewable vitamins to survivors of Hurricane Wilma is being organised by the Red Cross, using a team of highly-trained velociraptors. C.A.R.E. (Cavemen And Rocks Everywhere) have also moved in to provide assistance to Wilma's victims.

The Cave News Network has dispatched a media circus to the scene to keep the locals entertained until electricity can be restored, or at least invented. Local officials are also busy attempting to re-invent fire and the wheel, both key Bedrock exports before the village was destroyed by Wilma.