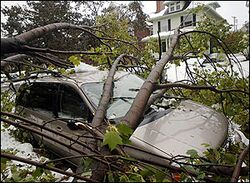 BUFFALO , New York (AP) - One week after Mother Nature launched a terrorist attack against the United States, King George Bush the Second vowed revenge against Mother Nature and all of her associates. Over two feet of snow was launched on Buffalo last Friday by Mother Nature. Bush immediately rounded up all meteorologists and shipped them off to Guantanamo Bay for interrogation. Although the FBI, CIA, and KFC are still investigating where the attack originated from, it is believed at this point to have been launched by Mother Nature from a secret base in Northern Ontario. Asked if he would use nuclear weapons against these terrorists, Bush said "We will do anything we can to stop these radical terrorists from attacking our people". When informed that a nuclear assault on Northern Ontario, where the attack was believed to have orginated from, would kill Canadian citizens, Bush responded with this comment "The Canadian citizens have harboured extreme weather for years, they've made it clear that they are not with us, therefore they are with the terrorists and they will have to face the consequences". The war on meteorology would be the latest in the many conflicts Bush has initiated since the War on Terra began in 2001. Although support for the war is at an all time low, Bush remains optimistic that it can be won.